Man fell in the harbour

A 57-year-old man from north Jutland was involuntarily a cold surprise, as he Saturday night would jump ashore from a boat in Ålbæk Port. On the smooth landin A 57-year-old man from north Jutland was involuntarily a cold surprise, as he Saturday night would jump ashore from a boat in Ålbæk Port.

On the smooth landing stage he lost his foothold and fell into the water, there was only a few degrees above freezing.

another man at the port, saw it happen and got a hold of the man in the water. However, it was initially not possible for the helper to get the 57-year-old pulled up on land.

"We got notification at. 19.25, and pretty quickly we got sent a patrol up there, as was the promotion of 10-15 minutes. In the meantime we found with the help of our display systems through to someone who lived nearby, and asked them to go down there to help. The man, who in the first place had got hold of him, could not get him up alone," says vagtchef Karsten Højrup Kristensen from The Police to the B. T.

"then They came more and got him pulled over to a place where it was easier to get him pulled up. He had been on the road from a boat landing stage, where he then falls or slips, then he falls in the water. It could easily have gone very wrong if there were not others present, for the water was møgkoldt for now to say that it is in good but," adds vagtchefen.

The 57-year-old man lives right near the harbour and was left there to get dry clothes on, after he had been attended to in the called the ambulance. There was no need to run him to an emergency room.

1 Dane scores in Brentfords målfest in England 2 FC Copenhagen wild hours: So pressed are they before... 3 Boris Johnson criticises the parole of terrorist 4 Now, it should be over: the Coop calls for ban on... 5 Regeringskritisk duo wins the presidency in the German... 6 Hareide will further: Finland must be taken very seriously 7 Media: Verhagen has even participated in forgery 8 Young jamaicaner bombs Bayern away in Munich 9 Icy Dolberg shows the EM-form: See his bombermål... 10 Happy Delaney: 'Wales had been worse than Finland' 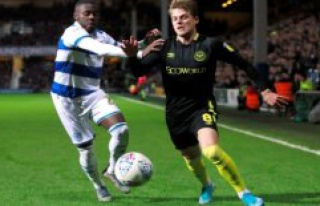