There must roll heads NOW

Dear politicians and officials in government service. you need to know that, in the population is a wonderment about the many scandals with the state's money you need to know that, in the population is a wonderment about the many scandals with the state's money, which is currently being revealed.

There is a lurking rage over the fact that it can be done, to cheat and defraud several hundred million crowns, which are often discovered by chance.

There is a total lack of understanding of why it rarely gets any serious consequences. Often, there are no responsible - as in Britta's case - or excuse those responsible and moving on in life.

the Scandal in the ministry of defense, where employees of the department of defense Ejendomsstyrelse have been taken in fraud, forgery and corruption is immense.

It is almost unfathomable in the world's least corrupt country.

Employees have received the goods and services, such as husombygning, as Properties subsequently paid. Companies have contributed to the omfakturering, for later to get in on the other orders with the department of defense Ejendomsstyrelse.

The whole thing is funded by the state money - or more precisely you and me.

so far, two employees, Hans J. Høyer, director of the board, and Per Pugholm Olsen, koncernstyringsdirektør, exempt from service, as it is called. They are removed from their jobs, but they are not fired. The one is transferred to another service, and the other has a åremålskontrakt.

They have rights, says the secretary of defense, and therefore they cannot directly be fired.

the Case of the big millionsvindel are only detected because an adventure økonomimand in Holstebro wonder about the agency's sham bills. He returned the case, after which it begins to roll.

It is not the department of defense Ejendomsstyrelse, who even discovers the fraud. Therefore, there is now a costly work in progress to ensure that this does not happen again. It is otherwise quite normal practice in private companies that have control systems that prevent this, but obviously not in the defense department.

Here sits the director Thomas Ahrenkiel, the ministry's chief executive, who has been known to be the case for months - since april - without saying it to anyone. First, the 4. december he found it necessary to inform the minister of defence Trine Team.

In a startling letter to the minister regrets and apologizes he subsequently several times, that he had not previously seen the scale of the case and informed both the former and current secretary of defense.

It is truly unprofessional and lack of due diligence. Ahrenkiels letter to the minister open to the possibility that he has not been informed in a timely manner.

'When an error of this nature may occur, do I assess that there is a need for a formalization of departmental processes...' he writes to the minister.

Unfortunately, mr Thomas Ahrenkiel, your time is spent. The wording is a pure tilståelsessag.

the Ministry is not working, when a case such as this does not of itself come forward to the minister.

the Scandal in the ministry of Defence has grown because of the director and his lack of handling. Therefore, he must take the consequence and leave the post. If he can't see it, he must be helped.

The public system, supported by our tax payments, can only work if we believe that the money is being spent wisely and with care.

Britta-the case, the tax issue and now the department of defense information about don't provide much reason to believe in it.

We will have some confidence back, and therefore there must now roll heads.

Start with the director and the two directors.

1 Good economy looks to throw the record-breaking car... 2 New technique can extend the avocadoers life in the... 3 Roxette singer Marie Fredriksson is dead 4 Two deadly bombs found at the school in Hong kong 5 Denmark has many enemies in the first ministerduel... 6 High court looks with strict eyes on the boy's violence... 7 Bodega get banned from live music 8 Mette Frederiksen: Cheating in agency costs in the... 9 Denmark climbs up on the klimaliste - get complimented... 10 B. T. reveals: Former McLaren boss should help Magnussen 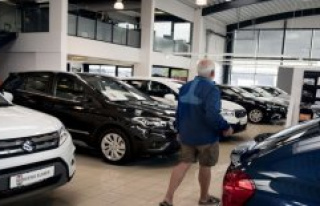