Unemployment is reduced by 99,512 people and falls below three million driven by the tourist campaign

The reactivation of tourism at the gates of the summer campaign continues to encourage the labor market in Spain in a traditionally good month for employment. 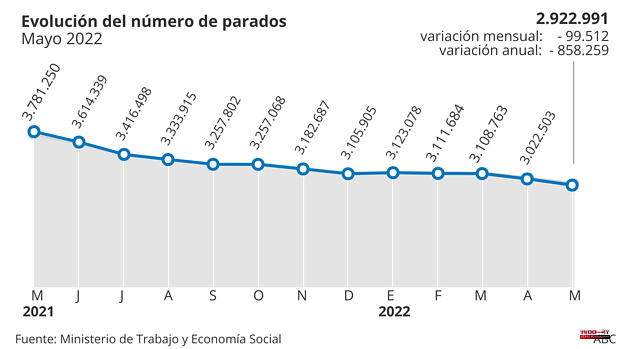 The reactivation of tourism at the gates of the summer campaign continues to encourage the labor market in Spain in a traditionally good month for employment. In May, unemployment fell by 99,512 people and fell below three million for the first time since 2008, to a total of 2,922,991 unemployed. On the employment side, a total of 213,643 jobs were created, reaching 20,232,723 average affiliates.

The upward trend in permanent contracts also continues. The total number of contracts registered during the month of May was 1,640,595. This figure implies a rise of 95,287 (6.17%) over the same month in 2021. It should also be noted that 730,427 new permanent contracts were signed, the highest figure in any month of the historical series, as highlighted by the Ministry of Labor.

Unemployment was cut in all sectors with services in the lead thanks to the start of the summer campaign and the reactivation of tourism after the pandemic. Thus, the number of unemployed fell by 64,230 people in services in May, followed by construction, which recorded 10,008 fewer unemployed; agriculture, with 8,693 fewer unemployed; the group without a previous job, where it fell by 8,613 people, and industry, which registered 7,968 fewer unemployed.

For its part, Social Security added 213,643 average affiliates thanks to the push of the hotel industry, which gained 83,400 contributors at the start of the tourist campaign. The number of affiliates thus stood above 20 million for the second consecutive month and ended May with a total of 20,232,723 employed. The Minister of Inclusion, Social Security and Migration, José Luis Escrivá, celebrated this Thursday the "good data" of affiliation for the month of May despite the "context of international uncertainty and volatile and persistent inflation."

1 A 51-year-old cyclist dies after colliding with an... 2 They investigate six people for stealing forty competition... 3 The first Canarian hotel opens in Thailand, with 30... 4 Unemployment falls in Castilla-La Mancha with 6,142... 5 Eleven slightly intoxicated by smoke inhalation in... 6 Almost 5,000 Castilians and Leonese leave the unemployment... 7 The Champions Burger 2022 in Valencia: dates, location,... 8 The PP of Castilla-La Mancha would obtain 14 deputies... 9 The daughter of the leader of the network that exploited... 10 The Canary Islands gain 2,028 Social Security affiliates... 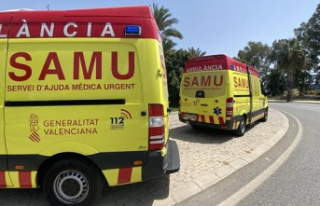 A 51-year-old cyclist dies after colliding with an...