Russian officials stated that their demand for "unfriendly countries" to pay natural gas in rubles doesn't mean that supplies will be stopped immediately. 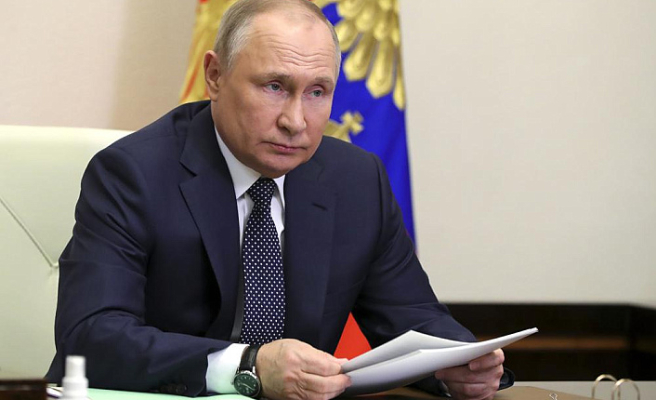 On Friday, gas used to heat and generate electricity still flowed from Russia to Europe.

Dmitry Peskov, a Kremlin spokesperson, stated that payments on shipment in progress must be made "not this very day but somewhere in the late April or early May."

However, he signed a decree that states countries can pay foreign currency to Gazprombank. Gazprombank would convert the money into rubles to pay for the gas. The bank and Russian authorities had 10 days to make arrangements.

Putin's measure is applicable to countries that are considered "unfriendly" by Russia for imposing sanctions on Russia's war in Ukraine. European leaders have been considering what this shift might mean.

Experts believe it is an attempt to prop up ruble, which has fallen in value due to sanctions, but has since bounced back . However, the impact on the currency would only be minimal.

Putin's demand has shaken energy markets and raised concerns that it could signal an abrupt cutoff in supplies to Europe. Europe is highly dependent on Russian natural gas and would be severely affected by a sudden cutoff. Russia is also dependent on oil and gas sales to generate a large portion of its government revenue, even though its economy has been under severe pressure by Western sanctions.

German officials stated that contracts require payment in dollars and euros for gas and they must be continued.

Officials would not go into detail about the impact of Russian demands. Beate Baron, spokeswoman for Economy Ministry, stated that Gazprombank was given 10 days to explain the procedure. "And of course we'll in turn examine that."

The International Energy Agency announced Friday that its members had agreed to release additional oil from their emergency reserves to alleviate market turmoil caused the war.

Although the Paris-based agency didn't say how much it would release, it said that details would be provided next week. This comes a month after 31 IEA members, including the United States, declared that they would release 62.7 millions barrels of oilto alleviate shortages.

In an effort to lower energy prices, the U.S. President Joe Biden also ordered Thursday's release of 1,000,000 barrels of oil per daily from the nation’s strategic petroleum reserve for six month.

1 The UK is suffering from high energy prices. It is... 2 7 Engineering and Technological Advances From All... 3 Could The Future Of Web3 Have Local Communities Determining... 4 Reasons to Bet on Horses at a Casino 5 As Reddick and Briscoe crash, Kyle Busch wins Bristol... 6 Celtics win 115-114 thanks to Tatum's layup at... 7 "Classic Chris," a stellar down stretch,... 8 Congress seeks to compromise in order to increase... 9 Launch of US intelligence satellite from California 10 As tensions rise, Gaza militants launch rockets into...

The UK is suffering from high energy prices. It is...