Prices record a historic rise and the inflation rate shoots up in June to 10.2%

The Consumer Price Index (CPI), the statistical indicator that measures the evolution of the most common shopping basket in Spain, exceeded the 10% barrier in June for the first time in four decades and stood at 10. 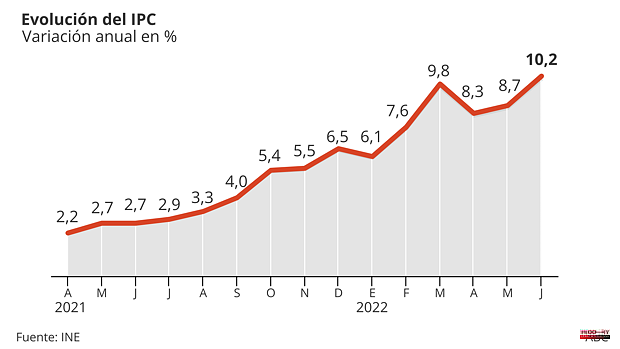 The Consumer Price Index (CPI), the statistical indicator that measures the evolution of the most common shopping basket in Spain, exceeded the 10% barrier in June for the first time in four decades and stood at 10.2 %, an unusual level since the country is part of the Europe of the euro. The rise in the price of fuel and the increase in the cost of fresh food, closely linked to the other factor, have been the causes indicated by the National Institute of Statistics (INE) to explain this new rise in prices that in less than two months has forget the occasional deceleration in the increase in the cost of living that took place in April in the heat of the package of measures adopted by the Government.

The Executive has spent more than 6,000 million euros of public resources trying to clamp down, unsuccessfully, on the biggest price escalation since the 1980s, without this effort having had any visible results to date. From the Ministry of Economic Affairs they insist on maintaining that without these measures the CPI would be between two and three points above the levels it shows now, but the data released by the INE to date reveal that this impact is being much less and doesn't even get to the point.

This, in fact, has been one of the sources of discussion that has worsened the climate between the Ministry of Economic Affairs and the INE in recent months and whose most obvious consequence has been the resignation "for personal reasons" of the until last Monday president of the institution, Juan Rodríguez Poo, after a succession of public ear pulls by different ministers of the Sánchez Government.

Not even the entry into force in the second part of June of the so-called 'Iberian exception' and the cap on the price of gas used to generate electricity that aspired to cut the price at which electricity is sold in the pool has managed to tie down the evolution of prices, which are no longer an exclusively energy phenomenon. The information provided this Wednesday by the INE reveals that the underlying CPI, the indicator that shows the evolution of prices without energy products and fresh food -whose evolution is traditionally more volatile- and which is considered the most reliable indicator to measure the real increase in the cost of living was 5.5%.

Prices in June rose by 1.8% compared to May, driven by the rise in fuel prices, which the 20-cent bonus has not been able to mitigate, fresh food and more than likely by the proximity to the beginning of the summer tourist campaign. The interannual rate of the CPI rose 1.5 points and stood at 10.2%, the highest rate in more than 37 years, specifically since April 1985, according to advanced data published this Monday by the INE.

This is an increase of one and a half points above that registered in May, and exceeds the historical record reached in March of 9.8%. The increase in June was mainly due to the rise in fuel prices, higher this month than in June 2021, and the increase in food and non-alcoholic beverages, compared to the stability registered the previous year. The increase in the prices of hotels, cafes and restaurants, higher than last year, also had an influence.

For its part, the estimated annual variation rate of core inflation (general index excluding unprocessed food and energy products) increased six tenths, to 5.5%. If confirmed, it would be the highest since August 1993.

1 One in three Spaniards cancel their vacations this... 2 Sánchez: «You have to be empathic with those who... 3 They attack a woman with a knife in an Illescas hostess... 4 The concessions of Finland and Sweden for Turkey to... 5 How are non-contributory pensions after the increase... 6 Former boxer Mike Tyson: "The three years I spent... 7 What are the protocols and what to do if you test... 8 Rueda censures the docility before the Government... 9 The first inclusive entrepreneurship project promoted... 10 The judge releases the alleged cryptocurrency scammer... 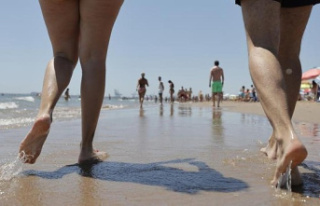 One in three Spaniards cancel their vacations this...