The Vocento ABC headquarters this morning hosted a new edition of the ABC Sustainable Economy Forum in which, in person and online, it was possible to follow the reflections of Isabel Garro, global manager of Leadership in Sustainability at Acciona (the company that sponsored the conference ), Valvanera Ulargui, General Director of the Spanish Office for Climate Change, and Sergio Bonati, WWF Climate and Biodiversity Technician. 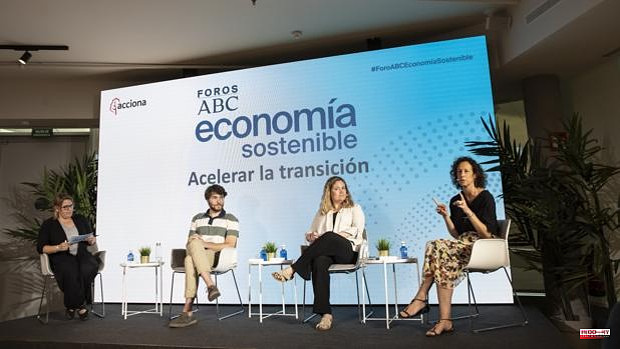 The Vocento ABC headquarters this morning hosted a new edition of the ABC Sustainable Economy Forum in which, in person and online, it was possible to follow the reflections of Isabel Garro, global manager of Leadership in Sustainability at Acciona (the company that sponsored the conference ), Valvanera Ulargui, General Director of the Spanish Office for Climate Change, and Sergio Bonati, WWF Climate and Biodiversity Technician. The event could be followed on social networks with the hashtag

Charo Barroso, head of ABC Natural, led the round table 'Accelerating the transition' in which it was highlighted how the climate emergency is a fact, with examples such as the reduction of vertebrates by more than 68% since the 1970s; the more than seven million people who die in the world every year as a result of pollution; the calculation, by 2050, and if solutions are not found, of more than 200 million 'climate refugees'... Time for renewable energies versus fossil fuels (a process that, in any case, and as was mentioned during the presentations , needs a transition period, even more so in times of crisis like the current one).

For this reason, and in the context of accelerating decarbonization with the 2050 horizon (Bonati stressed that WWF marks it in 2040), the importance of facing this problem in a holistic, global way was highlighted, from people to public institutions, with special emphasis on what has been done and planned in the European Union, thanks, in recent years, to the Next Generation funds, to the REPowerEU Plan project (and by institutions such as the United Nations Intergovernmental Panel on Climate Change at the global level or the National Plan of Energy and Climate in the Spanish case). A present and future model in which it is necessary to speed up, as Ulargui highlighted, in an efficient manner, "with 2030 as a turning point, in transversal actions, in which we all participate, with eco-efficiency as an objective... and we are not going for the good way. For this reason, technological innovation must be applied in all sectors.”

«We are talking (Garro pointed out) of a problem of such dimensions in which we have no options to choose, with unpredictable evidence in the future such as the rise in global temperature (the World Meteorological Organization indicates that the increase of 1.5, 2 degrees Celsius can be achieved not in 30 years, but in four). In this context, the participants also addressed the importance of raising awareness about efficient energy use (as in the case of the media), avoiding supply problems, etc.

A common task, as highlighted by the participants, to be taken into account in the General State Budgets and in the business models of public and private companies, as a boost to a decisive vector of economic and social development, of consumers, companies and institutions responsible (in fact, it was highlighted during the conference how in the 'horizon 2050' sustainability will bring net benefits). Sustainability, therefore, is not that it is inalienable but that it will also be profitable.

Bonati pointed out, for his part, the importance of "deciding well where we allocate the resources we have... since there are certain countries that are still interested in classifying as 'green' energies that are not, when renewables can already be classified as mature ». A reflection of full force, when voting, on July 6 in the European Parliament, if the investment in gas and nuclear energy can be classified as sustainable. Any change in the taxonomy would mean "a delay in the acceleration", as highlighted by the Acciona representative: "for our part, we have research projects with our suppliers on 'zero emissions' in materials such as cement or aluminium, we have a headquarters with 70% natural elements…” (in fact, the development of infrastructure is linked to the achievement of between 72% and 92% of the goals of the SDGs, beyond its effects on increased productivity and job). In any case, the importance of regulatory adaptation to a reality such as sustainability was vindicated, for a more efficient and hopeful transition from a potential 'grey' future to a 'green' one.

Ulargui took advantage of one of his speeches to underline the involvement of society (with special importance in the involvement of youth): "The support of the public is enormous, and it is important to involve them in this task, inform them of actions such as, for example, the National Adaptation Plan with different sectoral plans. In this sense, we have consultation processes, in citizen assemblies, which have offered us up to 172 recommendations in different aspects (consumption, health, ecosystems, etc.)». A process that entails a responsibility for the population as a whole, as Bonati pointed out: “We must ensure that there is a concentration of facilities in rural areas where the population has to be forced to abandon their economic activity. There must be efficient territorial planning, a real challenge in the midst of a demographic challenge»

1 The Swan World Cup arrives in Valencia with a high-level... 2 Real Madrid dispenses with Laso, legend of the white... 3 Wide Spanish representation in the European 49er and... 4 Fernando Lamadrid Rodríguez, European Windsurf Champion 5 Rain hampers the search for missing glacier avalanche... 6 Putin declares victory over the Luhansk region in... 7 These are the numbers that Pablo Laso leaves as coach... 8 Complete guide to the lighthouses of Andalusia 9 The new discounted dress of Queen Letizia in Barcelona 10 Manuel Lara, producer of Bad Bunny: "Collaborations... 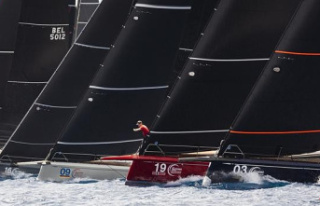