On Monday, EU leaders will meet for an extraordinary summit. But one diplomat said it best: "What are you going to discuss?" On Monday, EU leaders will meet for an extraordinary summit. But one diplomat said it best: "What are you going to discuss?"

There are many serious issues on the agenda. They revolve around the conflict in Ukraine. It is unlikely that the main, unresolved issue will be brought up for discussion.

This is the EU's beleaguered attempt to ban Russian oil imports.

Nearly a month has passed since Ursula von der Leyen, President of the European Commission, announced her plans.

She stated that there would be an import ban on all Russian oil, pipelines, seaborne, and pipelines, as well as crude and refined, to the European Parliament.

It was intended to be an orderly transition with the phasing out of Russian crude oil within six months, and the production of refined products by 2022.

However, the EU's sixth package of sanctions has been met with resistance from Hungary.

Other landlocked countries like the Czech Republic and Slovakia have also requested more time because of their dependence on Russian oil. Bulgaria, which is already disconnected from Russian gas by Gazprom has also requested opt-outs.

The ultimate obstacle is Viktor Orban, Prime Minister of Hungary. He has compared an oil ban with dropping a nuclear bomb upon its economy. To the European Council, he wrote that he did not want to even discuss the matter next week.

Diplomats are frustrated, but they acknowledge that some countries might not be completely unhappy with the blockade of a decision due to rising energy prices.

More extreme nations have made it clear that Europe must stop giving Russia billions of dollars in what they consider "blood money".

There is also the feeling that Ursula von der Leyen may have mishandled things by announcing plans without doing the necessary groundwork.

However, she and the head European Council suggested this week that a deal on oil could be reached within days.

This was "absolutely crazy", one EU diplomat observed: "Charles Michel is setting up his own European Council for failure."

Leaders gathered in Brussels on Monday are leaving little time.

Although sanctions are not signed at the EU summits at ambassador level but at the EU Council, there were hopes that it might bring attention to the issue and force action.

In part, the extraordinary council was initially called because the June summit, which had been scheduled for June, felt far away in the middle of war on European soil. Diplomats say that the items on the agenda are mainly things that are already in motion and don't require a major meeting.

Officially, financial support for Ukraine, food safety, and other issues relating to the EU's energy transition are up for discussion.

BBC has seen draft conclusions that refer to the elimination of Russian fossil fuels, but gloss over the issue of oil sanctions.

1 Los Cucos, los Barbas, los Sheriff... pact of clans... 2 The great gun 'lobby' holds its annual meeting... 3 Sunflower planting increases by 50% in Castilla y... 4 The Board asks for "forgiveness" where Gallardo... 5 Those of legal age will be banned from the ‘light’... 6 Five million in 'peonadas' to lower surgical... 7 23 accused of drug trafficking acquitted after the... 8 Gunman's final 90 minutes fuel questions about... 9 China's FM Visits Kiribati, Where Fishing Grounds... 10 Russia condemns West's sanctions and seeks to... 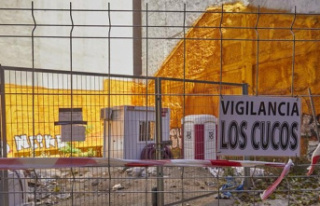