BRUSSELS, -- Wednesday's top European Union official exhorted 27 member countries to get off natural gas. This was to accelerate the transition to cleaner energy and make the bloc a stronger player in the global marketplace. BRUSSELS, -- Wednesday's top European Union official exhorted 27 member countries to get off natural gas. This was to accelerate the transition to cleaner energy and make the bloc a stronger player in the global marketplace.

Ursula von der Leyen, President of the European Commission, told legislators on the eve a summit focusing on energy crises that the bloc imports 90% of its natural gas -- most of it from Russia strategic rival -- "this makes them vulnerable."

She is asking for the EU to accelerate a transition to clean energy from sun and wind, which can be produced domestically and will eventually be much cheaper than imported fossil fuels.

The EU's most vulnerable families have been hit hard by the recent rise in gas prices. Von der Leyen called on all member states to ensure that taxes and energy levies are adjusted to protect the EU's poorest citizens.

Von der Leyen also emphasized the importance of strategic importance and a reduction in dependence on imports. One major player didn't upgrade its exports to the bloc in response to increased demand from Norway, a partner country.

"While Gazprom (Russia's Gazprom) has honored its long-term contracts with us, it didn't respond to higher demand as it did in past years. She stated that Europe today is also dependent on gas.

Therefore, it was not enough to transition to clean energy to be energy neutral by the middle of this century.

"The transition towards clean energy is vital not only for the planet. She said that it is crucial for our economy as well as for our resilience to shocks in energy prices.

This was a subtle reference to Viktor Orban (Hungarian Prime Minister), who specifically blames the rise in energy prices for the European Commission's Green Deal plans. The project will reduce greenhouse gas emissions by 55% by 2030, and make the bloc carbon neutral by 2050. 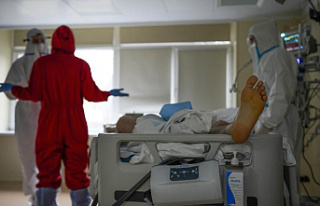 WHO: Europe the only region with rise in COVID-19...