China attempts to limit the economic impact of Shanghai's shutdown

Millions of people are lined up in Shanghai to get coronavirus testing. Authorities promise tax refunds to shopkeepers in the shut-down city and to keep the busiest port in the world operating to minimize disruption to trade and industry. 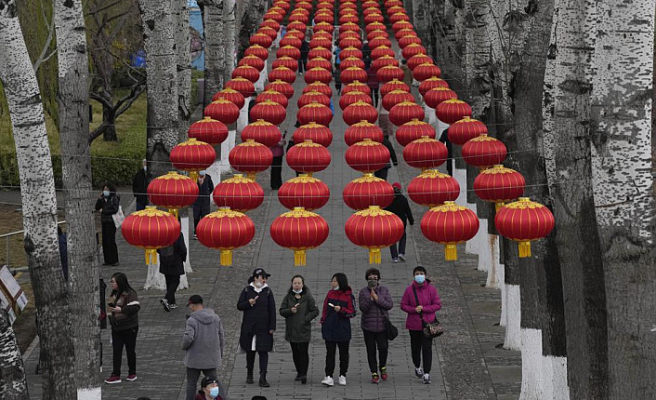 The global financial markets were already on edge regarding Russia’s war on Ukraine and higher U.S. rates. This week, the shutdown of all activity in China's largest city to contain viral outbreaks has jolted them.

The government reported 8,825 new infections in the country on Wednesday. This includes 7,196 cases in people without symptoms. This included 5987 cases in Shanghai. Only 329 had symptoms.

China's latest infection spike saw a decrease in cases compared to other countries. The ruling Communist Party has imposed a "zero tolerance” strategy to eliminate all infected people.

According to officials, virus testing had been performed on 9.1 million of Shanghai’s 26 million inhabitants by Wednesday. They stated that "preventive disinfection of apartment compounds, office building and shopping malls" would be done.

According to state media, Shanghai had more than 20,000 cases as of Monday's latest epidemic.

The party is working to refine its strategy in order to reduce job losses to the second-largest economy in the world.

State TV reported that the Shanghai port was open and that managers put in extra effort to make sure vessels could call "normally". The port is located in the Yangtze Delta, which hosts thousands of manufacturers of smartphones, auto parts, appliances, and other goods.

According to The Paper, operations at Shanghai's train stations and airports were as normal. The bus service to and from the city had been suspended previously. All visitors must submit a negative virus test.

Economists believe that developments that reduce demand in the largest consumer market in the world will have the greatest impact on China's Asian neighbours and the rest of the globe.

China is the largest export market of all its neighbours, Japan and South Korea.

A government campaign to reduce corporate debt and other issues unrelated to the pandemic caused economic growth to drop from 8.1% last year. Officially, the ruling party targets 5.5%. However, forecasters believe that even this is difficult to achieve and will require stimulus spending.

"China is the largest single consumer of almost everything." It is important outside China," stated Rob Carnell, chief Asia economist at ING. "If China's consumption drops by COVID, it will filter down the supply chain and impact countries in the region.

Louis Kuijs (chief Asia-Pacific economist at S&P Global Ratings) stated that officials are trying to defend China’s role in global manufacturing supply chains by making sure goods reach customers. He pointed out that factories were able to keep up with orders after previous shutdowns by working overtime.

Kuijs stated that the impact on supply chains was not as severe as some outside observers fear. These restrictions have a greater impact on China's spending than the demand side.

Carnell stated that Shanghai's impact should be "relatively mild" if it manages to contain its outbreak like the southern Shenzhen business center did earlier.

Shenzhen, a financial and tech center with 17.5 million inhabitants, had a similar citywide shut down in March. It reopened one week later.

Financial industry employees can work remotely, while automakers and large manufacturers may allow workers to live in closed loop systems that keep them away from the outside.

General Motors Co. and Volkswagen AG claimed that their factories in Shanghai were functioning normally. GM stated in an email that it was implementing "contingency plans globally" with suppliers to reduce the risk of COVID-related uncertainties.

In the northeast, there were 2,957 cases of new cases, including 1,032 without symptoms. The province has suspended access to Changchun-Jilin.

BMW Group announced March 24, that its Changchun factories had been closed due to an outbreak.

Daily Economic News reported that thousands of Shanghai stock traders and finance workers were staying in their offices to avoid any contact with outsiders. According to the newspaper, Shanghai Stock Exchange was operating normally with a smaller staff and a closed office.

At midday Wednesday, the benchmark Shanghai Composite index of China's stock market was up 1.3%. was also advanced in most other Asian markets .

The Bund riverfront, Shanghai's most renowned neighborhood, was also nearby. It was empty of the usual crowds and pedestrians.

Many restaurants could only accept orders via mobile phones and wait outside to receive their meals. Shopping mall visitors were required to wear masks, and register with a smartphone app.

If anti-disease restrictions at Shanghai port cause disruptions in industry and trade, this could pose a greater threat to trade and industry. It can handle the equivalent of 140,000 containers per day.

Carnell stated that "if the port was closed, there would have been even more dislocation." It's just another thing that we don't need.

A one-month slowdown in Yantian, Shenzhen's other major port, resulted in a backlog that numbered thousands of shipping containers. This caused shockwaves throughout global supply chains.

Although the shudders seen in financial markets may be an exaggerated knee jerk reaction that doesn't reflect "true reality", investors were already concerned about China and the global economic situation, according to Michael Every at Rabobank.

Every said, "We have a mountain of problems to worry over, and this foothill is only one among many." It's easy to find historical records and see how the COVID lockdown plays out if that's all there is. This interfaces with many other issues.