Professor: Inactive childhood can be difficult to reverse as an adult

Children who do not move, have a harder time to get started with exercise as adults, points out the professor. Although most children are moving too little in 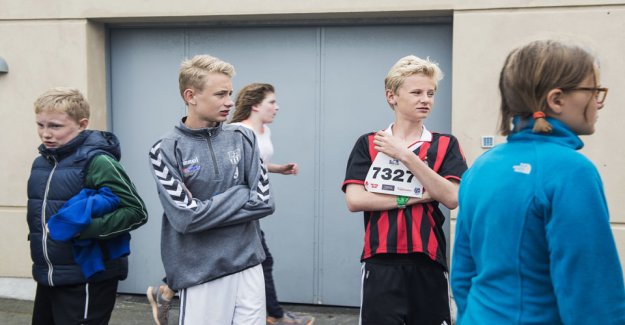 Children who do not move, have a harder time to get started with exercise as adults, points out the professor.

Although most children are moving too little in the daily, progress can still be reversed in the later teenage years or as an adult.

It just gets harder to accustom the body to exercise, if you have not been accustomed to it as a child.

so says Jens Troelsen, there is a professor at the Institute of Sports science and clinical Biomechanics, University of Southern denmark (SDU).

- the Race is not run, even if you have not been physically active as a child.

- We just know from the research that it is more difficult for adults today, who have not been active physically as well as young people, because you have not been accustomed to being out of breath, short of breath and to sweat, " says Jens Troelsen.

A new study from the world health Organization shows that 84,5% of Danish children between 11 and 15 years moving under an hour a day.

Jens Troelsen estimates that first and foremost should be put in while the children are still children.

- I fear that the large amount of children today are inactive, can be difficult to get started as adults.

- It is never too late to do anything, but we must do more, that the generation of upcoming adults will come in time with more physical activity like children, " says Jens Troelsen.

the Inactivity among children is also of concern in the Danish Regions, who operates the country's health services.

- It is worrying that so many young people do not move enough, because we know that physical and mental well-being hangs together, says Karin Friis Bach (R), who is chairman of the health committee in the Danish Regions.

- When you look at it from a public health point of view, it is worrying, because we know that it can lead to lifestyle-related diseases, when one moves a little, she says.

Jens Troelsen, UNIVERSITY of southern denmark believes that the responsibility is in a Bermuda triangle of parents, school and society.

- There are several who have to face together. We must as parents be aware that our children are not sitting for many hours in front of a screen, but the schools should also be more sure to get the movement going into teaching and frikvarterne.

- at the same time, society must provide for bike paths and playgrounds, which are not only for the smallest children under six years of age. There must also be places to hang out for the older children, where there is also a thought movement, he says.

1 LIVE: Follow the road and traffic conditions and get... 2 Lost his best friend: No one deserves it 3 Shelves DR program: we are in the need for 4 I would be fine with that my daughter got in internship... 5 B. T. think: No thanks to more parties 6 It is extremely, but usually 7 Playing FC Nordsjælland banks tame kronjyder 8 Josefine Høgh about his father's illness: 'I have... 9 Danish second-division player dreams about EM: Now... 10 Juventus coach keeps Ronaldo out of the important... LIVE: Follow the road and traffic conditions and get...