Cirkuselefanter reunited in a temporary home

Elephant Ramboline was the last, was missing, to complete the reunification of the four cirkuselefanter. Four highly publicized cirkuselefanter has been reuni 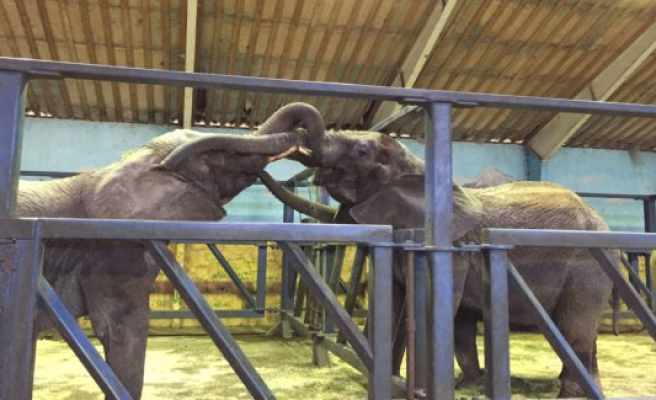 Elephant Ramboline was the last, was missing, to complete the reunification of the four cirkuselefanter.

Four highly publicized cirkuselefanter has been reunited in a temporary housing facilities in Slagelse.

The 36-year-old elephant Ramboline was the last in the row, who arrived in a custom-designed truck Monday.

Ramboline had made the trip across the great belt from its old home at the Circus Trapeze in south Jutland to the Circus Arenas vinterstald in Slagelse in order to be united with its upcoming pensionistfæller Djungla, Lara and Jenny.

Ramboline have been waiting to be brought together with its counterparts since the spring of 2018, when the then government signed an agreement with the Social democrats and the Danish people's Party about a total ban on wild animals in the circus.

- We are very pleased to see that the elephants have now finally assembled. Although we all the time have been assured that the commissioning of the Ramboline would go well, it is a great relief to see how nicely the three other elephants have taken against her, says Britta Riis, director of Animal Protection.

According to the plan the four cirkuselefanter to Knuthenborg safari park, when a new elefantanlæg is ready for them about a half a year.

in Order to ensure that tilvænningen precursor optimally for all four elephants, is Ramboline in the first place been assigned its own area in the temporary vinterstald.

- It is important that the elephants get a good relationship to each other, as they must spend the rest of their days together in the Knuthenborg safari park.

- Therefore, be introduced slowly to each other over the coming time. The most important step is today over, and we are very pleased that the first meeting went well, says Rasmus Nielsen, chefzoolog in Knuthenborg safari park.

It was in October that the Danish minister Mogens Jensen (S) could reveal that the four cirkuselefanters journey ends in Knuthenborg, after a formal tender procedure.

the Elephants waiting temporarily in Slagelse, until their new home, which is going to be Europe's largest elefantanlæg, is expected to stand ready in Knuthenborg safari park during the summer of 2020.

1 Wealthy minority will give half a billion to the new... 2 Naples, the coach will send players on training camp... 3 Football star accused of sexual assault: Now must... 4 10-year-old girl exposed bare in the pool 5 One of Scandinavia's largest providers raises prices:... 6 Danish håndboldlegende sets career this summer 7 Peter Nygaard: 'How could it go so wrong?' 8 Football FM-the panel is not in doubt: that is Why... 9 The storm over prince Andrew continues: took advantage... 10 Superliga club presents deficit of over six million Wealthy minority will give half a billion to the new...