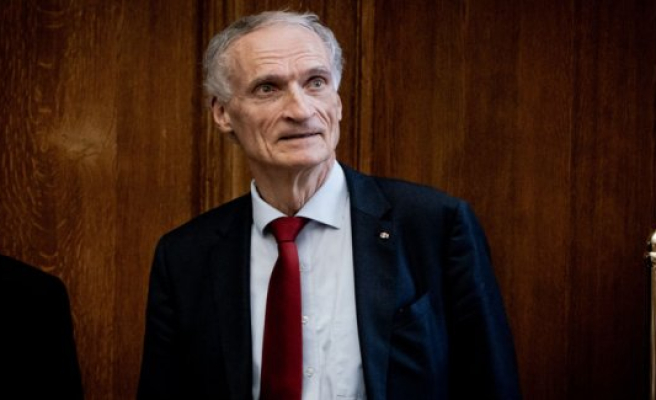 Former minister Bertel Haarder (V) has been appointed chairman of The Royal Theatre.

Acting minister of culture, Rasmus Prehn (S) has appointed Bertel Haarder (V) as the new chairman of the board of The Royal Theatre. It informs the ministry of Culture.

There Was replaces by the turn of the year Lisbeth Knudsen, who sits on the post since 2016.

- We have gone for one that truly has both a political and a cultural experience. And which has a high robustness.

- at the same time represents Bertel Haarder on any Build spirit, when it comes to the desire to build a bridge between the highbrow and the popular. It is in the much need, says Rasmus Prehn.

He says further, that he sees it as essential that there is cooperation across the middle of Danish politics, when it comes to The Royal Theatre.

Bertel Haarder, the church - and the culture minister from 2015 to 2016. He has throughout his decades-long political career been very involved in the cultural life. His wife was for several years leader of ballet læseskole.

- theatrical experiences is an important part of my life, and I have no higher wish than to even more young people and old people have to get access to and experiences at the three major scenes.

- I will lay me in the belt, to The Royal Theatre in even higher degree the whole of the Danish theatre, writes mr Bertel Haarder.

He also writes that he welcomes the fact that the come to after that omprioriteringsbidraget - forced annual savings introduced by the former civil government in 2015 - has ended.

It was Bertel Haarder himself, who as minister of culture, the supervisory board established with Lisbeth Knudsen in the lead.

minister of Culture, Rasmus Prehn has chosen to replace the entire board with the exception of the employee representatives and so Anders Hjulmand from advokathuset HjulmandKaptain.

New in the board of directors include, among others, president of 3F, Per Christensen, and Kitte Wagering, theater manager for the Malmö city theatre.

Since There Was in his time chose to replace as well as the entire board of directors sparked the criticism from the Social democrats, who at the time was in opposition.

- There is no doubt that it is always a delicate balance to ensure both the continuity and on the other hand, to put his own, new course.

- Here there is also talk of an executive board, who have the desire to reach out across other and new target groups. Therefore, we feel that we have found a good balance with the new, strong members, says Rasmus Prehn.

1 What in the world said Trump, right? Know more about... 2 Do you have it in your hand, when you dance around... 3 NFL-profile of expelled: Gave the opponent a fist... 4 Ferrari extends with the young Formula 1-comet 5 Swedish club gets to keep group have won ... -license 6 Saudi Arabia condemns five to death for the killing... 7 Algeria's powerful military chief reported dead 8 Customers deluged with feces and sewage in the shopping... 9 Venice sailing on the new in seawater 10 Lazio heroes hailed from broken Ronaldo-shoal What in the world said Trump, right? Know more about...