Ximo Puig, against Ayuso and against Belarra: "There is even intelligent life outside of Madrid"

The president of the Generalitat Valenciana, Ximo Puig, has asked the Government on Monday to support Imserso's travel program for the elderly and demand improvements in wages in the sector through collective bargaining. 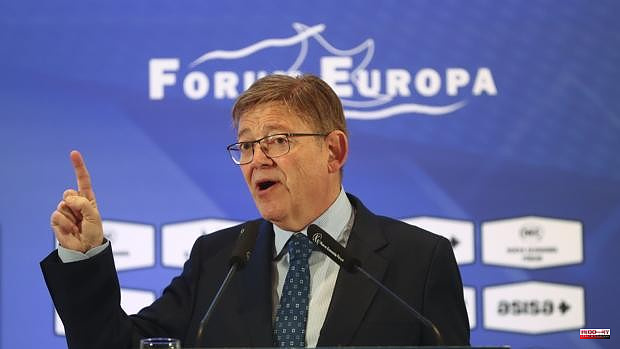 The president of the Generalitat Valenciana, Ximo Puig, has asked the Government on Monday to support Imserso's travel program for the elderly and demand improvements in wages in the sector through collective bargaining. "You have to pay for public services what they are worth," he stressed.

"It is not possible to pay a full Imserso pension at 20 or 21 euros and at the same time ask for salary income to be improved," he stated in his speech at an informative breakfast at Forum Europe, which was attended as guests by former president José Luis Rodríguez Zapatero and the ministers Diana Morant (Science), Luis Planas (Agriculture) and José Luis Escrivá (Inclusion).

Puig has made this request a few days after the announcement by the Minister of Social Rights, Ione Belarra, of the extension of this vacation program for the elderly without an upward revision of prices, something that motivated the hotel management Hosbec to demand his resignation .

In this regard, the also leader of the PSPV has defended that "the Government has to give clear signs that what they are worth must be paid for public services" and, from there, "demand through agreements and collective bargaining that the work is remunerated accordingly. "We cannot say one thing and the opposite", he has illustrated.

A few weeks before the start of the summer season, he has predicted that that of 2022 may be higher than that of 2019 in the Community, "without wanting to throw bells on the fly", if the predictions are confirmed. "We are very hopeful," he said, highlighting the improvement of the hotel plant and products other than sun and beach during the pandemic.

Apart from tourism, Puig has advocated "useful policy in all sectors" that are key to the Valencian Community, such as agriculture, and has thanked the minister of the branch, Luis Planas, for his work so that the European Union finally approved the treatment cold for citrus imports.

In labor matters, he has called for an alliance for employment in Spain to protect the rights of workers: "The ambition should be a society without the invisible; change the now-forgotten occasional applause for the essential ones."

On the other hand, the Valencian president has demanded a "firm and without sterile wars" dialogue that allows new regional agreements on water to be achieved for the irrigators of all the basins, with "water forever and at an affordable price" in the Segura.

He has also claimed "country agreements" to accelerate infrastructures such as the Mediterranean Corridor that "benefit Spain as a whole", through the execution of the investments foreseen in the General State Budgets (PGE) "changing everything that has to be changed".

Puig has presented this Monday in Madrid the celebration of a full month of activities of the Valencian Community in the capital region, rejecting that there is a "crusade" against the president of the Madrid Executive, Isabel Díaz Ayuso, but has insisted on his idea of ​​decentralization of some headquarters of public organisms.

"There is even intelligent life outside of Madrid," Puig quipped during his speech at a New Economy Forum breakfast to reaffirm his approach to decentralize some state offices, assuring that he would like this proposal to be "taken into consideration."

In this context, the Valencian president has given decentralization in Europe as an example, with headquarters of organizations in several European cities, to vindicate his idea of ​​relocation within Spain. "It is an approach of trying to reinforce, to federate is to unite", he has insisted.

Given the criticism that this approach has caused by the Community of Madrid, Puig has rejected that this idea is "a crusade against anyone", but has defended that he makes this proposal "for equality".

In any case, Puig has stressed that, from his point of view, the Community chaired by Isabel Díaz Ayuso practices "fiscal dumping" that affects the rest of the regions, although he has insisted that the relationship with the Community of Madrid is good. and it is a "historical relationship".

For this reason, he has revealed that he has sent a letter to Ayuso to invite her to any activity in which he wishes to participate this month of the Valencian Community in Madrid, although he has asked that "there be elements that do not contribute to increasing inequality".

1 The province of Salamanca demands an “equal” railway... 2 A baby is abandoned within minutes of being born on... 3 “The best handball campus in Spain” arrives with... 4 How many votes does it take to remove Johnson? Keys... 5 Who could replace Boris Johnson if he doesn't... 6 Laso gets scared: "It's been a tough blow,... 7 Criticism of Risto Mejide for a photo in which he... 8 The Olmedo Classical Theater Festival honors Moliere... 9 Urda still does not recover social services suspended... 10 Siro fulfills the order and does not start the activity... 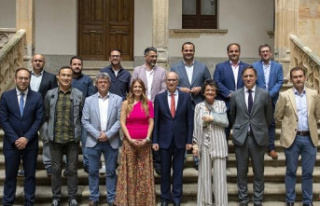 The province of Salamanca demands an “equal” railway...