Women conquer the waters of the Abra

The best female crews are, for the third consecutive year, protagonists in the waters of the Abra. 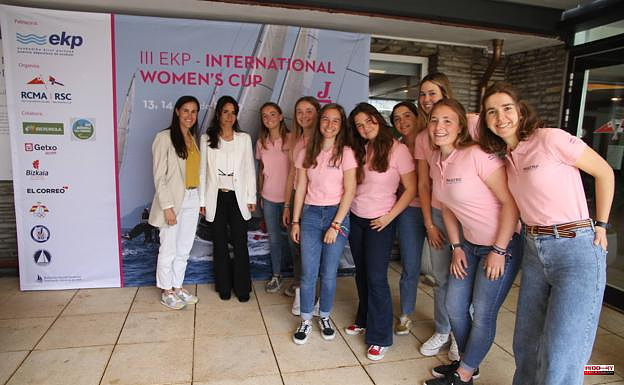 The best female crews are, for the third consecutive year, protagonists in the waters of the Abra. The Real Club Marítimo del Abra-Real Sporting Club organizes this weekend the 'III EKP International Women's Sailing Cup' in the thriving J80 class, which takes place in the beautiful regatta course of the Biscayan waters of Abra. The test, sponsored by Euskadiko Kirol Portuak, is one of the great tests of the season in two days with 15 boats from the J80 division made up entirely of women. “We have come a long way in our sport of sailing. For example, there are more and more girls in our José Luis de Ugarte Sailing School. What can be seen is that there is a long way to go in the future. I encourage the girls to try this beautiful and special sport that gives us visibility", highlights Carmen Galdós, member of the Board of the R.C.M.A.-R.S.C., who forever has the honor with her crew of being the winner of the first tour of this women's championship at the premiere in 2020.

The participation of women's boats from different parts of Spain is planned, among which are the local crews of the Fhimasa Escuela de Vela José Luis de Ugarte of Joana Abásolo, the Surne Women's Team of Carmen Arbaiza or the Pakea Getxo Bela. Although the favorites, one more year, are the winners of the two editions held: the Dorsia Covirán Sailing Team of Ana Pujol (Marina Burriananova) -with the Olympic medalist Natalia Via-Dufresne-. These will have as their main rivals, initially, the girls from Olatz Muñoz's Decoexsa, runners-up and third in 2020 and 2021, respectively, in addition to being the current world champions in Denmark. José Azqueta, commodore of the R.C.M.A.-R.S.C., was runner-up there. During the presentation of the event, he said that “for us it is a privilege to also be the first event of the Liga Iberdrola Femenina.

Since the first edition of this EKP International Women's Sailing Cup we have tried to raise awareness and support women's sport. Even after that start, there were girls who told us that they had returned to sports practice. The young women of our Sailing School also have the opportunity to compete with leading sailors such as Olympic medalists such as Natalia Via-Dufresme. We have to sow and then harvest and this test is another step forward. There are fifteen registered teams and the committees are also chaired by women, who are given prominence within the technical area».

One of the girls who recovered the sport was the Gipuzkoan Olatz Muñoz, for whom «it is a satisfaction to return to this event, which means another big step in the purpose of promoting and contributing to equality. This test will allow the presence of the woman in the candle to be made visible. Until recently there were not many women who sailed and there are more and more of us. I myself returned to compete thanks to these initiatives. All those who have doubts to try sailing in this J80 class. Those who do it repeat ».

Also registered are the Zero Stress teams, from Hondarribia; the Biobizz of María Sánchez, from Santander; the female crew of the Real Club de Regatas de Alicante; that of the Monte Real Club de Yates de Baiona; Simona Manfredini's Code Zero from Lanzarote; or the AGD of Helena Alegre (Palma de Mallorca).

Getxo is once again the capital of women's sailing this weekend. Six races are planned to be completed in a unique event that also features women-led organizing staff on land and at sea. In addition, this test is part of the Iberdrola Women's Sailing League promoted by the Royal Spanish Sailing Federation, the Real Club Marítimo del Abra-Real Sporting Club, the Real Club Náutico de Palma and the Monte Real Club de Yates de Baiona with the collaboration of the regional federations hosting the regattas. The first of the tests is this III EKP International Women's Sailing Cup, which will be followed by the Tabarca Vela Diputación de Alicante, which will be organized by the R.C.R. Alicante on July 8 and 9. The J80 women's fleet will meet again during the Copa del Rey Mapfre, from August 1 to 6, at the R.C.N. Palma and, once again, the season and the League will be closed by the Monte Real Club de Yates de Baiona from October 7 to 9, revealing the winning team.

Also, in the program of the 'III International Women's Sailing Cup' you can see in El Saltillo of the organizing Club, like last year, an 'Exhibition of photographs of women in sailing' (-Portraits of Salt- by Juan Felix Ruiz Nunez). The project is a look that shows the less recognized side of women: physical effort and competition.

“We are more than happy to continue with this relevant test. In previous editions we have had a very interesting participation that is repeated in this year 2022. Our Club is going to be a women's sailing party with a quality and always exciting competition, in a class that is increasingly more accepted and in the that quite a few girls sail this weekend as you can see", details Manu Sendagorta, president of the R.C.M.A.-R.S.C.

1 Betic Joaquín congratulates 'Juanpe' López,... 2 Traded expensively on Ebay: Barbie Queen sold out... 3 The Euskaltel cyclist Gotzon Martín recovers from... 4 The Grizzlies destroy the Warriors in their first... 5 Larkin, James, Vezenkov, Mirotic and Tavares, the... 6 London finalizes unilateral measures against the Brexit... 7 War Ukraine - Russia, live: latest on the invasion,... 8 NATO is considering deploying troops in Sweden and... 9 Bastianini masterfully wins Le Mans after Bagnaia... 10 Barça will have two teams in the Copa América in... 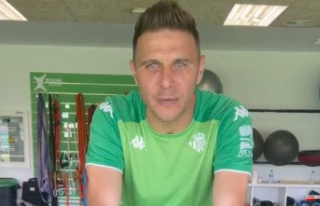