The year 2022 ended with the warmest New Year's Eve in Germany since weather records began in the 19th century. The year 2022 ended with the warmest New Year's Eve in Germany since weather records began in the 19th century. While people nationwide were still waiting for the new year, it has already begun in large parts of the world.

This time the island state of Kiribati started things off, followed by Samoa, New Zealand and Australia, South Korea and Japan, the Philippines and Singapore and other countries.

In China, where according to the traditional lunar calendar the new year does not begin until January 22nd, this year's New Year's Eve is overshadowed by the great corona wave in the country. Bars and restaurants have been allowed to hold parties as authorities have relaxed their strict anti-virus measures, but many have stayed at home due to illness or fear of catching the virus.

The virus is spreading at breakneck speed after the end of the zero-Covid policy in early December. It is estimated that hundreds of millions have been infected. Hospitals are overcrowded.

In large parts of Germany, the meteorologists still expected double-digit temperature values ​​on New Year's Eve. It should also be very windy, especially in the northwest. In the Netherlands, a number of fireworks shows were canceled due to stormy weather, for example in Amsterdam, The Hague, Apeldoorn and Hilversum.

The German Weather Service (DWD) measured record values ​​for December 31 on New Year's Eve. In Wielenbach in the Upper Bavarian district of Weilheim-Schongau, 20.8 degrees were determined around 2 p.m. and 20 degrees in Munich. In Baden-Württemberg, 20.3 degrees were measured in Müllheim near Freiburg and in Ohlsbach.

According to the DWD, the previously highest temperature on New Year's Eve was 17.0 degrees in 1961 in Müllheim. In 2021 it was 16.9 degrees warm in Freiburg im Breisgau.

In Switzerland, too, it was warmer in many places on New Year's Eve than it had been on that day since regular measurements began. In Delsberg (French Delémont) in the canton of Jura, 20.9 degrees were measured.

DJ Bobo at the Brandenburg Gate

In Berlin there is again a party with an audience at the Brandenburg Gate. The celebration, which will be broadcast on ZDF and should feature performances by the Scorpions and DJ Bobo, will take place on the east side of the gate. Before Corona, tens of thousands often celebrated the turn of the year on the west side - between the gate and the victory column - which was described as the largest New Year's Eve party in Germany.

The residents of the South Sea island of Kiritimati were the first in the world to start the new year on Saturday at 11 a.m. German time. The 388 square kilometer coral island has only a few thousand inhabitants. Samoa, which abolished daylight saving time in 2022, followed for the first time an hour later - at the same time as New Zealand and Tonga.

Two hours later, at 2 p.m. German time, the traditional giant fireworks were ignited in Sydney, Australia, to mark the turn of the year. About a million people came to see the light show in front of the Harbor Bridge and the Opera House. As early as 9 p.m. local time, the first fireworks lit up the sky as a family event.

Unlike in the past two years, there was no longer a ban on the sale of fireworks in Germany before New Year's Eve. Therefore, many more emergencies were expected again. There were a few incidents involving fireworks before the night.

In Teupitz, Brandenburg, two men (24 and 51) were injured in an explosion in the basement of a residential building on New Year's Eve. According to police, a fire broke out in the house. The "Märkische Allgemeine" reported first. According to initial findings, the police assume that pyrotechnics had been used. In Berlin's Schöneberg district, young people threw firecrackers on the street and at police officers on Friday evening. Five people involved were temporarily arrested, the police said.

In Frankfurt/Main, a New Year's Eve rocket ignited in front of a high-rise building set fire to a balcony on the sixth floor and the apartment belonging to it. A woman suffered smoke inhalation. In Rhineland-Palatinate, a firecracker was thrown at an eleven-year-old boy in Ellerstadt on Friday and he suffered burns on his chest. In Wörth am Rhein, a child stuck a burning firecracker in the shirt of an eleven-year-old, causing burns to him too.

In the Black Forest town of Schonach (Baden-Württemberg), a father was seriously injured after his 23-year-old son's home-made firecracker detonated in his own basement.

The sale of fireworks had been banned for the past two years to relieve hospitals of additional patients during the pandemic period. 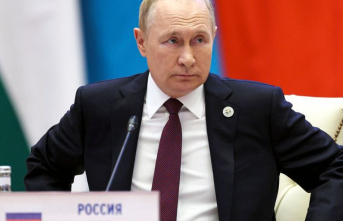