Waiting for the National Assembly of Ecuador to resume the debate today to decide the future of the country's president, Guillermo Lasso, the president decided to take the initiative and announced late on Sunday the reduction in fuel prices, one of the main triggers of the protests and massive strikes against the Government led, above all, by the indigenous movement. 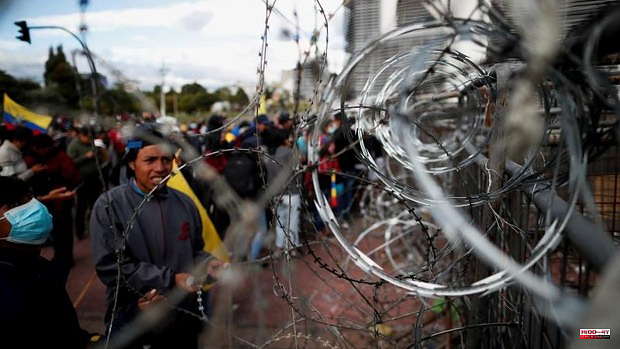 Waiting for the National Assembly of Ecuador to resume the debate today to decide the future of the country's president, Guillermo Lasso, the president decided to take the initiative and announced late on Sunday the reduction in fuel prices, one of the main triggers of the protests and massive strikes against the Government led, above all, by the indigenous movement. Demonstrations that have had their reverse in others of the opposite sign, causing serious street clashes that have left a balance of four dead and two hundred injured. On the second day of the debate, which lasted seven hours and was carried out electronically, there were parliamentarians who denounced pressure and threats to vote for the removal of the president. The time difference will mean that the decision will probably not be known until tomorrow in Spain.

The president said that he had assumed all the points on the agenda of the indigenous movements –freezing fuel prices, moratorium on banking debts, fair prices, improvement in collective rights, health and education, cessation of violence– and that its leaders have decided that Ecuador must return to normality. “Our country has been the victim of barbaric acts. None of these acts will go unpunished," he added.

In Sunday's parliamentary session there were complaints from pro-government legislators from CREO (Movement Creating Opportunities, Lasso's liberal-conservative party) and from the Democratic Left about pressure they receive through phone calls, visits and demonstrations in front of their homes so that they support the impeachment of the president. Specifically, legislator Patricio Cervantes told the plenary session that minutes before his intervention, a group of individuals from the Caranqui people went to his house, in the city of Ibarra, with banners and shouts in order to pressure him. "It is important that the country knows how pressure is being exerted to twist the will of the assembly members," Cervantes said. "But we will not allow a coup by a group of mafias allied to drug trafficking and narco-terrorism who want to destroy order."

CREO parliamentarians focus this campaign on former president Rafael Correa (currently a political refugee in Belgium) and other leaders of left-wing populism in South America, such as Bolivian Evo Morales, who has indicated on social media that in Ecuador they are massacring the indigenous population. The votes of 92 lawmakers are needed to remove Lasso; for now it is speculated with a sum that does not reach 80, although the purchase of wills is not ruled out.

Demonstrations in Ecuador protesting the high cost of living have so far caused economic losses of 475 million euros (500 million dollars), according to the Ecuadorian Minister of Production, Foreign Trade, Investments and Fisheries, Julio José Prado, as reported by 'El Comercio'. Among the most affected sectors is clothing and footwear, with a drop in sales of 75%. For the tourism sector, the first 12 days of the shutdown have meant a loss of approximately 48 million euros ($50 million). The minister stated that 1,094 oil wells remain closed, representing a loss for Ecuador of 91 million euros (96 million dollars).

The president of the Confederation of Indigenous Nationalities of Ecuador (CONAIE), Leonidas Iza, announced over the weekend that the mobilization was being maintained in Quito due to the lack of agreement with the president of the Assembly, Virgilio Saquicela, and the government ministers, although government sources reported that the country has changed the public order alert from red to yellow. In this sense, the Minister of Education, María Brown, announced that some educational centers will be able to return to face-to-face classes. In certain communities the decision will depend on the local authorities.

1 La Honda, a torture rack: falls and burns on feet... 2 Andrew Lloyd Webber, the King Midas of international... 3 Antonio Banderas, from a friend's sofa to Broadway 4 At least 46 immigrants found dead in an abandoned... 5 The Board promotes the sale of 247,000 square meters... 6 The Copernicus service reduces the calcined hectares... 7 Three trucks leave from Spain with aid for the museums... 8 Contemporary airs for traditional music 9 What pensions rise with the new government measures... 10 At what time do the cuts occur on the A-2 for the... 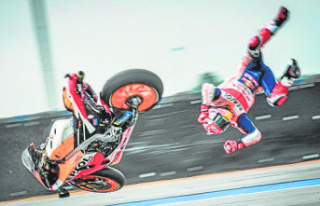