The President of the European Commission, Ursula von der Leyen, has asked this Wednesday to "maintain the momentum" in terms of military spending, after the intention expressed by the Member States to spend more on Defense in the face of the war in Ukraine, as well as to invest more in a coordinated way, encouraging joint purchases.

"We must maintain the momentum. We must ensure that the money is spent in a coordinated manner and that it addresses our gaps," said the German conservative in a statement on the initiative presented by the Community Executive this Wednesday to promote joint purchases in Defense.

For Brussels, the war in Ukraine has revealed "the effects of years of insufficient defense spending" and after "a lost decade" in military investments, Von der Leyen has asked to consolidate the new trend.

"We ask to increase joint purchases because it is better operationally for the Armed Forces, financially and industrially. And it strengthens our extensive network of innovative SMEs", defended the president of the Commission, advancing that her Executive will present an instrument to carry out joint purchases, which which, together with the exemption from paying VAT, will seek to raise the level of joint military purchases and investments, which has fallen in recent years.

At the heart of the matter is that joint military purchases and investments have been declining since 2016 and far from the goal of spending 35 percent jointly. Brussels estimates that in 2020 only 11 percent of defense spending was channeled into joint projects.

The analysis of the European Commission is that, despite having a competitive defense sector, there are gaps and there is a problem of fragmentation. Regarding military resources, Brussels sets as priorities for the EU to replenish material reserves, replace defensive systems from the Soviet era and reinforce air and missile defense systems.

For this, the Community Executive proposes a new instrument endowed with 500 million to encourage joint purchases. The conditions for using it are that the purchase includes at least three Member States and the acquisitions contribute to strengthening defense capabilities and European industry.

These funds come from the European budget, community sources have reported, emphasizing that they comply with the treaties, cited as an obstacle to investing common funds in military spending.

The idea is that Member States not only increase military spending, but also invest better and more efficiently to close the gaps that exist in European Defense. The European Executive seeks, through more joint purchases, to avoid fragmentation and duplication between Member States in terms of Defense.

Brussels intends to immediately adopt this initiative to help member states fill the most urgent gaps in a collaborative way. Community sources point to its use to fill the reserves of military material, such as ammunition, after the important shipments made to Ukraine to repel Russian aggression.

With this instrument and the establishment of a working group to coordinate joint purchases, the Commission wants to offer short-term initiatives with the idea of ​​establishing a permanent framework later in 2022, in such a way that this way of spending on Defense is consolidated .

These proposals follow the line set by the leaders of the Twenty-seven who, at the summit held in Versailles, a few weeks after the Russian invasion, agreed to "substantially" increase military spending to face the new security reality with the war in Eastern Europe.

The reaction of the European Union to the crisis in Ukraine has "consecrated the birth of European defense", as the President of the Council, Charles Michel, proclaimed at the time, but with the need to identify areas of action and investment to promote its development.

In the community capital they calculate that the EU countries have increased military spending by 20 percent since 1999, a figure that pales in comparison with the investment of the United States, which spent 66 percent more in this period or Russia, 292 percent, and China, 592 percent. 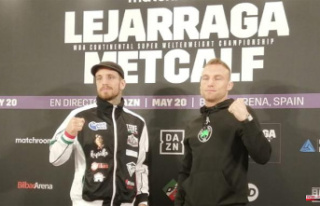 'Miguelón' already has his cervical spine