Unamuno returns to "walk through Salamanca" through the shooting notebook 'While the war lasts', by Miguel Elías

The film 'While the war lasts' by Alejandro Amenábar, shot in Salamanca in 2018, was portrayed under the brush of the artist Miguel Elías in a notebook named after the title of the film. 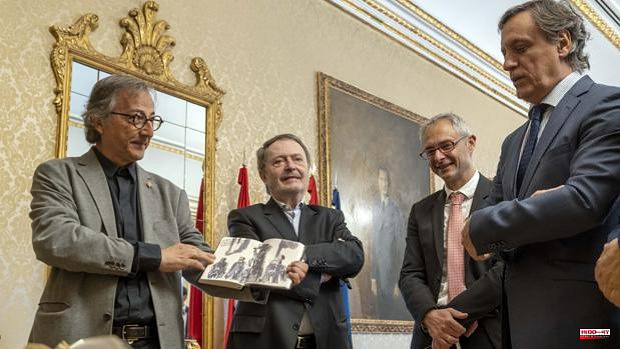 The film 'While the war lasts' by Alejandro Amenábar, shot in Salamanca in 2018, was portrayed under the brush of the artist Miguel Elías in a notebook named after the title of the film. Its author has presented this Monday at the City Council of Salamanca the work in which he collects, both visually and verbally, all the aspects discovered during the filming of the film. Elías has described it as a "method of knowledge and self-knowledge" in which Miguel de Unamuno "walks around Salamanca again, on this occasion, as a notebook."

Conveying the idea that "disseminating is nothing more than knowing, although at the university and in scientific articles it still costs", Miguel Elías has reflected, in addition to the entrails of a filming, a reflection on Unamuno.

Among its pages parade intellectual, university, political and military figures, and even simple people, accompanied by the texts of Luis Miguel Santos de Unamuno and the university professors Manuel Carlos Palomeque and the poet Alfredo Pérez Alencart.

Between the walls of the Salamanca Consistory, where a portrait of Unamuno donated by Miguel Elías rests, the first mayor, Carlos García Carbayo, has been "proud" of having a painting "that is in charge of receiving all the people" who enter in the city Hall. Likewise, he has highlighted that this artist's notebook "will remain as part of the history of the city and of cinema."

For his part, the rector of the University of Salamanca, Ricardo Rivero, participated in the presentation ceremony, highlighting that "every person who carries this notebook in their hand will remember a historical moment." Thus, he has valued the work, which contributes to the recreation of the story "in a city like Salamanca, which is about art, not just knowledge," reports Ical.

Miguel Elías, artist and professor of Fine Arts at Usal, participated in the filming of 'While the war lasts' by chance. Recruited in the casting where he accompanied his daughter, the one who was really interested in participating in the film, he ended up being in charge of playing the role of Captain Barros, who opens the Amenábar film. Thus, knowing the ins and outs of a filming set, being an "intruder", as he defined himself, he began to collect from the first costume tests, parts of the script or expressions such as Unamuno's significant phrase "Long live death. In other words, death to life”, even portraits, photographs, concerts or visits.

Published by the Salamanca City of Culture and Knowledge Foundation, in collaboration with the University of Salamanca, the original filming log will remain in the Casa Museo Unamuno as one more piece of the exhibition, so that, in the author's words, "the city does not never forget." In addition, 500 copies have been published at a price of 12 euros, this Tuesday, May 24, the presentation to the general public will take place in the Hall of the Word of the Liceo Theater.

1 The bear cub found in Igüeña (León) responds positively... 2 Santiago Abascal considers settled the "first... 3 Health confirms monkeypox in Gran Canaria and studies... 4 Robles visits the Spanish fighters in Lithuania that... 5 Junts accuses the PDECat of wanting to block their... 6 Sexual violence against women, a throwing weapon in... 7 They investigate a new group rape of a woman with... 8 Young rental bonus: when can it be requested according... 9 Two sisters from Tarrasa in Pakistan are tortured... 10 The Generalitat Valenciana allocates 50 million euros... 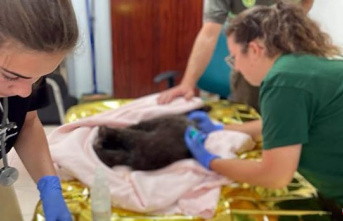