UN ends trip to China with 'concern' about Xinjiang

In front of the blue flag of the United Nations and a mural of traditional Chinese art, Michelle Bachelet offered a digital press conference this afternoon to conclude her official trip to China, the first of the High Commissioner for Human Rights in seventeen years; a mission as historic as it is controversial and, apparently, sterile. 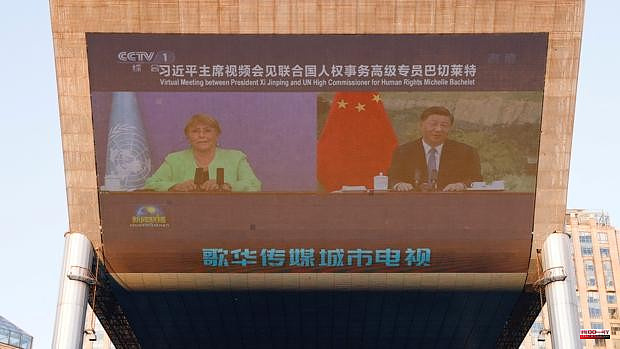 In front of the blue flag of the United Nations and a mural of traditional Chinese art, Michelle Bachelet offered a digital press conference this afternoon to conclude her official trip to China, the first of the High Commissioner for Human Rights in seventeen years; a mission as historic as it is controversial and, apparently, sterile.

A "visit", that "not an investigation", motivated by the repression carried out by the Chinese Communist Party in the province of Xinjiang against local ethnic groups such as the Uyghurs, a campaign that foreign governments and NGOs describe as genocide. The former Chilean president has highlighted the difference at the beginning of her intervention, since "the official visit of a High Commissioner is by nature high-profile and simply not suitable for the type of detailed, methodical and discreet work" that an investigation requires.

Bachelet, on the other hand, has described her time in China as "an opportunity to hold direct conversations with its main political leaders on human rights, to listen to each other, raise concerns and lay the groundwork for more frequent and meaningful interactions in the future." .

The High Commissioner has dedicated two of her six days of stay to Urumqi and Kashgar, the two largest cities in Xinjiang. She there she has inspected, "among other places", "the Kashgar jail and the Kashgar Experimental School, a former Vocational Education and Training Center (VETC)". The Chinese authorities use this last term to refer to the re-education camps through which more than a million people have passed, according to data from the Administration itself. At first, they denied their existence, to later characterize them as centers for professional training and voluntary participation, part of an anti-terrorist policy against Islamic extremism.

"In Xinjiang I have raised our doubts and concerns about the widespread application of counterterrorism and deradicalization measures, in particular their impact on the rights of Uyghurs and other predominantly Muslim minorities," Bachelet pointed out. «I am unable to assess its full scale (...). The Government has assured us that the VETC system has been dismantled.”

The High Commissioner has also claimed to have mentioned particular cases of "Uyghurs living abroad who have lost contact with their loved ones" in Xinjiang, a "priority issue". Among them are many victims of the camps, such as Qelbinur Sidiq, a Uyghur woman exiled in the Netherlands after being forced to work in two of these centers and then subjected to forced sterilization, who this week revealed her story on ABC.

The High Commissioner has traveled through China isolated in a "bubble" due to the security measures motivated by the pandemic, a circumstance that has increased the skepticism of the international community about the authenticity of scenarios and interactions. Bachelet, however, has guaranteed that all of his meetings "have been organized by our team independently and carried out without supervision" from the authorities.

Sources from the diplomatic community in Beijing have revealed to ABC the widespread concern about the possibility that the visit was manipulated by the regime. Others have mentioned the precedent of her trip to Venezuela in 2019 as an example that the High Commissioner could be more critical once she had concluded her visit to the country. The definitive answer lies in the report that the body has been preparing for years and whose publication has been withheld for months, although Bachelet has indicated today that her stay is not linked to the content of the document.

Thus concludes a controversial mission in the face of conflicting pressures in which, above all, the institutional credibility of the organization and the personal credibility of its High Commissioner were at stake. Proof of this is the "correction" that his team made public this week, after official Chinese media praised him for "China's achievements in human rights" during his digital meeting with leader Xi Jinping . Today, the state television CCTV has started the question time requesting an evaluation on "the situation of human rights in the United States", to which Bachelet has granted an extensive response.

“The High Commissioner has stated that it is not an investigation, which is not entirely true. Any visit carries out little primary research, its function is different, to channel the perspectives and information provided by others, ”explained Philip Alston, professor of law at New York University, during a meeting with journalists. This academic, who has made several trips to China as a United Nations Special Rapporteur, considers Bachelet's stay as positive news, since he demonstrates that “the UN plays a role in relation to all countries. Also that China recognizes the principle of accountability. At the same time, it puts the situation in Xinjiang in the spotlight, and that's very important."

An optimistic vision that is not shared by those NGOs that from exile defend the rights of the persecuted ethnic group, such as the World Uyghur Congress, a platform that brings together many of them and that the Chinese Government considers a "terrorist organization." “The Communist Party is going to choreograph the entire visit, which will be used as a propaganda tool. Raised in those terms, it is bad news that can cause more damage, ”criticized its spokesperson, Zumretay Arkin, in an interview granted this week to ABC. Bachelet has already left China but the international community hopes that, even with another fund, he has not yet said the last word about it.

1 Karine Jean-Pierre, Joe Biden's spokesperson... 2 Texas shooting: Police accuse of waiting too long... 3 Africa. Nigeria: At least 31 people are killed in... 4 MotoGP: MotoGP's Italians are on the frontline... 5 The UN should abolish the right to veto in Ukraine... 6 Pau: A 75-year-old cyclist was killed in a car accident... 7 Mañueco recognizes the Armed Forces for their "priceless"... 8 Cestas: This "Pretty Month of Europe", has... 9 The Sunday story. Marriage or Death: Vincenza's... 10 The fall will see negotiations on reforming pensions... 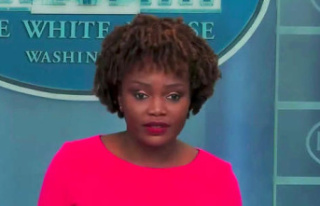