Transport and fishing, again against the ropes

A little more than three months after the strike of transporters and fishermen that paralyzed the Galician economy, both sectors are still suffocated. 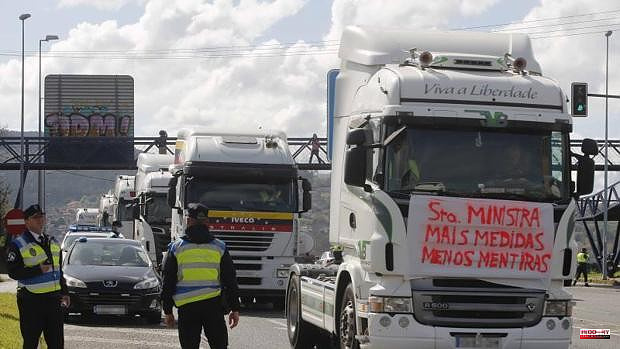 A little more than three months after the strike of transporters and fishermen that paralyzed the Galician economy, both sectors are still suffocated. Government measures, such as the 20-cent discount on fuel, have been practically without effect given the latest fuel increases. In the short term, going back on strike as a protest measure is ruled out, but the situation is critical. They demand greater discounts from the Government in order to continue working.

The National Platform in Defense of the Transport Sector, organizer of the strike last March, called its associates this weekend to a vote to decide whether or not to reactivate the strike. According to the results made public this morning, which have not been broken down by community, 41% of the participants voted in favor of the protest and 45% against it. For the moment they will try to continue negotiating with the Government the future Transport Chain Law, which will prevent the sector from working at a loss.

The main associations of Galician carriers refuse to join a possible strike due to the continued rise in fuel prices. They assure that they do it to avoid "major damage" to the economy and not to "punish" the operators that do comply. But they demand that the central government intervene to implement a discounted professional diesel for this sector, and for there to be inspections that put an end to unfair competition.

The general secretary of Apetamcor, the Business Association for the Transport of Merchandise by Road of Galicia, Myriam Otero, explained to Ep that her organization did support the strike called by Platform last March, but "it never occurred to her" to join a strike right now. “We have to be cautious, we are in a very difficult moment not only for transportation, but for the economy and for the whole of society,” she pointed out. However, she recalled that administrations have to "do their homework." Otero recalled that the sector has claims on the table such as the implementation of a professional fuel, as sectors such as fishing have, or the reinforcement of inspections to sanction those logistics operators and loading companies that do not comply with the measures agreed upon a few months ago.

Asetranspo, which brings together freight carriers from Pontevedra, maintains the position transferred in recent days to its partners: the rejection of a strike, maintaining the negotiation with the Government within the National Committee of Road Transport (CNTC) and demand compliance with the measures already adopted. The association points out that the extension of the 20-cent discount on the price of fuel has already been achieved, as well as other measures, such as the revision of the price of transport based on the price of diesel. "What we have to do is that, to the shipper who does not pay, we stop providing service, because it is not possible to work below cost," says this association.

The vice-president of Tradime, Lugo's carriers' association, José Fernández, spoke in a similar vein. Speaking to Ep, he indicates that his organization does not support a strike, that "now what it touches is to apply the measures" that already exist, and is committed to "giving the Administration some time" to continue negotiating because "the rush is not good ».

In recent days, the majority association in Galicia, the Galician Federation of Merchandise Transport (Fegatramer), demanded that the subsidy per liter of fuel be increased to 40 cents, that direct aid per vehicle be recovered and control measures be implemented of competition in gas stations. "The 20 cents are welcome," said its president, Ramón Alonso, last week after a meeting with the Minister of Infrastructure, Ethel Vázquez. However, Alonso warned that "they are already absorbed by the price increase." Fegatramer asks that the discount be raised to 40 cents per liter until the end of the year. In addition, it requires that direct aid of 1,250 euros per truck and 500 euros per van be “given again”.

Fishing also calls on the Government to increase aid for fuel. The National Federation of Brotherhoods - led by the boss of Burela, Basilio Otero - today registered a request for an interview with the Minister of Agriculture and Fisheries, Luis Planas. In it they will try to explain the situation of the sector and will ask for new aid. Otero explains to ABC that the fleet is not planning a mooring as a sign of protest. However, he asserts that if urgent measures are not taken, "we are going to stop, but because we can't take it anymore." At the beginning of 2021, diesel was paid at ports for 36 cents per liter, but now it ranges between 1.2 and 1.5 euros. "It is impossible to fish with these prices, at least it should be 70 cents," indicates the senior boss of Burela.

Fishing already has the cheapest fuels thanks to the fact that it is exempt from VAT and the tax on hydrocarbons. The discount of 20 cents is also applied. But still it doesn't come. "We would have to have a larger bonus, that way we would have some possibility of viability," emphasizes the president of the National Federation of Brotherhoods. Otero asserts that in Galicia there are still no ships that have had to stop, as is already beginning to happen in the Mediterranean fleet,

1 Canary Islands and Morocco, face to face to talk about... 2 Rubén Albés, student of Benito Floro, new trainee... 3 Damiano Tommasi, from playing for Levante to becoming... 4 Torrejón, prepared for the NATO summit: 28 delegations,... 5 Silván trusts that the PP leadership "will not... 6 A woman dies run over by a van in Zamora 7 France asks to allow Iran and Venezuela to return... 8 Until when can the income statement be made? 9 "Lewandowski wants to show that he is better... 10 The Iacobus Maris unfurled sails in Genoa 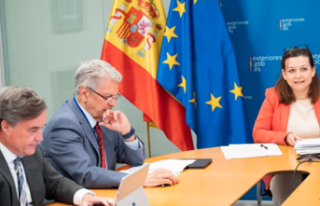 Canary Islands and Morocco, face to face to talk about...