Threats or witch hunts: schism in the First RFEF due to a complaint against Rubiales

The judicial investigation opened against the president of the Football Federation, Luis Rubiales, for alleged threats, coercion and prevarication, following a complaint filed by five First RFEF clubs, has caused a crack in this category, the third in Spanish football . 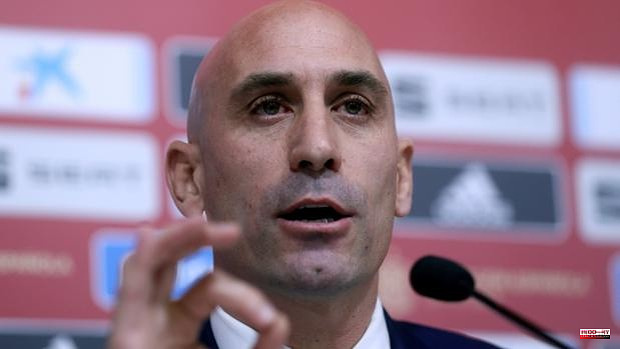 The judicial investigation opened against the president of the Football Federation, Luis Rubiales, for alleged threats, coercion and prevarication, following a complaint filed by five First RFEF clubs, has caused a crack in this category, the third in Spanish football . Several groups have denied through statements on their social networks that they felt threatened or coerced at the meeting called by the RFEF on March 10, as the five entities that have taken this matter to justice have denounced.

The founding groups of the Association of Third National Category Football Clubs (UD San ​​Sebastián de los Reyes, DUX Internacional de Madrid, Rayo Majadahonda, Balompédica Linense and Linares Deportivo), the so-called club of the five, have denounced in court that At that March meeting, they felt threatened and coerced by Rubiales, the general secretary, Andreu Camps, and a director of the RFEF, Tomás González Cueto (the three under investigation) with the aim that they renounce the exercise of their constitutional right to association .

As reported by the Association of Third-Party Clubs, those investigated "threatened the complainants with expulsion from the competition in which they militate, with the imposition of financial sanctions and deny them access to the financial aid to which they are entitled and which manages the RFEF”, if in 48 hours they did not dissolve their association, legally created. The head of the Court of First Instance and Instruction number 8 of Majadahonda (Madrid) understands that the facts denounced by the clubs "have the character of an alleged crime of threats, coercion and prevariation" and, according to EP, has agreed to initiate preliminary proceedings , including taking statements from Rubiales, Camps and Cueto.

But the Andalusian is not the only club that has manifested itself in this sense. Sabadell, Nástic de Tarragona, FC Andorra, FC Barcelona, ​​​​UD Costa Brava and UD Cornellà, all of them present at the meeting, affirm in a statement that "they did not have the feeling that behavior outside than is usual in meetings between such a large group of clubs, with different opinions, controversy and points of view, neither by those denounced nor by anyone.

CD Badajoz has also published a statement explaining what happened at the meeting. "In said meeting we were told and informed that the recently created 'Club Association' violates the federative regulations of the RFEF, UEFA and FIFA. For this reason, it was reported that all those clubs or SADs that join said association will not be able to register in the indicated sports category or compete in it next season for failing to comply with the aforementioned registration regulations, ”says the Extremaduran entity.

"During the meeting called by the RFEF with the clubs that make up the First RFEF on March 10, 2022, we are not aware of any criminal action by the aforementioned managers," explains Alcoyano, another of the teams, in his statement. to ensure there were no threats or coercion at the March meeting. It has also manifested itself in this sense, for example, the Calahorra.

1 A New Mexico fire destroyed the New Mexico Elk Calves.... 2 Twitter will pay a $150million fine for improperly... 3 The elderly couple from Uvalde who prevented a major... 4 "I don't know how to live without you":... 5 Oklahoma Governor Signs Nation’s Most Restrictive... 6 These are the Overlooked Strategies to Pay College 7 Cuba does not stop the stampede: another athlete escapes... 8 Straitchallenge Regatta, the great challenge for sailors... 9 The XXVI Tabarca Vela Diputación de Alicante begins... 10 Russia bombs more than 40 cities in its offensive...