It is Monday and the El Retiro library is closed, with two of its doors sealed by canvas and fans. 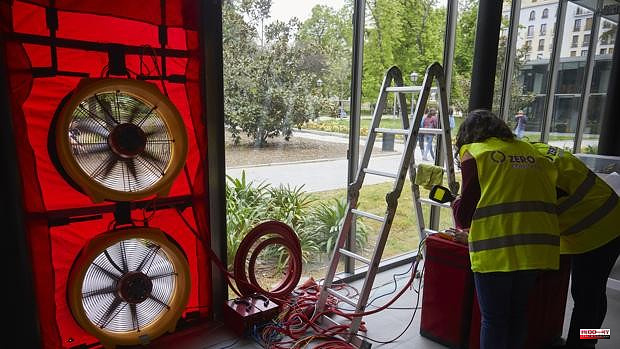 It is Monday and the El Retiro library is closed, with two of its doors sealed by canvas and fans. Three girls stand in front so that the air ruffles their hair, they smile and wave their arms, while inside the depressurized building a dozen people collect data. A day to study the energy behavior of one of the most representative structures in Madrid, the Eugenio Trías library, erected in 2013 on the park's old Menagerie, declared a Site of Cultural Interest (BIC) and within the Landscape of Light, the Prado-Retiro axis that in 2021 was incorporated into the list of World Heritage Sites.

"The objective is to take energy data from the building to see what situation it is in, where the energy losses are and determine what improvements it would be convenient to make," explains the head of the council's Maintenance and Sustainability department, Ignacio Montillo.

The hum of the three fans connected in series intensifies to expel 27,000 cubic meters of air per hour and reach up to 30 pascals of pressure (from an initial figure of 10 pascals). "They start up to extract the air from inside and measure the volume of air that we can suck out of the building, we compare it with the building's own volume and with the envelope, and we see if we are taking out more volume than we have to see if there is small infiltrations”, details Laura Robledo, from the company Zero Consulting.

The library has been selected for this pilot test that the city council has awarded to the Enrique Bardají architecture studio, in collaboration with Bernd Steinmuller, one of the forerunners of the German Passivhaus institute – which grants the highest energy efficiency certification to buildings –, and Zero Consulting, specialized in obtaining this type of certificates. The fans whistle and Robledo walks the perimeter of the building with a thermographic camera that captures the temperature drops in joints and windows. “The coldest points are the weakest points that at a thermal level have losses to evaluate”, he says, “look, you can see the air current there”, and points to a wooden stick that shakes itself in a corner.

Data from this so-called 'blower door' trial will be revealed in the next month along with proposals for improvement. The goal is to obtain one of the "green" seals granted by prestigious international organizations, such as Passivhaus, LEED, BREEAM, VERDE (the only Spanish certification) and DNGB. Seals that evaluate thermal comfort, air quality, user perception... "The building has to be comfortable, efficient and at a reasonable cost, it's not about making any kind of investment at any price," says Arturo Garcia, another Zero Consulting employee, who shoots at the windows with a white smoke machine.

In the rooms behind the glass facades of the municipal library with the most influx in the city –120,588 visits and 105,966 borrowed materials last year– the holes and grilles of what was the Madrid zoo until 1972 remain. Also the projections, converted into corners reading, where the animals lay down in the sun; the same ones through which the white smoke sneaks in, revealing the leaks in the structure. "The south façade suffers a lot, the sun hits it all day, with the heat it expands and with the cold it shrinks," says Montillo, municipal manager of the contract awarded for almost 60,000 euros.

The challenge, however, is to reconcile energy efficiency with the protection of heritage. Hence the importance of this project with which the General Directorate of Cultural Heritage intends to identify measures that do not jeopardize the heritage values ​​of the old Casa de Fieras. A novel essay that the consistory intends to extend later to other public buildings.

Once the Enrique Bardají study analyzes the data, compiled by a computerized system connected to the fans, it will determine the degree of hermeticism and propose the reforms that will foreseeably tackle enclosures and critical points. In the near future, the sustainable evolution of the Eugenio Trías library will be able to save between 60 and 90 percent of its monthly energy consumption.

1 SEPE aid with less than one year worked 2 60% of juvenile offenders act under the influence... 3 Emergency reception: a helping hand when it is most... 4 Swap your ticket: Rimouski follows suit 5 A Spanish battery exchange system ends the 'anxiety... 6 How is the battery of an electric car 7 The secret of the anechoic chambers where future vehicles... 8 Volkswagen Taigo: little deposit for a powerful engine 9 COVID-19: Six new “fever” deaths in North Korea 10 The keys to the new abortion law that is being debated... 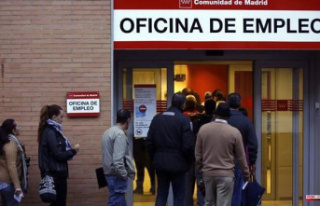