The president of the Diputación de Toledo, Álvaro Gutiérrez, and the mayor of Olías del Rey, Charo Navas, inaugurated this Friday the new municipal swimming pool that the city council has built in the town with the support of the provincial institution and which has meant a investment of 300,000 euros, which improves the sports infrastructure of the town of Toledo. 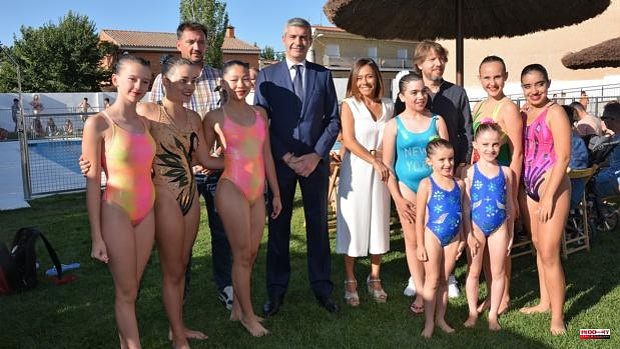 The president of the Diputación de Toledo, Álvaro Gutiérrez, and the mayor of Olías del Rey, Charo Navas, inaugurated this Friday the new municipal swimming pool that the city council has built in the town with the support of the provincial institution and which has meant a investment of 300,000 euros, which improves the sports infrastructure of the town of Toledo.

Álvaro Gutiérrez has shown his satisfaction with this new infrastructure with which the mayor and her municipal government team continue to make progress in providing services to residents and make their commitment to remodel the municipal swimming pool enclosure a reality, which increases both the number of vessels to the bathroom as well as the green and recreational areas.

For this reason, he congratulated the entire town and Charo Navas, with whom he shares a way of doing politics focused on serving the public and working so that towns like Olías del Rey continue to advance and offer quality of life to their inhabitants.

He has considered the 190,000 euros that the provincial government has allocated to the construction of this new pool to be very well invested through two annuities of the Provincial Infrastructure and Services Plans program and has highlighted the effort of the city council that has contributed the remaining 110,000 of the budget of the project that amounts to those 300,000 euros.

Gutiérrez has highlighted the boost that Charo Navas and his team are giving to the town in projects that are becoming a reality, such as the new municipal swimming pool and in some of which he has had the help and financing of the Provincial Council, which, in so far this legislature, they already exceed one and a half million euros in investments.

The new pool has a 20x10 meter pool and, together with the improvements included in the treatment plant and previous actions such as the elimination of the privatization of management, the rehabilitation of changing rooms, access areas and first-aid kit, lighting, the terrace and elimination of barriers make Olías del Rey offer its neighbors a modern, comfortable and adequate facility to the demands.

The inauguration of the new pool could not have had a better premiere than that of the swimmers of the Synchronized Swimming Club of Toledo 'Syncro' who offered beautiful exercises of this sports discipline and of which a young neighbor of Olías del Rey, Aitana Torrecilla, is part. champion of Castilla-La Mancha in individual and also in duet with Alicia Bravo, who also participated in the exhibition and both will compete in the Spanish Championship on July 14.

The new pool offered those present a sporting moment with the exercises of Aitana, Alicia, Inés, Carolina, Iría and Leire, the youngest of the 8 and 6-year-old team who received a warm ovation and congratulations from Álvaro Gutiérrez and Charo Navas .

1 A demonstration in Valladolid cries out against the... 2 A 28-year-old man, injured by a knife in a brawl in... 3 Hundreds of people crowd the Plaza de la Catedral... 4 Bautista yields to Tsitsipas in the Mallorca final 5 Spain, bronze in 'highlight' at the World... 6 The best news for Rafa Nadal: "I can walk normally... 7 Graffiti conquers the halls of the National Museum... 8 The PP applauds that the Government 'copies'... 9 'Stranger things' and the luck factor in... 10 Galician beaches are left without lifeguards: "It... 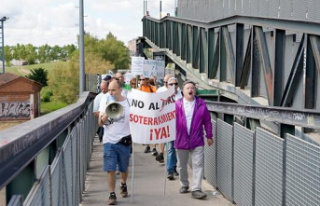 A demonstration in Valladolid cries out against the...