The Spanish Association Against Cancer of Salamanca has asked this Tuesday for the collaboration of Salamanca society and institutions to convert the Plaza Mayor into a smoke-free space. 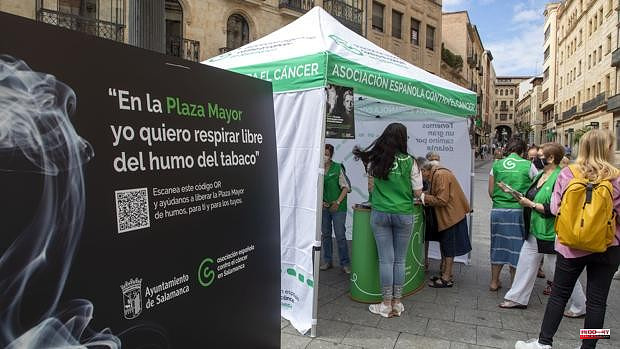 The Spanish Association Against Cancer of Salamanca has asked this Tuesday for the collaboration of Salamanca society and institutions to convert the Plaza Mayor into a smoke-free space. To do this, the organization has set up a tent in the Plaza del Liceo, which will remain throughout the week, where anyone who wishes can affix their signature in support of the initiative. It involves accessing a mobile application through a QR code and selecting the Salamancan agora as a place without tobacco.

Precisely, this Tuesday, World Anti-Smoking Day, and the provincial president of the AECC, Ángel Losada, took the opportunity to promote this initiative that the organization promotes at a national level and that involves 13 other emblematic spaces throughout the country.

“From its strategic plan, the association fights to reduce the vulnerability of people. We are not talking about reducing anyone's freedom, but about guaranteeing access for all citizens, especially the most vulnerable, to public health », he explained to the media from the Liceo tent.

According to their data, around eight million people die each year in the world due to the influence of tobacco consumption, of which one million have never smoked. “This means that the effects of smoking are not only for people who smoke, but for all citizens. Including those who cannot choose, such as workers, who are exposed to tobacco for work reasons and, above all, minors, "he warned in statements collected by Ical.

For this reason, the AECC promotes a new law against the consumption of tobacco in the public sphere. "In Spain we have two recent legislative initiatives, from 2005 and 2010, which have really meant progress in the fight against smoking, but we consider that today the regulation is insufficient", pointed out the provincial president, since, according to According to data from the Cancer Observatory, which has been working for decades to identify the direct and indirect impact of smoking and cancer, "Today 30 percent of cancers, one in three, are caused by tobacco."

The president of the AECC in Salamanca has focused his speech on the work of raising awareness. "We want all of society and public administrations to help us convert the Plaza Mayor in Salamanca into a smoke-free space," he insisted, recalling that, "on a terrace, the impact of tobacco reaches up to eight meters beyond the place where you're smoking, and 24 hours after you put down a butt, 40 percent of the harmful effects of tobacco still remain."

In Salamanca, a fifth of the people who die from cancer is due to tobacco. “We hope that the society of Salamanca wants to have smoke-free places and protect the most vulnerable from these effects. That is why we are launching a call for talks today. We already have some entities that want to collaborate with us, such as the Usal, the Provincial Council and the City Council, of course, with whom we have been speaking for some time", he pointed out, emphasizing to conclude that, from the point of view of the AECC, "yes there is legislative margin» so that the initiative comes to fruition and the Plaza Mayor of Salamanca becomes a smoke-free space.

1 Zelensky's political adviser points out that... 2 El Corte Inglés manages to reduce debt to 2,500 million,... 3 Garzón limits the telephone waiting time for customer... 4 Álvaro Alarcón, the boy who was stunned by Paquirri 5 The Queen travels to Mauritania to learn about Spanish... 6 Legislative objective: more industrial weight 7 Page proposes that it is not mandatory to speak Catalan... 8 Ukraine, two games to rebuild a country 9 The National Police arrests 18 pedophiles who distributed... 10 Five minors are arrested for the assault on two young... 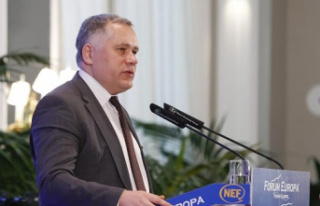 Zelensky's political adviser points out that...