Uvalde was rocked by tragedy. Journalists rushed to the Texas town to report the aftermath of Robb Elementary School's shooting.

This included NPR's own team "aEUR", and it didn’t take long before staff began to discuss how to pronounce the name of the town.

The first was "you-VALdee", an anglicized pronunciation that is widely accepted by locals.

Some people call it "ooh VAHL-deh", closer to the Spanish pronunciation or "you-VAHL day," which is a compromise between the two.

Uvalde is a predominantly Latino or Hispanic-populated town, so it is difficult to get a correct pronunciation. According to U.S. Census Bureau data Uvalde's language is on a sliding scale between English and Spanish, with many times a mixture of both.

It is important to say Uvalde correctly, as it is a long history of how Latinos were racialized in America and South Texas.

Uvalde was originally called Encina because of the oak trees found there. Later, it was renamed Encina in honor of Juan de Ugalde, a Mexican governor. It was incorporated in 1856 as a county seat.

Ricardo Ainslie is the director of The Mexico Center at The Teresa Lozano Long Institute of Latin American Studies at The University of Texas at Austin. This is because the name of the town was mispelled from its original namesake.

Uvalde is only one example of how many Spanish words can be anglicized in Texas, and other parts the country.

Ainslie says, "We know English was forced on Mexican-ancestry residents of Texas, probably starting with the Texas War of Independence" "Spanish was banned in schools, and children were punished for using it."

Spanish is an imposed colonial language that was forced on the indigenous peoples of the region. There is a big difference in how language is understood in Latin America and the U.S.

Kirsten Silva Gruesz says that language was a sign of race in this country. She is a professor of Literature at the University of California Santa Cruz and specializes in Chicano and Latino literature. Her forthcoming book, Cotton Mather's Spanish Lessons, tells the story of language, race, and belonging in the Early Americas.

She explains that there is an additional layer to the U.S.: "Spanish is a language associated with a particular kind of working-class identity." It was associated with people who were racialized and discriminated against. They were forbidden from drinking certain fountains and were not allowed to enter certain schools.

The Chicano movement, which was founded in the 1970s and continued throughout the decade, sought to empower Mexican Americans and other Latinos and to secure equal rights and recognition. Chicanx writers and activists worked to reclaim Spanish and Indigenous languages and honor their African roots.

Gruesz explains that all of these factors demonstrate how language was the first real marker of Latino identity in America.

Stella M. ChA!vez is an immigration and demographics reporter for NPR member station KERA. She was born in Waxahachie Texas to Mexican parents. Although she says her parents spoke Spanish, she recalls hearing her father anglicize a word in their white town.

To the delight of his daughter, he called himself Mr. "cheVEHZ" at a parent-teacher conference.

ChA!vez stated that "He didn’t want to be different." "When I was a child, my first reaction was to say, "God, Dad, why don't we just get it?" It's not hard to say it. Now I feel more empathy. And then, when I understand why he did that, it makes me sad and angry.

As she grew older, she said she experienced other examples, such as the way people used "GuadaLOOP" to refer to Guadalupe (the main campus at UT Austin) while she was studying there. She didn't mind hearing the words in English. It's part and parcel of the code-switching that bilingual people live with every day in America.

ChA!vez began to feel more comfortable saying the words in Spanish when she took Latin American and Mexican American studies classes. This is not only about pronunciation, but also marking the accent in her last name.

She says it feels awkward not to do so. It's almost like she is erasing a piece of her culture.

ChA!vez was there to report on the events last week. She felt the same conflict again. Although she started out using Spanish pronunciations, she was soon saying "you-VALdee" at the end.

According to her, the most important thing is to listen to how others say their names or their hometown.

She says that just because there is a majority Latino community, it does not necessarily mean that everyone speaks Spanish fluently. "Some people are perfectly fine with it aEUR." I mean, if they have lived there all their lives and know how to pronounce 'you-VALdee', that's also okay.

ChA!vez was not the only one to find herself returning to Spanish. She claims that even those she spoke with in English would switch to Spanish to simply say the name and town.

She also explains that there is another tension between the Spanglish mix, which has been in Texas for generations, and the traditional Spanish or Indigenous languages, which have recently arrived from Latin America.

This all points to the possibility that there's not one right way to name a town aEUR". Gruesz believes that this is okay. Perhaps the best way to portray a community's past or present is to allow for its messiness.

She explains that "Language exists aEUR" and it isn't fixed. "Academies and purists can fix it or correct it. But people are alive, language changes over time, and that's what keeps it vibrant and interesting." 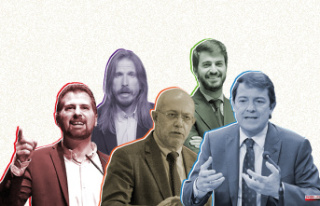 Sanchez and Casado pass an exam in Castilla y Leon...