Four years have passed since the Madrid taxi drivers 'painted' Paseo de la Castellana white to protest against the lack of regulation of the VTCs that run through the city. 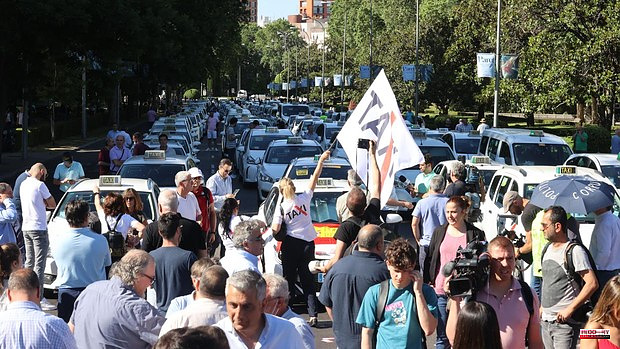 Four years have passed since the Madrid taxi drivers 'painted' Paseo de la Castellana white to protest against the lack of regulation of the VTCs that run through the city. During this time, little has changed in the conflict between the drivers, who again see that their "future is at risk." For this reason, this Wednesday, although not as massive, the scene has been repeated on the Paseo del Prado. Once, they cried out for days against Minister José Luis Ábalos; today, they have done it for a couple of hours against the president of the Community of Madrid, Isabel Díaz Ayuso, who tomorrow plans to approve the new Transport Law in the Assembly that allows VTC companies to continue working in the city of Madrid beyond from October 1.

Shortly before ten o'clock in the morning, the taxi drivers - summoned by the Madrid Professional Taxi Federation (FPTM) - have parked their cars between the Neptuno fountain and the Cibeles, causing the partial closure of traffic in the ascent lanes of the Paseo del Prado. "The PP sells public services", "Ayuso resigns", "Ayuso asks for freedom only for the wealthy" and "For compliance with ratios 1/30" are some of the slogans that have been read on the banners carried by the drivers. “This law is one more outrage by the Ayuso government, which wants to make a tailor-made suit for the VTCs, with an unregulated standard and without sanctioning regimes for the VTCs,” explained Julio Sanz, president of the FPTM, a majority organization of the sector, minutes before the march began. From the regional government they have estimated 425 attendees to the march, when in Madrid there are 15,000 taxi licenses; the drivers, speak of more than 1,500 participants.

The sector criticizes that the president approves the norm tomorrow through the urgent procedure and single reading, "without giving - they say - the option to other political groups to debate." «If nobody fixes it, a law from 1998 will be modified. We are above good and evil in Madrid. And this is a red carpet for three or four opportunists, platforms that group together thousands of VTC cars as if they were taxis," criticized Sanz, who has estimated 9,000 black vehicles with drivers that work in the city, a number that fails to comply. the marked ratio of one VTC for every thirty taxis. "In Madrid, this is already one in two," said the representative of the sector.

Another reason for criticism is the lack of transparency that the regional government shows with the law. At the moment, as far as they know, the text does not regulate the working hours or rest days of the employees of Uber, Cabify and Bolt. «This way you cannot compete, we want the laws to be regulated for the benefit of all and not for the benefit of three or four. The PP has deceived us, both the Minister of Transport, David Pérez, and President Ayuso have taken us for a ride. They have not met with us again. You cannot play with the future of thousands of families and thousands of users and pass a law through the back door," concluded Sanz, who has ruled out, for the time being, going on strike, although they will take the law to court. for alleged "prevarication".

After the initial speech, the taxi drivers have marched calmly and without incident between Cibeles and Puerta del Sol, along Calle de Alcalá. At the head of the delegation was a van from which false bills with the face of the Madrid president have 'rained'. "Ayuso, how much do you sell yourself for?" They asked them. Some of the briefcases have been deposited at the door of the Royal Post Office, seat of the regional government.

Inside this entourage, Montserrat Inestal and Fernando de la Fuente walked. She has been in the taxi world for four years; he, about 40. Inestal bought the license for 145,000 euros and decided to leave her job as purchasing director of a company. «The taxi gives me a security that another job did not give me, being mine. The pity is that the Spanish business fabric does not charge them", explained the driver: "The city council allows me to buy the license at that price and now I have a loss of assets, thanks to the fact that the VTCs have had a four-year moratorium. Now what?" She has questioned her, referring to the Abalos decree, which in 2018 left it in the hands of the autonomous communities to regulate the VTC before October 1, 2022.

As for De la Fuente, one of the veterans with almost four decades at the wheel of his white car, he has demanded that Ayuso not ignore them. “We ask that he sit down to talk with the sector. We are a public service with more than 100 years old », the driver has demanded:« They stop doing the work illegally and the 1/30 is fulfilled », he has added.

After 40 years as a taxi driver, his balance is positive. «The taxi or you like it or you run away. I have had the job I wanted, which was driving, and a good deal with the public », he assured. During the pandemic, he acted as a solidarity taxi taking 3D screens to hospitals, doctors and nurses that he collected from the homes of some young manufacturers. They also took them to residences. In Filomena, he put winter tires and brought blankets and food to the homeless from Father Ángel's association. Now, he has a Ukrainian grandmother, his daughter and granddaughter in his house for two months. A colleague of his went to pick them up in the convoy of taxi drivers that left Madrid two months ago. "It was my wife and I, because our three children have long since lived at home, and now we have returned to being a large family," said De la Fuente: "The unpleasant thing is that you do what you think is convenient and that overnight you see that others just want business, business and business. Steal work to do business. Without incident, before twelve o'clock in the morning, the march ended, as planned.

At the beginning of May, the Governing Council of the Community of Madrid approved the bill so that the VTCs can continue transferring clients through the streets of the capital from October 1, the day marked by Ábalos so that the permits for platforms to work inside cities, as long as the Autonomous Communities do not regulate them. If these did not, the VTC could only make intercity routes, but not urban ones. Ayuso's law reverses this decision and allows them to continue with their day to day as before. "If there is VTC, if there is Uber, if there are scooters and bikes and there are shared vehicles, it is not because the Community of Madrid wants it, it is because the citizens want it," said the president of the Community of Madrid, Isabel Díaz Ayuso, before to initially approve the text: «What this Government does is respect all the mobility options that citizens freely ask us for today and we are not going to follow the path of other regions, such as Catalonia, where everything is prohibited and where everything is impoverished . Nor are we going to let some sectors engulf the others, leaving many professionals helplessly out of the market, neither them nor their families."

1 The Minister of Science and Innovation asks the opposition... 2 A calving cow attacks five hikers on Mount Valonsadero... 3 Valencia will be one of the Davis Cup venues for the... 4 Experts foresee greater rigidity in contracts due... 5 Bale's emotional farewell letter: "I have... 6 The new pumping station in Villamuriel (Palencia)... 7 The National Police prevents a woman from committing... 8 The Supreme closes the door to a 'domino effect'... 9 DCODE finally celebrates its tenth anniversary 10 How to prepare for a "blackout" in seven... 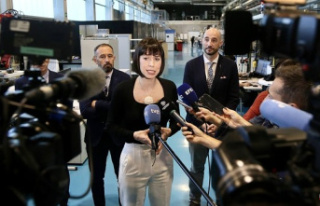 The Minister of Science and Innovation asks the opposition...