The Salamanca Plazas y Patios program reaches its eleventh edition with a total of 37 cultural events during the months of July and August. 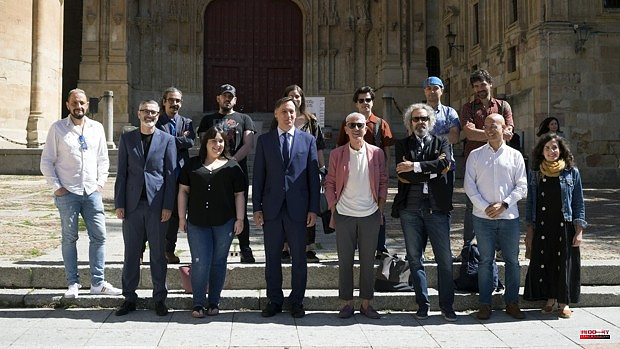 The Salamanca Plazas y Patios program reaches its eleventh edition with a total of 37 cultural events during the months of July and August. As announced on Tuesday by the mayor, Carlos García Carbayo, among these events are three theatrical premieres by local companies, the fifth edition of the International Jazz Festival, three concerts in the Plaza Mayor, the first Conference on Traditional Culture, concerts in the DA2 patio and in the Santo Domingo Gardens, a musical show on the Tormes River to commemorate the 20th Anniversary of the European Cultural Capital of Salamanca and film screenings in different neighborhoods of the city.

The three theatrical proposals are carried out by the Salamancan companies Etón Teatro, Intrussión Teatro and Edulogic Producciones.

The scenic section of the Salamanca Plazas y Patios cultural program is dedicated to the 500th anniversary of Nebrija's death and will feature three world premieres by three companies from Salamanca. They will all be in the Patio Chico and will have sign language interpreters, so they are accessible to people with hearing disabilities.

The first is entitled 'Nebrija y los Espejos' and is a proposal by the Etón Teatro company, written and directed by Ángel González Quesada and performed by Marta Benito, Alberto Boyero, Gloria Escudero and González himself. With an "unequivocally comic-satirical" tone and spirit, the author presents a short piece of homage, tribute and remembrance to maestro Elio Antonio de Nebrija on the fiftieth anniversary of his absence, of which three performances have been scheduled on the 1st, 8th and July 15.

And the last of the premieres will be carried out by the Salamancan company Edulogic Producciones, entitled 'Salamanca is written with capital letters' and three functions have been scheduled on August 12, 19 and 26. It is a comedy in which Elio Antonio de Nebrija has left home to drink wine with friends and has ended up in the Patio Chico asleep and surrounded by strange dreams and nightmares in which Isabel la Católica, his adviser, Colón appear and the same. Admission to all these activities will be free until capacity is reached.

As García Carbayo explained, music will be "one of the great attractions" of the summer cultural program prepared by the City Council, through the Salamanca City of Culture and Knowledge Foundation, with a total of 23 concerts scheduled in five different spaces: Plaza Mayor, Patio Chico, Gardens of Santo Domingo and DA2 patio.

The Plaza Mayor will be the scene of three concerts. The first will be on July 1 and will be performed by the Freixenet Orchestra of the Reina Sofía School of Music. This concert will be the inaugural of the Chamber Music Cycle of the Group of World Heritage Cities of Spain and will be broadcast live on 2 de Televisión Española.

The RTVE Symphony Orchestra and Choir will offer a concert on July 15 in the Plaza Mayor dedicated to zarzuela, which will also be broadcast live on TVE's La 2. This concert is part of the activities scheduled by the City Council to commemorate the twentieth anniversary of the Cultural Capital of Salamanca. And on Monday, July 18, it will be the turn of the Castilla y León Symphony Orchestra, which will also delight with its music in the Plaza Mayor.

The Patio Chico will host the 5th International Jazz Festival organized by the Salamanca City Council on July 12, 13, 14, 16 and 17. The Monty Alexander Trio will be in charge of opening the festival on Tuesday, July 12, followed on the 13th by New York guitarist Peter Bernstein accompanied by pianist Dado Moroni. The singer and pianist Champian Fulton and the saxophonist Harry Allen will star in the concert on July 14. On Saturday the 16th it's the turn of Dameronia's Legacy, a band created in the eighties by arranger Don Sickler and drummer Philly Joe Jones. And the final touch to the V International Jazz Festival of Salamanca will be put on by the Cyrus Chestnut Trio Terell Stafford on Sunday, July 17.

All these concerts are scheduled at 10:30 p.m. in the Patio Chico and tickets for the limited seating area are priced at one euro. On Monday they will go on sale on the Ciudad de Cultura website. In the rest of the Patio Chico, admission will be free until full capacity is reached.

In addition, the concerts return to the Gardens of Santo Domingo with ten scheduled performances. The Salamancan group La nouvelle Helmantique will be in charge of opening this new season with a jazz concert scheduled for Saturday, July 2. On the 9th it will be the turn of the Aulos Wind Quintet, a concert held in collaboration with the Venancio Blanco Foundation. On July 23, the group Orontes will offer a fusion of music with Mediterranean and Eastern influences, with jazz elements and even African music.

On July 27 and 28, the 1st Conference on Traditional Culture will be held in the Gardens of Santo Domingo with a round table entitled 'From the past to the present, what we were and what we are', with the participation of Miguel Manzano and Joaquín Díaz, moderated by Cefe Torres. And two concerts, one by the Vallarna folk group, made up of four musicians who create their own version of the traditional music of Cantabria and Castilla y León, and the other by one of the founders of Celtas Cortos, Carlos Soto and his folk Quintet, Castijazz, who will offer a musical journey around the world based on Iberian rhythms and melodies. During these days, an exhibition of charro bagpipes will be inaugurated, from the private collection of Francisco and David Vicente, and the ethnographer from Salamanca, Ángel Carril, will be remembered on the occasion of the twentieth anniversary of his death.

On July 30 it will be the turn of The Wave, a band that takes as a reference the great masters of black music, such as James Brown, Stevie Wonder or Bootsy Collins among many others.

In the month of August there are four scheduled concerts, all of them by groups from Salamanca. Khord, who will perform on August 6, performs music that moves between contemporary jazz, chamber music and folklore, using strings, voice and percussion, and opening spaces for improvisation. The Black Chillies (August 13) mix blues and Rock and Roll, the jazz of Alejandro Lucas Trio will delight us on August 20 and the Contrastes Trio will be in charge of closing the concerts in the Gardens of Santo Domingo on August 27 with works of Albéniz, Turina, Bretón and García Leoz.

On the occasion of the 20th Anniversary of the Cultural Capital of Salamanca, two performances of the musical show 'Flota IdóneA-El piano floating. Music and dance on water' by the company Le PianO du Lac. It will be on July 27 and 28, at 8:30 p.m. on the Tormes river, on the Paseo del Progreso at the height of the Enrique Estevan bridge. An aquatic ballet in which the melodies of the flute, percussion and dance steps merge.

The program is completed with three concerts by the groups from Salamanca Kritter, Carameloraro and Señor Perro in the Patio del Da2 and the screening of six films aimed at family audiences in different neighborhoods of the city.

1 The region, the only one in the PSOE that votes against... 2 The King and Biden agree at the Royal Palace: "We... 3 Dozens of missing and charred bodies in the ruins... 4 The dismissed directors of Indra reveal that the Government... 5 Wave of robberies at San Roque de Lepe 6 Paco Roncero, the chef who feeds NATO leaders in Madrid 7 The impossible mission of approaching the Royal Site... 8 The Chamber approves the law that will help the municipalities 9 The Mónica Oltra case, pending the appeal of her... 10 The Supreme Court ratifies the dismissal of Villar... 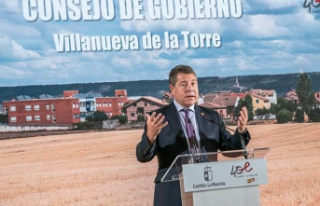 The region, the only one in the PSOE that votes against...