The RFEF Assembly supports Rubiales and approves his new salary

Luis Rubiales again described as "noise and falsehoods" the information that appeared in the last month about his supposed irregularities at the head of the Spanish Football Federation, and pointed directly to his uncle, Juan Rubiales, his former chief of staff, as the person who is behind the leaks. 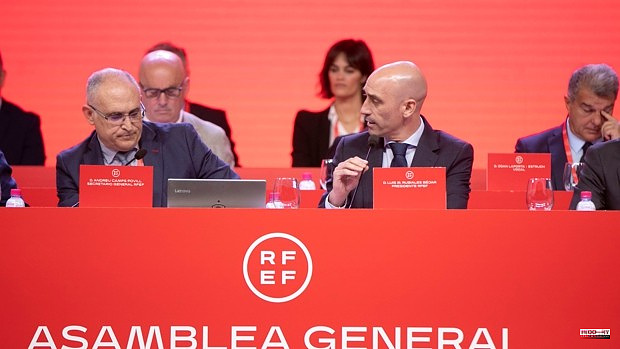 Luis Rubiales again described as "noise and falsehoods" the information that appeared in the last month about his supposed irregularities at the head of the Spanish Football Federation, and pointed directly to his uncle, Juan Rubiales, his former chief of staff, as the person who is behind the leaks. Rubiales, who had indicated the General Assembly of the RFEF as the place where he would give the explanations requested by the Government and the CSD, once again defended his management and received the majority support of the assembly members, who, among other things, approved the new remuneration of the president , which becomes 675,761.87 euros gross (371,669.03 euros net), plus housing assistance of 3,000 euros gross per month (1,650 euros net).

The variable part linked to sponsorships or own income of the Federation is eliminated.

One of the big questions that the General Assembly of the Spanish Football Federation had to resolve had to do with the level of support that Luis Rubiales has after uncovering the audios and information that compromised his integrity at the head of the organization. The answer was given by the votes. The proposals of Rubiales had no votes against, not a single question in the shifts enabled for it. The Assembly endorsed the actions of its president.

To defend his administration, Rubiales took cover behind two squires. Or three, if you take into account Alejandro Blanco, president of the Spanish Olympic Committee, who took advantage of the first speech in the morning to show his explicit and reiterative support for the president of the RFEF, with a hug included. "I fully trust the work you are doing. You will always have my respect, my admiration and my love." Everything, the same day that new information from El Confidencial puts Blanco in the spotlight by assuring that he is pressuring the Government and the CSD not to intervene in the Federation by being splashed by the recordings stolen from Rubiales.

Tomás González Cueto, External Control Commissioner, had to defend the performance of the RFEF in the contract with Saudi Arabia for the Super Cup. "The Saudi side hired a company, Kosmos. They signed that brokerage contract. Sela is the company that has paid the commissions that they freely agreed to. The RFEF does not pay those commissions and will not pay them," he said about the commissions received by Gerard Piqué's company and by the Federation itself.

He also defended the contract despite the doubts of the members of the Federation's Ethics Committee: "They gave a favorable report to the celebration as long as a series of conditions were met. I do not know if the members of that commission saw the contract, what What I do know is that all its conditioning factors are set in it".

The last compromised intervention corresponded to Andreu Camps, secretary general of the Federation, who tried to derail the investigation opened by the Anti-Corruption Prosecutor's Office after the denunciation of the commission of up to five crimes: corruption between individuals, corruption in business, unfair administration, administrative prevarication and bribery. "Not a single public euro has been allocated to espionage or monitoring of unions. Neither public money nor a single euro of private money from the Federation. The RFEF has nothing to do with this issue and has paid absolutely nothing," he explained about the alleged espionage of David Aganzo, president of the AFE. Regarding the alleged recordings of politicians and personalities, Camps was the first to point out Juan Rubiales, the president's uncle and his former chief of staff, who according to information that appeared this Monday in OK Diario would be behind the smear campaign against his nephew along with Javier Tebas: "If any employee in a personal capacity had been able to carry out certain illicit actions, they should be the ones to respond. An investigation has been opened."

Rubiales, who was absent from the Assembly when his new remuneration was debated and voted, stressed that possibility while the RFEF accounts were being debated: "That Federation employees are passing on information and attacking when we are in the best moment of our history...". The president also had to defend his controversial trip to New York paid for with Federation funds: "The RFEF covers a trip for three people who work in the Federation. One is me and the other two are collaborators. The RFEF does not cover anything else. It's a work trip with fully accredited meetings. Nothing more. They mutilate the names of two collaborators to make it appear that I'm going alone on that trip. I'm accountable for my work, not for anything else."

"In the face of lies and manipulation, we are going to continue with rigor as a flag", concluded Rubiales the Assembly before being dismissed with applause by all its members.

1 Videos. Cannes: A kiss between Lindon & Bouquet... 2 Legislative in Lot-et-Garonne - 3rd Constituency:... 3 Europe points out the lack of involvement of cities... 4 Goirigolzarri points to Francisco González and Ángel... 5 Two men killed a woman as they fled a police check... 6 Incidents at Stade de France: Darmanin denounces "massive... 7 The province of Alicante receives 100,000 fans in... 8 Arrested a trucker who was seven times the allowed... 9 Why the war in Ukraine may spell the end of helicopters 10 On Friday, June 17, Mimizan will show flamenco and... 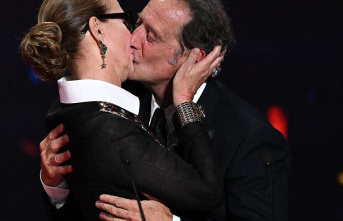