"All my life without knowing where the remains of my father rested and now we can finally take them to the family niche. 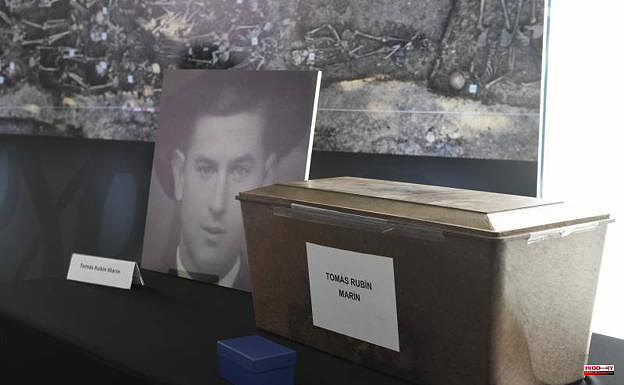 "All my life without knowing where the remains of my father rested and now we can finally take them to the family niche." Ángel Rubín did not get to know his father. Tomás Rubín died on December 3, 1936 at the Amorebieta military hospital, where he was transferred after being wounded in the fighting at Villareal, in Legutio. He was a bricklayer by profession and fought in the Civil War with the 6 ANV-1 battalion, 'Olabarri'. His remains were buried in the Begoña cemetery.

Rubín was married to Bernarda Sanz, with whom he had three children: Ignacio, Venancio and Ángel. The little ones were also orphaned of their mother shortly after, so they never knew that the remains of their father rested in Begoña, despite being a documented case.

Ironies of life, Ángel spent his whole life near where his father's remains rested. He was a worker at the Etxebarria steel mill and played soccer at the Mallona field. The remains of his father were exhumed on January 29 of this year, in the process of recovering the victims of the Civil War in the context of the 'Begoñako Argia' project. He was present, along with other family members, that day and today he has finally received the remains, which have been transferred to the family niche in the Derio cemetery. 85 years have passed.

A lifetime waiting but the rush is urgent. The award ceremony took place at the headquarters of the Basque Memory Institute, Gogora, on María Díaz de Haro street in Bilbao. It has finished at the stroke of noon and the family has had to hurry to be able to leave the remains in the family niche. The cemetery closes at 2:00 p.m. Hardly any time to take it all in.

That of Tomás is one of the 60 bodies that Gogora had identified in the Begoña cemetery. The exhumation work began in December, but a few months later, in February, a mass grave was found with another 42 bodies that had not been located. It is the largest common grave from the Civil War in the Basque Country.

Of those 42 bodies, there are five that have already been identified thanks to the plates that were tied around the neck or wrist. These badges had the number of a record for which they received the payroll. It has been thanks to these inscriptions that the researchers from the Aranzadi Science Society, in charge of the exhumation work, have been able to name them. It is what is known as documentary identification. Now all that remains is to carry out the genetic identification, which will be done with the DNA of the relatives.

In order to advance in the identification of the other 37 bodies, Gogora has contact with 64 families, whose cases coincide with that of the victims to be identified: combatant, who died in the combats of Artxanda between June 14 and 18 of 1937, prior to the fall of Bilbao. In some cases there is more documentary evidence than in others, but the idea is that the comparison of the DNA allows us to provide answers. The works will last at least one year.

The Gogora event was headed by the Minister for Equality, Justice and Social Policies, Beatriz Artolazabal, who underlined the Basque Government's "commitment" to the families of those who disappeared in the Civil War. "The dignity of this country is also in the graves and in the remains of those gudaris and militiamen who fought for freedom and whose remains we must locate, exhume and identify," she said.

The director of Gogora, Aintzane Ezenarro, and a large institutional representation have also been present. Lourdes Herrasti, anthropologist at Aranzadi University, and Marian Martínez de Pancorbo, professor of cell biology and director of the UPV/EHU's Biomics laboratory, explained the DNA identification and comparison work. An arduous task but one that is the key so that the relatives of those who died 85 years ago can finally find peace.

1 The PNV will support the audiovisual law by seeing... 2 Despite a tarnished image, Facebook remains essential 3 Hello Mbappé, goodbye Luis Suárez 4 Badalona will host the Copa del Rey basketball in... 5 They find the leader of the destructive sect that... 6 Smoke bombs, tags and firecrackers: the house of Roland... 7 Fawzia Koofi: "If the woman does not wear a burqa,... 8 Raúl García and Nico Williams, almost ruled out... 9 It's a departure for the Alliance 10 Punishment for Scholz's indecisive policy in... 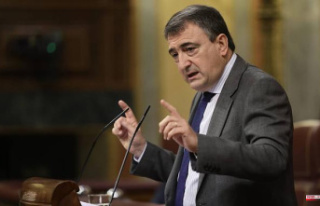 The PNV will support the audiovisual law by seeing...