José Luis Martínez-Almeida has not read a single line. 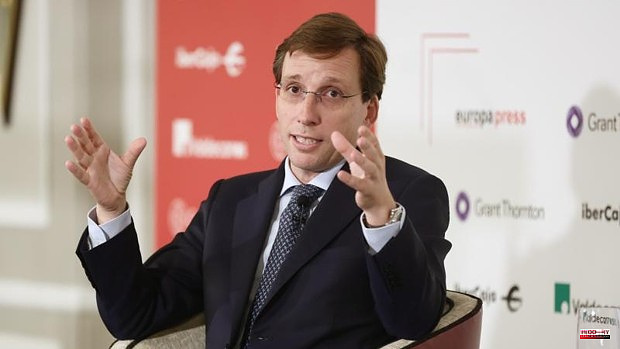 José Luis Martínez-Almeida has not read a single line. The speech, as mayor of Madrid and as spokesperson for the Madrid PP, lasted half an hour. A review of the achievements of his mandate, which will be three years old on June 15; of the management of his government, hand in hand with Ciudadanos, with whom he feels "very comfortable", and of the loyalty to Isabel Díaz Ayuso, and to his party. To the capital he has dedicated all the milestones in the international rankings of recent years —of the best urban, congress and investment destinations, of the best cities in quality of life— and two brief announcements.

The metamorphosis of the Puerta del Sol, which began last March, will open a pedestrian path in the heart of Madrid in the image and likeness of the axis that joins the Paseos del Prado and Recoletos.

"To give us an idea, when we finish this work, a Madrilenian who visits it will be able to walk from the Casa de Campo to the Thyssen-Bornemisza museum without practically crossing a traffic light," the councilor shared this Monday, during the informative breakfast organized by Europa Press. It is one of Almeida's key reforms, which he has taken the opportunity to break down the list of works undertaken (and in progress) during his term, including the colossal remodeling of Plaza de España, the dismantling of Francisco Silvela's 'scalextric' or the transformation of the North Node.

Because the breakfast, full of PP politicians, has been the perfect occasion for the councilor to speak in an electoral key. A balance of management in the third year of mandate. Almeida has taken advantage of the "unprecedented budgetary effort" in terms of works and conservation of public space. More than 600 million euros in 2020, as many in 2021 and, according to the mayor, "more than 800 million in 2022". The squares are the protagonists of these works: the city council intends to spruce up a total of 28 spaces, of which a dozen are already finished.

The tax recipe is another of the tricks that Almeida has used, a stamp of the PP. "What to say about a city council that has been able to reduce the tax bill by more than 450 million euros," he celebrated. The figure, however, was far from the initial reduction of 650 million euros that the councilor proclaimed at the end of last year, when he aspired to reduce the IBI (Real Estate Tax) rate to the legal minimum. Vox's slam, which closed the door to negotiations after Almeida recovered Madrid Central from Manuela Carmena, forced the mayor to rely once again on the councilors of the Mixed Group.

The result was a frozen IBI rate, at 0.456%, and a reduction of 34 million, instead of the 60 million promised. But Almeida has rescued his promise this morning: "This team does not give up that before the end of this legislature the IBI rate ends at the legal minimum [0.4%]." With the votes of Vox or the Carmenista councilors of the Mixed Group. The differences don't matter. "We have agreed with one and with another," acknowledged the mayor, who has sold his agreements on both sides of the ideological spectrum as proof of his negotiating capacity. “I do not want to make any cordon sanitaire for Vox”, he has declared about what was his preferred partner.

Last week, the municipal plenary unanimously approved the new model of social services, unchanged for 40 years. With 21 agreements, 114 measures and a budget of more than 1,000 million euros. Another triumph for Almeida: "So that we do not repeat the mistakes of the 2008 crisis, which gave rise to a situation and a breeding ground that Podemite populism took advantage of." A model that he has separated from the policies of the left: "Instead of subsidies and compensation, we must make the person depend as little as possible on the administration so that they recover their own autonomy."

There has been no lack of praise for Ciudadanos and the deputy mayor, Begoña Villacís. The mayor has displayed his sense of humor: "I am very comfortable with Ciudadanos, with a deputy mayor with whom I have a marriage that I have never had in my life." There was also no lack of criticism of the largest opposition group, Más Madrid, after the events denounced by its wayward mayors, who last week filed a brief with the Court of Auditors for the alleged irregular financing of the formation, which charged payments to its supporters to cover the electoral debt of Íñigo Errejón when he participated with Más País in the elections of 10-N of 2019.

The 'mask case' has been relegated to the background. "There is not a single person, not charged, not even singled out," Almeida responded to questions from the Europa Press journalist, "in any case, the city council is the victim of a possible crime of fraud." The internal war in More Madrid, after the departure of former mayor Manuela Carmena and Rita Maestre becoming the group's spokesperson, has dissolved the matter of the commission agents in which the mayor's own cousin mediated. "What will Manuela Carmena think, everyone vindicates her, they say they are her heirs, and she must think:" What have I done to deserve this "".

The praise for Madrid has been in the form of rankings. Madrid is among the ten best cities in terms of quality of life, it is the fourth best urban destination in the world (behind Paris, London and Dubai), the best congress tourism destination for the third consecutive year and, for the first time, the best destination in Barcelona for the investment of 'start ups' and entrepreneurs. “For the first time the eyes of the world have turned to Madrid”, Almeida applauded, “because the management of the pandemic has allowed all those from outside who could not go to cinemas, theaters, auditoriums..., they could. do in the city.

Cleanliness and safety have come into play. Almeida has assured that he will persecute "uncivil behavior" and will toughen the fines for bottles, painting graffiti and dirtying the clean points of the capital. The Environment and Mobility Area has not yet provided more details about this new cleaning ordinance. The councilor has also focused on environmental sustainability, which "is not incompatible with economic sustainability." A pending task for the council, which has once again failed to comply with the legal pollution limits set by the European Union. “We have failed to comply, but never so late or for so little,” the councilor defended. Another medal for Almeida.

1 The Diputación recovers the Albi Award as a municipal... 2 The School of Pastors starts with 12 face-to-face... 3 Queen Sofía supports the Soria Food Bank on its tenth... 4 A Commissioner will be created for the reconstruction... 5 Lasquetty distances himself from the new Cordish project... 6 They warn of the risk of new wild boar attacks on... 7 The firefighters of the Diputación de Alicante are... 8 The collection of poems 'Servido en Frio',... 9 Nigerian forces are hunting for gunmen who shot 50... 10 Treasury changes for the second time in five months... 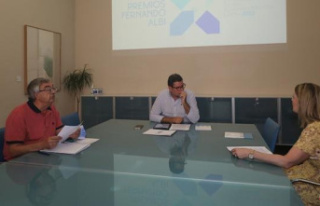 The Diputación recovers the Albi Award as a municipal...