The Plaza de Zocodover has raised its voice this Tuesday to claim the rights of the LGTBI collective with the proclamation of the Cultural Week 'Toledo Entiende' by the Talavera artist Libertad Montero 'La Pinchos', who has also offered a concert in the park de La Vega on the occasion of the activities scheduled by the Toledo City Council and the Bolo-Bolo Association for this LGTBI Pride Week. 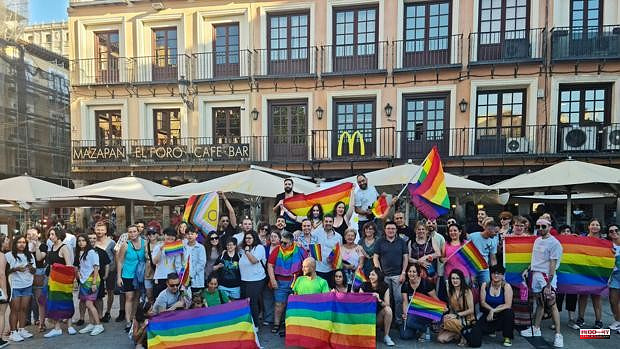 The Plaza de Zocodover has raised its voice this Tuesday to claim the rights of the LGTBI collective with the proclamation of the Cultural Week 'Toledo Entiende' by the Talavera artist Libertad Montero 'La Pinchos', who has also offered a concert in the park de La Vega on the occasion of the activities scheduled by the Toledo City Council and the Bolo-Bolo Association for this LGTBI Pride Week.

The Councilor for Youth, Pablo García, and the Councilor for Equality, Ana Abellán, have joined the proclamation together with the councilors of the Government team Teo García and Mar Álvarez. Dozens of people from Toledo have carefully followed the words with which Libertad Montero has proclaimed the Cultural Week 'Toledo Understands'.

"Today colleagues, colleagues and colleagues, is a day of claims but also of joy, visibility, party and celebration", has indicated 'La Pinchos' to affirm loudly and clearly "how lucky we are to be able to be here in Toledo, a diverse city, a friendly city, a plural city, and shout from the rooftops: Long live pride! Long live Toledo! Long live Castilla-La Mancha! », As reported by the City Council in a statement. Libertad Montero has made a request to those who have gathered in the Plaza de Zocodover this June 28, and it is that as it has underlined, "we cannot forget that those who today fill their mouths with my name, with freedom, they are the ones who have denied one after another the freedoms conquered for the Spanish people whom they say they love so much" and it is that in the XXI century "they continue to kill us, and this does not happen in distant lands where the rights of the collective are conspicuous by their absence, It happens at home, here, in this supposed social and legal state».

This Wednesday from 12:00 to 4:00 p.m. the Plaza de Zocodover will have an information table to raise awareness of the importance of taking a rapid HIV test and from 4:00 p.m. to 8:00 p.m. rapid HIV test by appointment through Bolo-Bolo.

On Thursday at 12:00 noon, the 'Workshop on the history of the collective through the years' will be held in the assembly hall of the Padilla Civic Center, in the Historic District. On Friday, the party will move to the Sonseca Family Discotheque with the 'Toledo Entiende Fest' and the participation of Sofía Cristo, Juanjo Martín, Tom Siher, Chumina Power, Brenda Star and River.

On Saturday, July 2, the day will feature two outstanding acts, one of them a tribute to Angy Kristel, a highly relevant transformist artist on stages throughout Spain during the 1980s and 1990s. This act will take place in the space 'La Divergente ' at 1:00 p.m. and will feature live music with saxophonist Tavi Gallart.

In addition, at 8:00 p.m. the demonstration has been called that will start from the Plaza de Zocodover and will run through the streets of the center to the Plaza del Ayuntamiento, where at 10:00 p.m. the delivery of the 'Javier Fernández ', founder of Bolo-Bolo 21 years ago. The recognitions, in this edition, have been granted to Angy Kristel, to the president of Chrysalis Castilla-La Mancha, Ana Belén Hernández; the former councilor Javier Mateo and the Minister of Equality and spokesperson for the Government of Castilla-La Mancha, Blanca Fernández.

The 'Over the Rainbow' party will be held on this same stage with local drag performers Fenhydra, Libula The Luxe, AMA and Roci Nanta and the visit of RoRo and Valeria Star with Piruli Dj music, as well as La Prohibida and Víctor Algora .

For Sunday, the 3rd, the Bolo-Olympics have been organized on the Paseo de la Vega with tests and games such as a high heels race, the toss of bags or a tortilla contest. At 1:30 p.m. there will be a popular paella and, in the afternoon, starting at 8:00 p.m., the LGTBI Families Day will be celebrated with storytelling and activities for the little ones in order to make visible and support education in diversity.

1 The national leader of the UGT advises García-Gallardo... 2 Pride opens a "flag war" in Cibeles and... 3 These are the cheapest hours of electricity this Wednesday 4 Presented the bullfighting posters of the Malaga Fair... 5 Carlos Baño, new president of the Alicante Chamber... 6 A worker dies in the collapse of a factory warehouse... 7 The King asks to extend NATO unity to other partners 8 Justice opens proceedings to investigate the complaint... 9 The liberators of El Escorial fight again 10 The check that Madrid needs to reduce the transport... 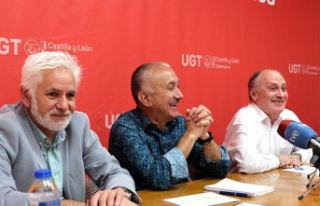 The national leader of the UGT advises García-Gallardo...