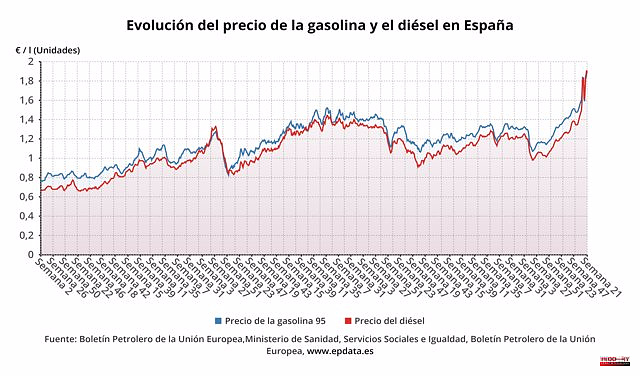 The average price of gasoline has reached a new all-time high this week and has once again exceeded that of diesel, after the 'sorpasso' that this fuel starred in last March.

However, the prices paid by consumers at the pump do not reach this record due to the mandatory discount of 20 cents approved by the Government, whose application has been in force since April 1. Despite this, the unstoppable rise in fuel prices in recent weeks has 'eaten' much of that aid.

Specifically, the average price of a liter of gasoline has chained its fourth consecutive rise after Easter and has reached a historical maximum of 1,897 euros, after a rise of 1.01%, according to data from the Petroleum Bulletin of the European Union (EU) collected by Europa Press.

In the case of diesel, it has cut its upward trend this week and has registered a decline of 1.25% in its average price, to stand at 1.887 euros per liter.

These average prices do not include the discount of at least 20 cents per liter approved by the Spanish Government and with this discount the average price would be 1,697 euros per liter in the case of gasoline, and 1,687 euros for diesel, although these data would not be entirely correct, since there are higher discounts, depending on the oil company.

Compared to a year ago, the average price of a liter of gasoline has become 40.5% more expensive, while in the case of diesel it is 56.2% more expensive, although without taking into account the discount currently in force.

These prices are recorded in an environment of constant rises in crude oil in the current context, marked by the invasion of Ukraine by Russia. Thus, the barrel of Brent, a reference in Europe, was trading this Thursday around 108 dollars, while the American Texas was exchanged at more than 106.7 dollars.

The price of fuel depends on multiple factors, such as its specific price (independent of oil), the evolution of crude oil, taxes, the cost of raw materials and logistics, and gross margins.

In this way, the evolution in the price of crude oil is not transferred directly to gasoline prices, but rather with a time lag.

With these levels, the price of unleaded gasoline of 95 is in Spain below the average of the European Union, located at 1,940 euros per liter, and of the euro zone, with an average price of 2,008 euros.

However, in the case of diesel, the price in Spain is higher than the EU average, which is 1,877 euros, although it is below that of the euro zone, with a price of 1,922 euros.

The lower level of final prices with respect to surrounding countries is due to the fact that Spain, despite VAT, higher taxes and levies on biodiesel, continues to have lower fiscal pressure, in general, than the community average.

1 I could have been born Franco-Huron! 2 Economists on alert: the slowdown in consumption and... 3 DIRECT. List Deschamps: an expanded group and surprises?... 4 The Treasury places 5,477 million in the bond auction... 5 Laia Palau, new 'Team Manager' of the women's... 6 Russia wants to cut off Ukraine from occupied Zaporizhia... 7 Ukraine: Scholz reluctant to join the EU quickly 8 Yolanda Díaz highlights that she wants to "add"... 9 Arrest in the Netherlands of three robbers with explosives 10 Two military associations resort to the age limit... 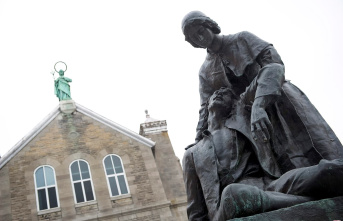 I could have been born Franco-Huron!