The physicochemical properties of colloidal motion waves in silver colloids

Recent discoveries have revealed that silver colloids can form traveling waves in hydrogen peroxide when exposed to UV light.

Recent discoveries have revealed that silver colloids can form traveling waves in hydrogen peroxide when exposed to UV light. In a new Science Advances report, Xi Chen and a group of scientists at the Harbin Institute for Technology and Shanghai Jiao Tang University in China showed that the colloidal motion wave is a heterogeneous exitable system.

Silver colloids produced traveling chemical waves via reaction diffusion. They were either self-propelled, or advected by diffusion or osmosis. The fundamental results were observed using pH and hydroxide sensitive dyes. A Rogers-McCulloch model was used to quantitatively as well as qualitatively create the distinctive features of colloidal wave. These results open the door to integrating colloidal waves to study nonlinear phenomena and to investigate colloidal transport for information transmission in biomimetic microrobot groups.

Many oscillatory processes can be observed in living systems. They range from the circadian rhythms to cytosolic oscillations. Combining oscillatory units can result in synchronization, which can give rise to traveling waves. This is evident with calcium waves spreading across fertilized eggs, action potentials propagating through beating heart cells, mitotic state, and waves self-organizing amoeba. To understand the physicsicochemical nature these waves, biophysicists seek to discover the underlying trends of life. The discovery of photochemically active silver-containing oscillating colloids is an exciting addition to this family of nonlinear processes.

Researchers observed the appearance of pulses when they immersed an inert microsphere of polymer half-coated in silver in an aqueous solution containing potassium chloride or hydrogen peroxide. The experiment resulted in the formation of silver nanoparticles that were thought to be catalytic hotspots for further reactions. Regardless of the chemical detail, the team noted how diffusion of chemicals propelled the Janus particles via self-diffusiophoresis, to give rise to similar colloidal motion. Chen and colleagues presented a first look at the creation of chemically active colloids. They also monitored their responses to chemical waves that went beyond reaction-diffusion systems. These results offer strong opportunities for translational research linking active matter to nonlinear science to regulate swarms biomimetic microscopical machines.

The team observed periodic colloidal motion waves during synchronized propagation. The team had previously observed ballistic waves at a low population density. In this case, activated colloids moved in all directions due to phoretic self-propulsion. Researchers also observed the emergence qualitatively different types waves, called swarming waves, at higher population densities. In this instance, the team developed polymethylmethacrylate microspheres half-coated with silver (PMMA-Ag), suspended in hydrogen peroxide and potassium chloride and illuminated with 365 nm light. A colloidal particle that contains silver could theoretically emit swarming waves. These experimental results were similar to the Mexican wave seen in football stadiums. The team quantified the swarming waves using single-particle tracking, micro-particle imaging velocimetry and colloidal particles as flow tracer. The wave traveled at 16 um/s with tunable parameters. The speed and duration of a swarming waves are only affected by changes in their light intensity. They were distinguished from ballistic waves by their mobility and physicochemistry.

Chen et. al. described the physicochemical basis of activation and recovery colloidal waves. The wave phenomenon is based on traveling waves in reaction diffusion systems. Chen et al hypothesized that colloidal waves could be supported by a traveling chemical waves, which they believe are caused by reaction-diffusion mechanism. Hydrogen peroxide, for example, can be decomposed faster at higher pH levels to form highly oxidative intermediates which oxidized silver to silver chloride. The silver-colloid was activated by the chemical reactivity, releasing a burst full of chemicals to keep chemical wave propagation going. Fluorescence mapping and pH measurements were used to confirm the production of silver anions and the formation hydrogen cations in silver chloride photodecomposition.

The chemical reaction of colloids to a wave: Modelling a reaction-diffusion colloidalwave

Next, the scientists studied the dynamics and formation of colloidal particles within a chemical wave. They noted ionic self-diffusiophoresis, and at higher ionic densities they noted weaker electro-kinetic effects for reduced self-propulsion. They discovered the dynamics of neutral disusio-osmosis dynamics. This allowed colloid particles to move via advection and self-propagation. The colloidal wave became a swarming wave as self-propagation decreased and diffusio osmosis increased in a crowded solution of increasing ionic strength. The experiments revealed a variety of effects including electrokinetic effects and self-propulsion. Chen and colleagues then reproduced the reaction-diffusion colloidal waves via numerical simulations, which confirmed their claims. They used the Rogers McCulloch model to simulate chemical waves. The resulting numerical models qualitatively reproduced key characteristics, which allowed them to investigate the dynamics of colloidal wave dynamics.

Xi Chen and his colleagues created a numerical model that simulates colloidal waves in order to study the heterogeneity within chemical waves. These results were in good agreement with experiments and simulations. They provide important insights into the microscopic details of chemical waveforms in experimental systems. To regulate the movement of micro- and nanoscopical objects in time and space, colloidal waves can be combined with optical tweezers, acoustofluidics and microfluidics. This method can be used to study the physicochemical dynamic of colloidal waves and to create wave-mediated information transmission systems for autonomous micro-robots. The colloidal waves are a useful model system for reaction-diffusion processes on microscopic and mesoscopic scales.

1 Axial Higgs mode - Elusive particle found in material... 2 Bumpy parts make batteries more efficient in freezing... 3 Puerto Rican Island where 1,500 monkeys rule 4 Quantum computers have shown a 'quantum advantage... 5 Formation of gap solitons within a topological 1D... 6 New insights into electron behavior are offered by... 7 The team disproves the hypotheses regarding perovskite... 8 According to reports, the Dolphins were willing to... 9 Fico Mirrors (Soria) insists that, if they do not... 10 Cebreros (Ávila) formally requests the Spanish Space... 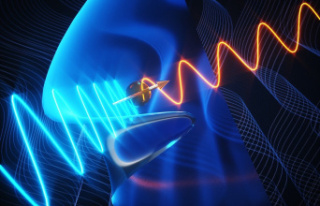