The Palencia avant-garde and Jorge Manrique

A person is their family humus, their genetic soil, their formative base and the result of an accumulation of vital and professional experiences. 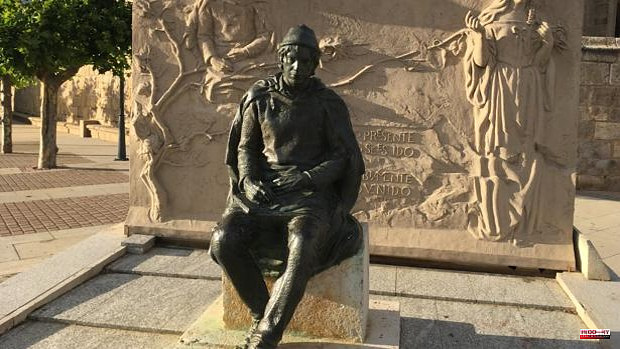 A person is their family humus, their genetic soil, their formative base and the result of an accumulation of vital and professional experiences. This is unquestionable. In all three aspects, Jorge Manrique belongs, unequivocally, to a Palencia lineage and estate, although his family and historical vicissitudes were leading his biography to the South, towards the lands of Toledo, La Mancha or Andalusia, the scenarios where he fought in his century. the battle of the formation of the first modern State.

And it is that, in addition, they are Paredes de Nava, the Tierra de Campos and the culture of Palencia as a whole, outside the borderless level of international Hispanism and the university world, permanent foci of fervor, remembrance and Manriqueño roots. Suffice it to recall recent publications and a first-rate poetry prize, as well as other projects of wide national and international significance, still in gestation.

Often, this Manriquean fervor is generated from the perspective of the most traditional and academic culture. But, also, from the most innovative and avant-garde. Today, with these lines, we want to highlight this other line of approximation, recovery and updating of perhaps the greatest of our classics and, at the same time, the most modern due to its unfading timeliness and validity.

Gabino Alejandro Carriedo is recognized as one of the great poets of the Spanish 20th century. He is associated with the second wave of Postism (that avant-garde that he refused even the lexeme, naming himself as a prefix and a suffix), social poetry and magical realism. The linguistic and conceptual game, humor, acidity and criticism are his constants. As in the best of Postismo (Chicharro, Ory), the man from Palencia liked to play not only with free verse, its rhythms and associations of ideas, but also with traditional forms (romance, sonnet), boasting of being one of the best sonnetists of his promotion.

Santiago Amón, who also started out as a poet and became one of the great references of art criticism in his time, maintained a constant and deep friendship with Carriedo, until the end of his life, presenting in Madrid his last great caption 'New Compound, Old Decompose'. One of Amón's most celebrated books was his biographical study of Picasso. Both, then, can and should be considered important contributions from Palencia to the Spanish avant-gardes of the mid-twentieth century.

I am going to bring up the article From Manrique to Carriedo, signed by Amón and published on ABC (09/30/1981) on the occasion of the death of Gabino Alejandro Carriedo. The theme of death, it would be said, gives way to Manrique's semblance. But the fresh depth of this column, which evokes Bergson and César Vallejo and underlines Carriedo's deep roots in Manrique but also that of Amón himself, transcends clichés and makes a brief summary of the brilliant space-time perception of the author of the Coplas. «Manriqueño and Vallejo, writes Amón, was Gabino-Alejandro Carriedo; that if he related to Manrique in peasantry and reflection on death in life, he was not a little related to Vallejo in the ease of colloquial language. Carriedo was from Palencia, an assiduous listener, as he complies, of the Manriqueño proclamation (from memory, not being very faithful to him, he knew and boasted of saying the Coplas from end to end") and translator, in the Vallejo way, of his immortal message (even going through death). From one he inherited the lasting feeling of his chronicle, and from the other the renewed version in a Roman paladin, which he managed to water with the good wine of humor. He made his own, with both, the vital memory of his own end and, foreseeing his own death and that of his neighbor, he ironically left written: 'Any day we can appear in the newspapers' ».”

Here the friend and critic points out two pillars of carriedian poetics: their common countryman Manrique (classic canon among the classics where they exist) and an egregious reference of the Latin American avant-garde without borders, a synthesis of ancestral autochthonous roots, Spanish literature and French surrealism. The "endearingly Manriqueño César Vallejo", in the words of the Palentino critic, from whom he quotes some verses: "I will die in Paris in a downpour / a day I already remember." These are verses that certify the great influence on contemporary poetry of the Coplas and the songbook of Don Jorge. From Vallejo a Manriqueño breath came to Gabino but, in addition, so to speak, the latter had already sucked him in his origins and formative years in Palencia. Using an arithmetical image, Gabino, according to Amón, would be Manriqueño squared, with the endearing fact that he knew and recited the Coplas "from end to end."

The transcribed paragraph, which underlines the colloquialism shared by Manrique with the two poets of the 20th century, picks up candles from previous ones about the prescient modernity of Manrique's discourse, which swaps medieval spatiality for contemporary temporality, in an elegy that opens and it closes with the concept of remembering (remember/memory). When Manrique develops the ubi sunt, his question does not refer to the place where the missing characters he evokes may be, but rather what or how time undid them and only his verse recalls them: «In Jorge Manrique's Coplas, say whatever the scholar says, to remember means, literally, to remember; entrust to the rare faculty of memory both the past and the present and the things to come. In the literal meaning of the Manriqueño term, and in its daring extension to what was, what is and what will be, is given, without a doubt, the key to the enigma that makes his elegy outstanding above a thousand others, whose parity of origin was far from bringing them to such fame or to such a degree of dissemination and survival: the decided supplanting of being by happening, the premeditated substitution of space for time, that is (and in accordance with Bergson's astute warning), the strictly accommodate life to its own temporal discourse, to its essential duration.

After this accurate exposition of the Manriquean singularity, which makes his elegy the summit and indelible monument of our Literature, Amón closes his lucid approach to the author of the Coplas, pointing out his advanced perception of time in terms of an almost magical circularity: «Si una If a single stanza had the clear virtue of underlining the character of event (and event is temporality) that Jorge Manrique imprints on his Coplas, the following fraction should not seem inappropriate: «And then we see what is present / how at one point it is gone / and finished, / if we judge wisely, / we will take what has not come / for past». The memory of two absences at one point (the present - the existentialist voice will emphasize - is a spark between two nothings) and the colossal gerund of time all around. Remember the future too? Yes, to take what has not come for past, to remember what will happen».

Another great name from Palencia from the avant-garde, in this case from the plastic arts, the sculptor Victorio Macho, evokes in his Memoirs how he climbed to the top of the Celtiberian-Roman moor (Intercacia) dominated by Paredes, feeling identified with the love longings and setbacks of Young Manrique on one of his visits to his father's estate and his sadly disappeared citadel (like so many others of his time).

Carriedo's extremely high esteem for Jorge Manrique is made explicit in his apocryphal autobiography La flor del humo, composed by his biographer and exegete Amador Palacios and which deserves its own article. Speaking of the contrast between Andalusian art and the Castilian plateau, he declares: «Next, I oppose the art of Murillo to that of El Greco, that of Herrera to that of Fray Luis, ending with the supreme example, on the Castilian side, of the poetry of our Jorge, naturally Jorge Manrique, who points out with his dry and wrinkled ascetic finger the danger and haste of our hours».

Jorge Manrique heads the canon of Spanish lyric poetry since the fifteenth century. His verses continue to illuminate, comfort and speak to the hearts of men and women of all times, latitudes and circumstances, and his influence radiates not only to more traditional writers and critics but also to very transgressive authors and only apparently far from their budgets (Antonio Machado , Pedro Salinas, Rafael Alberti, García Lorca, León Felipe, Blas de Otero, Guy Debord) and, of course, the two great Palencia avant-garde artists that we have mentioned in this article, Santiago Amón and Gabino Alejandro Carriedo.

Antonio Lázaro, doctor in Spanish Philology, is a writer and literary researcher. He has published novels such as Club Lovecraft and Memorias de un hombre de palo, literary tourism guides (Guía del Triángulo manriqueño) and a modernized version of Coplas de Manrique illustrated by Antonio Santos (Nórdica, 2020). Collaborator as a cultural journalist in written and audiovisual media (ABC, Cope, CMM, Radio Exterior, Radio 5, etc.). Currently, he is preparing a novel about the final days of Jorge Manrique and the gestation of his famous Coplas.

1 The Board plans to rehabilitate more than 6,700 homes... 2 Who was Kanamat Bothasev? Highest-ranking commander... 3 Final Partygate Report Holds Johnson Government Leaders... 4 The Xunta gives the green light to more than 10,000... 5 2022 Finnish Grand Prix canceled 6 Google opens its 'cloud' region in Madrid... 7 The Barcelona City Council will present a complaint... 8 The IVAM presents an exhibition by Mar Arza that reflects... 9 Albares sees the possibility of "unraveling"... 10 Experts in animal translocation warn that "there... 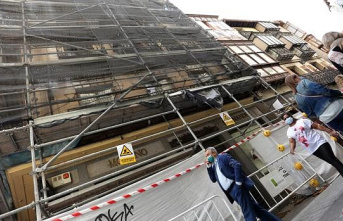 The Board plans to rehabilitate more than 6,700 homes...