The opening of CaixaForum Valencia plans to double visits to the City of Arts and Sciences, a "national and international benchmark in cultural tourism, sustainability and scientific dissemination" that "consolidates" the commitment of the Valencian Community to this "pole of attraction tourism and investors. 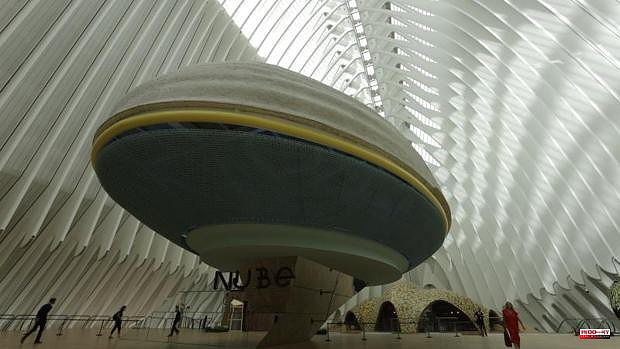 The opening of CaixaForum Valencia plans to double visits to the City of Arts and Sciences, a "national and international benchmark in cultural tourism, sustainability and scientific dissemination" that "consolidates" the commitment of the Valencian Community to this "pole of attraction tourism and investors.

The City of Arts and Sciences exceeds the sale of 1.2 million tickets in the first six months of the year alone, and hopes to double these figures by the end of 2022, as reported by the Generalitat in a statement.

The general director of CAC, Antonio Torres, has highlighted that the opening of CaixaForum Valencia is "one more step in the consolidation of the City of Arts and Sciences as one of the most attractive poles not only in terms of tourism but also economically" .

Specifically, the City of Arts and Sciences received 1,103,977 visitors from January to June 21, most of them from Italy, France, Germany and the United Kingdom. Regarding visitors of national origin, the public from the Community of Madrid, Catalonia and Murcia stands out.

The influx of buildings, from January to June 21, 2022, is led by the Hemisfèric with 156,998 spectators, followed by the Museu de les Ciències which has sold a total of 332,327 tickets, while the Oceanogràfic, meanwhile, has recorded 614,652 sales , which means a total of 1,098,610 tickets sold. The Palau de les Arts has had more than 109,000 visitors including spectators, event attendees and guided tours.

Antonio Torres has assessed these figures and has highlighted that the complex is "a benchmark in cultural tourism." In addition, he highlighted "the large influx of people who have attended different concerts and events in the City of Arts and Sciences, including music festivals and Berklee concerts, with almost 120,000 attendees."

At the same time, within the commitment to the use of sustainability and renewable energies, one of the main objectives of the strategic plan of the City of Arts and Sciences is to turn the complex into a "national and international benchmark in sustainability, for all levels, leading sustainable development and being an example of bioclimatic architecture».

Along these lines, it has opted to transform the Museum into a green building, with bioclimatic architecture, by installing photovoltaic panels and improving air conditioning and lighting, so that they are more efficient. In the exterior overhangs, it is planned to install 4,000 solar panels that will occupy an area of ​​more than 2,500 square meters.

In addition, the program under development to maximize water efficiency, waste recycling, as well as the remodeling of the third floor of the Museu de les Ciències, which will be dedicated to environmental dissemination exhibitions.

Within the Consell's commitment to sustainable mobility, there is also the Metrovalencia L-10. During the first month of commissioning, nearly 110,000 people have traveled. Alacant, together with the City of Arts and Sciences station, are the main stations in number of users.

The Sunday free metro and tram has registered a significant increase in journeys on the L10, with an average of 3,546 people per day. In the last two Sundays it has moved more than 7,000 a day, twice as many as on the first Sundays when the line started up.

Looking ahead to this summer, the Museu de les Ciències is expanding its hours and activities such as the 'Science on Stage' workshops, including the new 'SOS Planeta' experiences dedicated to education in renewable energy and climate change.

Among its novelties, the new exhibition 'Viral' stands out, an exhibition on the power of science through 25 modules where the phenomenon of contagion in biology, epidemiology and public health, network science, psychology and social sciences is addressed. Another proposal is the Science Theater, where the play 'Ramona y Cajal. The secret of the Museum', the only scientific musical on stage.

Starting in July, the Hemisfèric renews its billboard with the movie 'Flying Monsters 3D' and the live planetarium 'Las Nocturnas de Verano', special sessions that explain what the sky looks like on summer nights and in which you learn to distinguish the most representative constellations of the summer sky, among other curiosities. The film 'Oceans: our blue planet' is also screened, which takes the public to the underwater world and discovers its extraordinary biodiversity from the frozen coasts of the Arctic to the warm waters of the tropics is another of the Hemisfèric's proposals.

1 They arrest 32 people and investigate another 49 for... 2 Five arrested for paying a minor in exchange for sending... 3 They are looking for two men for raping an Irish tourist... 4 Sánchez announces reductions in transport and an... 5 Several NGOs raise the dead to 27 in the attempt to... 6 Mazón defends a "greater freedom" to "improve... 7 The young man stabbed when defending a minor from... 8 Page: «The approved transfer is double what it will... 9 They dismantle several drug sales points in the Casitas... 10 2022 work calendar in Valencia: when is the next holiday... They arrest 32 people and investigate another 49 for...