The oldest book in Galicia leaves the vault of the USC

In the last 20 years it had been kept in a vault of the American Library of the University of Santiago. 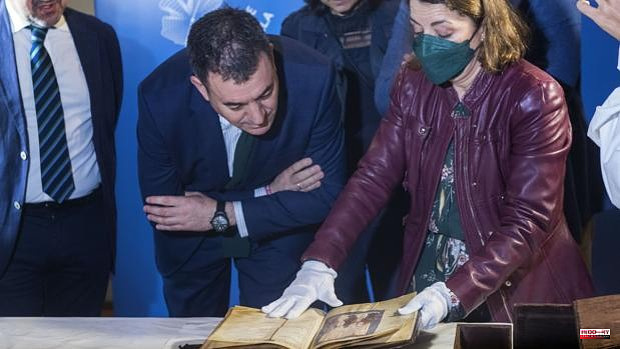 In the last 20 years it had been kept in a vault of the American Library of the University of Santiago. But this morning the 'Book of Hours of Fernando I', the oldest copy preserved in Galicia, abandoned it. Dated to 1055, the specimen was commissioned for her husband by Queen Sancha. Starting tomorrow, it can be seen by the public in the exhibition 'Santiago de Compostela no tempo', which opens at the Afundación headquarters, on Rúa do Vilar.

The Minister of Culture, Román Rodríguez, and the managing director of Afundación, Pedro Otero, as well as the rector of the USC, Antonio López, attended the transfer of one of the most valuable pieces of Galician bibliographical heritage, even older than the famous Codex Calixtinus, from the 12th century.

There haven't been many opportunities to see the book for the general public. The director of the University Library, María Isabel Casal, and the exhibition's curator, Manuel Gago, explained that the last time it was possible was with an exhibition organized by the Spanish university libraries in the year 2000, on the premises of the Pazo de Fonseca. In the 1980s she traveled to New York to take part in another exhibition project. For conservation reasons, their stay at the Afundación headquarters will be limited to one month. After this period it will be replaced by a facsimile until the end of the exhibition 'Santiago de Compostela no Tempo', in September.

The 'Book of Hours' of Fernando I was commissioned by Queen Sancha as a gift for her husband, Fernando I of Castile, within the framework of a strategy to legitimize their rights, questioned by the aristocracy. The 226-page manuscript contains liturgical and musical texts and rich illumination, including a scene where the queen orders the scribe to deliver the book to her consort. According to Manuel Gago, curator of the exhibition, it is one of the first testimonies of Romanesque formal language and private medieval spirituality. The book was part of the Compostela monastery of San Martín Pinario, but was incorporated into the University of Santiago after the Disentailment of 1835.

Now it can be seen in the exhibition 'Santiago de Compostela no tempo', the first of the seven exhibitions of 'Cidades no tempo'. The project will delve into the culture and identity of each of the seven Galician cities. The exhibition is organized by the Xunta, through the Cidade da Cultura Foundation, and by the Obra Social de Abanca, Afundación.

1 Von der Leyen announces in Warsaw the release of European... 2 “We are going to kill you”: Moroccans are convicted... 3 The specialist in 'simpas' from Valladolid... 4 The schooner 'Atyla' gains strength in Vigo... 5 Zamora welcomes the rugby players of the Iberdrola... 6 Corruption spills over into a socialist pedáneo alcalde... 7 The black smoke from his car betrays an alleged drug... 8 The strongest men in Spain meet in Torrijos this Saturday 9 An undocumented caregiver exploited by the Lugo company:... 10 Bankinter strengthens its 'Next Generation EU'... 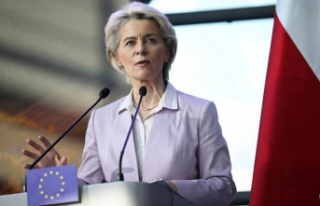 Von der Leyen announces in Warsaw the release of European...