The Netón of the 'green berets' or the Pilatus plane, novelties in the Armed Forces Day parade

The King and Queen presided over this Saturday the tribute of the city of Huesca to the military for the Day of the Armed Forces, whose central act, with a land and air military parade, had not been held since 2019 due to the pandemic. 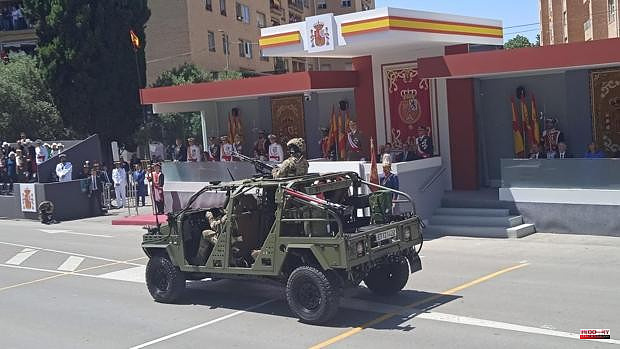 The King and Queen presided over this Saturday the tribute of the city of Huesca to the military for the Day of the Armed Forces, whose central act, with a land and air military parade, had not been held since 2019 due to the pandemic.

Cheers to the King, the Armed Forces and Spain, the citizens welcomed the parade on Juan XXIII Avenue, along which 3,279 soldiers paraded. On this occasion, Felipe VI chose the uniform of Captain General of the Land, given the harmony of this Army with the province of Huesca.

The most emotional moments of the act were experienced in the act of raising and paying homage to the national flag, which was brought in a paratrooper jump, and the subsequent memory of those who gave their lives for Spain, with the lyrics of the song 'La muerte It is not the end'.

After this tribute and coinciding with the end of the prayer call, the Eagle Patrol made a first pass dyeing the blue Huesca sky red and yellow.

On this occasion, the Day of the Armed Forces, whose last parade was held in Seville in 2019, has as its motto "40 years of active participation in NATO", since Monday marks the fortieth anniversary of Spanish accession to the Alliance Atlantic.

In addition to Don Felipe and Doña Letizia, this act in Huesca was attended by the Ministers of Defense, Interior and Education -Margarita Robles, Fernando Grande Marlaska and Pilar Alegría-, the Chief of Defense Staff, Admiral Teodoro E. López Calderón, and the rest of the military leadership with the chiefs of the Army, Army and Air Force.

It should be noted that, unlike the Military Easter or the military parade on October 12, the President of the Government does not usually attend this Armed Forces Day event. Yes, there was the Aragonese president, Javier Lambán, or the new director of the CNI, Esperanza Casteleiro.

In the air parade, 45 planes and 24 helicopters could be seen, highlighting as usual the Eurofighter and F-18 fighters, the Chinook helicopters, the mammoth A400M military transport planes, the Group 43 firefighting aircraft or the Pilatus PC- twenty-one. The latter has been one of the novelties of the air parade this year.

The Pilatus entered service last year in the Spanish Air Force. Future pilots of the Air Force are trained with it. This Swiss-made aircraft replaced the veteran C-101.

As usual, the land parade, commanded by the chief general of the 'Aragón' Brigade I, Javier Mur from Huesca, had a varied representation of the units of the Army of the Land and Air, the Spanish Navy, the Unit Emergency Military and the Civil Guard.

In the motorized part, they highlighted the presence of Leopard combat tanks, self-propelled howitzers, Pizarro armored vehicles, UME snowplows, the 'Husky' mine detection vehicle or the new light vehicle of the Special Operations Command, known as Neton.

The Netón, from the Einsa company, which has been one of the stars of the land parade, takes its name from the ancient Hispanic god of war and lord of lightning, it is designed from the chassis of one of the most widespread vehicles in the world , the Toyota Hilux pick-up.

The parade on foot gave way to the units with groups from the Navy, the Air Force, the Civil Guard and the Army in this order. The Legion and its goat also parading with a fast step, the Regulars with the elegant slow step or a company of 'Pyrenees' Mountain Hunters, carrying their skis on their backs, were some of the most characteristic units.

The Armed Forces Day aims to "pay homage to the Armies and promote their knowledge and integration into Spanish society", the origin of the celebration when it was approved by Royal Decree in 1978. The festival changed in 1987 with the purpose of expanding the resonance of the ephemeris.

During this week more than two hundred military events, open days, concerts, conferences... have been scheduled in all the Autonomous Communities. Also in the contingents of the missions abroad.

1 Mazón: «The left is incapable of understanding that... 2 Paula Prado, one year after the municipal ones: "Every... 3 The families of Villa de Pitanxo will sue the boss,... 4 Spain will send 100 more soldiers to Latvia with the... 5 Streets closed and EMT lines diverted in Valencia... 6 Champions League: Liverpool – Real Madrid, an ever-enduring... 7 Dordogne: A singing workshop around "My Fair... 8 Saint-Porchaire is always available for the Food Bank... 9 Puente believes that García-Gallardo can come out... 10 The referee of the Champions League final will be... 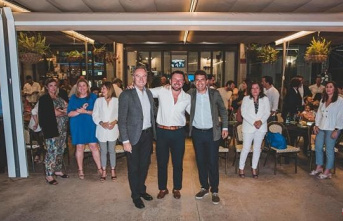 Mazón: «The left is incapable of understanding that...