The National Rifle Convention begins: "The problem is not weapons, evil always finds a way" 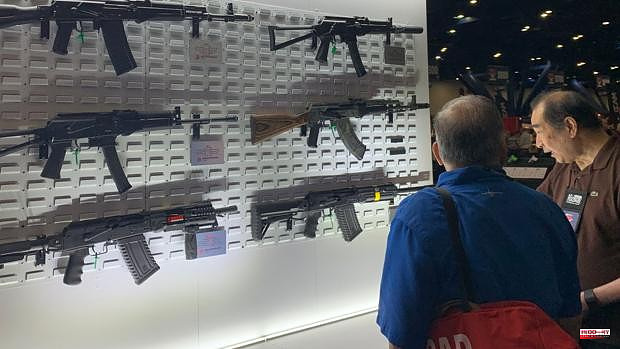 Just five hours of highway, flat fields of cultivated fields and signs of fast food restaurants separate Uvalde, Texas, from Houston, the main city of the state. There were the crosses planted in the Plaza del Ayuntamiento, with the names of the 19 children and their two teachers who died in the massacre last Tuesday, covered with flowers, memories and messages. "I will never forget you, sister," said one, in childish handwriting.

Here, in Houston, in a glittering convention center, the National Rifle Association (NRA), the great gun lobby in the US, was celebrating its annual conclave. It has only been three days since that Salvador Ramos sprayed bullets into an elementary school class with a military-style rifle purchased a few days earlier, just after his 18th birthday, at a hunting store.

Shock over the tragedy overshadowed the NRA meeting. The annual appointment was scheduled months ago, but the coincidence with the massacre made it, for some, an insult to the victims and their families. The NRA and other groups in favor of not limiting access to weapons, a right enshrined in the US Constitution, are the ones who pressure political representatives so that there are no changes that would prevent someone like Ramos - a teenager with obvious mental health and sociability problems - get hold of a deadly rifle.

"Guns are not guilty of anything," said Joe Wylie, a member of the NRA, near the door of the convention, which this year did not even accept the request for credentials from the foreign press. “If I decide to run you over with my car, do we close the Ford? I can kill whoever I want with anything if I want. Give me a saw and cut down a tree so that it falls on you.” Why does this happen in the US so much more than in any other country? “It happens in other ways in other places. Look at Ukraine.

Wylie sees responsibility for the tragedy outside of the rifle Ramos was carrying. “The school had a side entrance and no protection. It should have only one entrance and with security, ”he defended in a speech that Ted Cruz, a Republican senator from Texas and a staunch defender of the right to bear arms without limits, and who planned to give a speech at the convention, has repeated ad nauseam.

Some changed their minds. For example, the governor of the state, Greg Abbott, also a Republican and also pro-gun. He claimed that he planned to attend a press conference in Uvalde to be absent in person, although he did send a video to the convention. Also withdrawn at the last moment were the deputy of the Government of Texas, Dan Patrick; the other state senator, John Cornyn, also a Republican; well-known deputies such as Dan Crenshaw and several country stars who planned to participate in a concert organized by the NRA. Among them, Lee Greenwood, the author of 'God Bless the USA' ('God bless the USA'), a song that is not missing in all Donald Trump rallies.

The former president is the highlight of the pro-gun conclave. Many of the attendees wore T-shirts and hats with his name on them. Among them, Michael D. (he did not want to give his full last name), who had traveled from New Jersey, a very restrictive state with weapons. "If there had been an armed person in that school, a teacher or a security officer, it would have been another story," he said. "I have the right to protect myself, myself and my family, the Constitution gives me that inalienable right," he continued. “No one is going to take our weapons away from us.”

A road and two rows of fences separated the NRA meeting attendees from dozens of protesters. "Shame on you! assassins! throw them out with the votes!” they chanted. On their banners were slogans such as 'Protect children, not guns', 'Enough is enough', 'Abbot counts bills while we count bodies' or 'Keep blood money out of politics', referring to contributions from pro-gun groups, especially the NRA, to political campaigns.

"The problem is not weapons, evil always finds a way," said Michael D., referring to attacks with vehicles or pressure cookers. However, he recognized that more could be done in reviews when buying large caliber weapons. It is something that many residents of Uvalde are asking for these days: that the weapons do not reach the wrong hands. “We should have a better way to do it, to control it,” he pointed out, in an opinion that tends to gain support after the periodic massacres suffered by the US and whose momentum loses strength like soda.

It was something that Darryl Miller, who runs a gun store near Houston, also agreed with. He arrived at the convention "very sad" because of what happened in Uvalde and understood those protesting from the other side of the sidewalk. "But I also want to defend our freedoms, our constitutional rights and everything that has to do with America," he said. The problem, in his opinion, is "the mental health and family crisis" that the country is suffering. It requires "two-party" solutions and agreements. Something that seems impossible today.

1 Avignon. Vaucluse social worker called to strike 2 For a poisoner who has been convicted of attempted... 3 MotoGP. Italian GP Tests: Johann Zarco falls twice... 4 Haute-Savoie. A missing person from Pringy was found... 5 Annecy. Haute-Savoie : He degrades a car that is parked... 6 European challenge: The LOU climbs Toulon to claim... 7 Montmelian. Savoie is a person who drives a car and... 8 The Morning. Monkeypox is rapidly approaching our... 9 Saint-Paul-les-Romans. Drome: An octogenarian in absolute... 10 Saint-Rambert-d'Albon. Drome: More than 1,000... 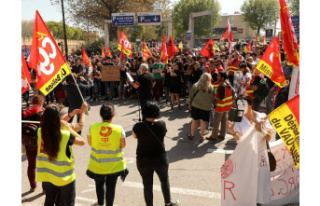