The National Police tries to locate the ten most wanted fugitives, who could be in Spain

The National Police has launched a campaign to locate ten fugitives wanted by different national and international courts. 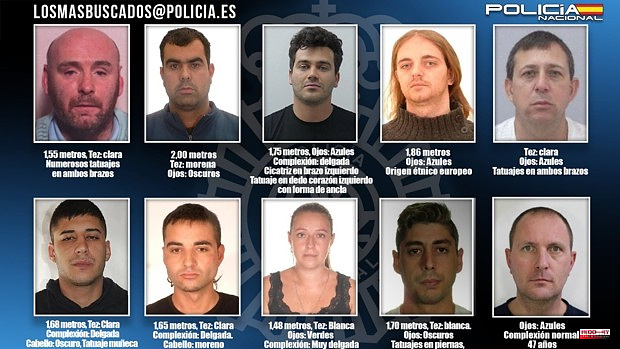 The National Police has launched a campaign to locate ten fugitives wanted by different national and international courts. Fugitives with different criminal profiles have been included in the most wanted list, some of them wanted and captured for more than 15 years, and who could be hiding in Spain.

In 2021 alone, the Fugitive Section has participated in the arrest of 417 fugitives from justice and since 2017 the number of arrests for different national and international claims amounts to 2,272. In recent months, several of the international fugitives in search and capture have been located in the Canary Islands.

In 2022, Spain leads the European Network of Fugitive Active Search Teams, ENFAST, available 24 hours a day, seven days a week, to undertake immediate actions aimed at locating and arresting fugitives, made up of police officers of the 27 countries of the European Union and other associated countries such as the United States, Switzerland or Norway.

Derek McGraw Ferguson is wanted for felony murder. He is the alleged murderer of a waiter who died in June 2007 from a shot to the chest in the parking lot of the tavern where he worked, in the British town of Glasgow. The patrons of the bar raised the alarm, but he died on arrival at the hospital. Investigators believe the two people waiting for the waiter in the car park were Derek McGraw Ferguson and another man whose body was found weeks later in an oil drum in the River Clyde. The agents are also investigating Derek for this matter. The fugitive is 1.55 meters tall, has fair skin and marked alopecia, although he could have received a hair implant or wear a wig. In addition, he is missing part of his left ear, which could have been touched up through plastic surgery. In his day he sported several tattoos on his left arm: a heart, an arrow and a dagger. He is dangerous and can be found armed. He is 58 years old.

Diego Darío González Ghersi, 40, is wanted for alleged sexual abuse committed against his own minor daughter. The girl's mother stated that she realized that the minor, on many occasions, consulted web pages of sexual contact (rape of minors, pornography...). In addition, she noticed that she always came back sad and downcast from scheduled visits to her father, so she began to suspect that something might be wrong. After observing this situation, the minor's mother asked her on several occasions the reason for this situation and, although at first the minor refused to state her reasons, she finally let it be known that, for five years, she had suffered abuses. In addition, he stated that her father had warned him that what was happening between them was a secret that he should not tell anyone, going so far as to show him a kind of "pact of silence" with his fingers with which to strengthen that secrecy that the minor should keep. The fugitive is 1.70 meters tall and has dark eyes. He has tattoos on both legs, on both arms and also on his back. He could wear an earring on his left eyebrow.

Viviana Andrea Vallejo Gutiérrez facilitated the arrival of women in Spain, charging them a debt that they had to pay by engaging in prostitution. She ran several houses dedicated to it, and trafficked cocaine in those same homes. Her profits were laundered through wire transfers and money transfers. Vallejo Gutiérrez is characterized by a nonexistent human empathy. Her actions have caused irreparable damage to many families of various nationalities, making her an international criminal of high danger. She is 1.48, very thin and has green eyes. She is 36 years old and is easy to identify thanks to a mole between her nose and lip, located on her left side, a strong Galician accent and very well-groomed hands.

Manuel Herrero Muñoz, along with another person, allegedly murdered a man in Mexico City by attacking him with a cutting instrument that caused neck injuries and cervical and chest trauma. Later he hid his body in a warehouse located in the same building, inside a drum that they filled with cement. It is about a person who usually causes problems in his daily life, being able to take the life of another person without remorse. He is 33 years old, 1.75 meters tall and has a slim build. His hair is brown and he has very light blue eyes. He has a surgical scar on his left arm and a tattoo of an anchor on his left middle finger. He speaks English perfectly.

Norbert Kohler is 44 years old. On August 30, 2017, he was in possession of 212 kilograms of cocaine in the Madrid town of Majadahonda. He is also being investigated for money laundering related to drug trafficking. In addition, during the years 2000 and 2001 he participated in nine robbery cases as a member of a gang in the Czech Republic. In some of these cases, he pretended to be part of a police patrol, thus stopping the victims on the road, who were kidnapped in a van to take them to the vacation home of one of the members of the group or to another place where they were held and tortured until the victims gave them the keys to the safes, the keys to the house, the access codes, the credit cards with their key, the cash, the vehicles and other objects of value. The fugitive is 1.86 meters tall, has light blue eyes and is considered highly dangerous. He can be armed.

Luis Martínez Calleja is a well-known criminal specializing in moon landings. On March 9, 2014, when he was an inmate at the Madrid I Penitentiary Center (Alcalá Meco), he escaped taking advantage of a transfer to the Alcalá de Henares hospital. He has innumerable legal claims for the commission of numerous moon landings and all kinds of high-profile robberies with force. He is extremely aggressive in the presence of the police, attacking the agents on numerous occasions. He is 29 years old, 1.68 meters tall and has dark hair. He sports tattoos on both his left and right wrist. He draws attention to his scar on his upper lip.

Nikolay Shterev Kurkuchev, 53, is the alleged leader of an international organization dedicated to trafficking large amounts of narcotic substances through containers from South America to Europe. It is a perfectly structured organization made up of mainly Colombian, Bulgarian and Spanish individuals, dedicated to the introduction of large amounts of cocaine into Spain and the rest of Europe, using maritime containers sent from Colombia under the guise of commercial transactions. legal. The fugitive would be the head of the organization in Bulgaria and the person who received the cocaine in that country. He has the necessary contacts in Greece and Bulgaria to receive the containers loaded with cocaine, as well as the necessary infrastructure to separate the drug from the rest of the merchandise. He has numerous tattoos on both arms, fair skin, and blue eyes. He is dangerous and can be found armed.

Ramón Saavedra López is accused of intentional homicide. Along with other people, he went to the home of his boss because he had not paid her 200 euros. When the victim was about to enter his house, the defendants, covered in balaclavas and gloves, pushed him inside. One of them pressed him with force at the height of the neck causing the occlusion and causing his death by suffocation, according to the statement from the Public Prosecutor's Office. After her, they went to the room where the mother of the deceased was, tied her with some bridles and shook her and beat her to seize the 50 euros that she was carrying in her robe. The fugitive is 38 years old, dangerous and responds extremely aggressively to stressful situations. He is characterized by a special elusive and evasive ability. He is 1.65 meters tall and has brown hair.

Manuel Bellido Moreno was sentenced in a final judgment to a sentence of nine years in prison for the crime of issuing and distributing counterfeit currency. He is considered the largest currency counterfeiter in Spain, and is accused of being a member of a criminal organization dedicated to counterfeiting high value bills, where Bellido would have as main function the distribution of counterfeit currency throughout Spain during the year 2013. He has 46 years old, he is two meters tall and both his skin and his eyes are brown. He has easy access to items to forge documentation, credit cards and traveler's checks, among others, which makes it difficult to identify him.

Tom Michielsen Tom Richard Diane Michielsen can use other names such as Vermeiren or Heinrich Schmidt, she is 46 years old and of Belgian origin. He is allegedly involved in crimes related to drug trafficking, money laundering and arms trafficking. He is considered a dangerous fugitive as he could be in possession of firearms. He is of normal build and has blue eyes.

1 Lot-et-Garonne - A high school student falls ten metres... 2 The oil companies Galp and Total will invest almost... 3 Germany will change its constitution in order to strengthen... 4 The PNV would win again in the three Basque capitals... 5 Two dead after their car fell down a slope in Pradell... 6 The accused of strangling his mother in July 2020... 7 Nearly 600 cultural activities in regional centers 8 Felipe VI claims "our exemplary Transition"... 9 Riera (CUP) accuses the Government of having abandoned... 10 Air Nostrum seeks cabin crew this Wednesday in Valencia 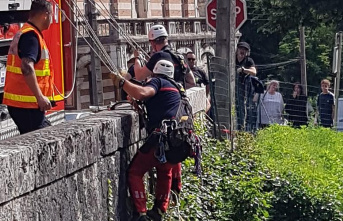