The legalization of repression in Cuba

A new Libertarian Penal Code (CP) that legitimizes the repression against opponents and civil society actors was approved by the National Assembly of People's Power of Cuba on May 15. 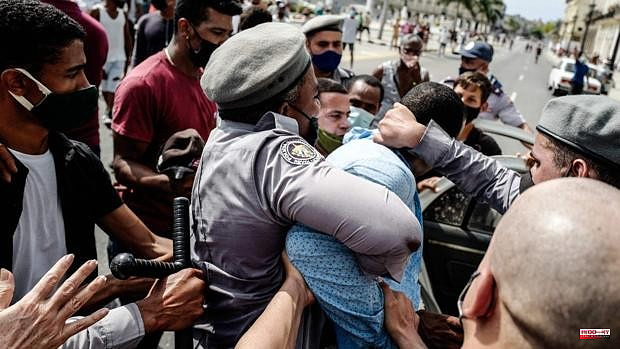 A new Libertarian Penal Code (CP) that legitimizes the repression against opponents and civil society actors was approved by the National Assembly of People's Power of Cuba on May 15. Through this, “the repressive apparatus may imprison even for exercising constitutional rights. The ways to repress and persecute citizens are being reinforced,” the Cuban Human Rights Observatory (OCDH) denounced this week, just a few days after a new criminal code (CP) was approved by the Cuban regime.

Along the same lines, the Inter-American Commission on Human Rights (IACHR) has expressed its concern about criminal types that could be used to criminalize the legitimate exercise of freedoms of expression, assembly and association in Cuba from the entry into force of the new CP.

For the agency, this "maintains a broad and imprecise language to classify crimes such as sedition and against the constitutional order and intensifies penalties related to them such as life imprisonment and death."

In the opinion of the Cuban lawyer Eloy Viera Cañibe, it is a CP “worse than the previous one and that responds to a thriving and diverse civil society; it comes to legalize forms of repressing civil society », he declares to ABC.

The new norm confirms that the Communist Party (PCC) is above citizenship and even the Constitution itself, protects those followers who participate in actions -even violent- against dissidents, and shields Castroism and its institutions against popular discontent , which is why it represents a setback in terms of human rights and a perpetuation of the dictatorial system.

The previous CP dated from 1987. The update comes after a period of constant social protests on the island against norms and practices that violate human rights, such as those that occurred on November 27, 2020 and January 27, 2021 in front of the Ministry of Culture of Cuba and carried out fundamentally by artists and intellectuals; as well as the massive protests of July 11 (11-J) 2021.

The new CP classifies 37 new crimes related, for example, to telecommunications, so that censorship and the commission of crimes extends to social networks, that space that, since the arrival of mobile internet in 2018, has contributed to mobilize to civil society and to generate spaces for debate, social complaints and criticism of power.

The requirement of criminal responsibility is maintained from the age of 16, the maximum penalty is life imprisonment and the death penalty exceptionally in the case of 23 criminal types, three more than the previous CP.

Similarly, it normalizes acts of repudiation, exempting those who implement them from criminal liability, since they act "in legitimate defense" to prevent "an imminent or actual danger or damage to public peace or to the State's property or social interests." It also eliminates any possibility of charging those individuals for injuries; In this way, it also legalizes physical attacks against peaceful protesters against the regime, as happened on 11-J, when the "revolutionaries", at the call of Díaz-Canel, responded with sticks and stones. In case of defending themselves against aggression, those violated may incur an aggravated crime.

For Viera Cañibe, the most dangerous thing about the new CP is that it legitimizes a group of practices that had been handled in the Cuban political reality but outside the law; for example, article 143 establishes the sanction of between 4 and 10 years of deprivation of liberty for citizens who, "by themselves or on behalf of non-governmental organizations, international institutions, associative forms or any natural or legal person of the country or of a foreign State, supports, encourages, finances, provides, receives or has in its possession funds, material or financial resources, with the purpose of defraying activities against the State and its constitutional order.”

This "is nothing other than the legalization of political discourse around mercenarism, which had labeled as illegal conduct that was not classified as such in the Penal Code, such as independent journalism and political dissent," explains the lawyer.

Another of the most dangerous aspects of the norm is the inclusion, in the definition of the crime of "public disorder", of carrying out "provocative" acts on public roads. For Eloy Viera, everything that power considers or interprets would enter there, whether it be a peaceful protest or a post on social networks that seek to provoke something in the rest, and "politics, in itself, is provocative." Those who commit this crime can be sentenced to between three and eight years in prison for obstructing public roads or for "invading" facilities or buildings.

Similarly, the "promoters, organizers or directors of an association not authorized to be constituted," that is, all minimally dissident civil society organizations or political parties, which the regime refuses to acknowledge and that, to date, they had operated under the harassment of State Security but without it constituting a contravention.

The new CP will enter into force 90 days after its publication in the Official Gazette of the Republic. Viera Cañibe, a Cuban lawyer living in exile, believes that it will be used early to try to suffocate what remains of civil society articulated in Cuba.

The United States Embassy in Havana condemned the approval of the new CP on the grounds that it “further restricts freedom of expression, of the press, and of assembly. (…) While increasing the penalties for legitimate and peaceful protests, the new Code reduces criminal sanctions for those who violently repress future protests».

However, just one day after its approval, the Biden administration unveiled a package of measures that represent a step back from several of former President Donald Trump's policies. The rapprochement measures, right in the midst of the resurgence of repression, have been rejected by dozens of Cubans inside and outside the island.

The new CP is also approved after the Cuban State went through, for the first time in several years, serious reviews in the Committee against Torture and the UN Committee on the Rights of the Child. The first of these organizations issued its periodic report with recommendations to Cuba. Similarly, the island is experiencing one of the worst repressive contexts in recent decades, with at least 1,015 prisoners, most of them after 11-J.

1 The Government of Peru apologizes for the 1985 Accomarca... 2 The Government maneuvers to save the public pension... 3 The list of Spanish businessmen and politicians who... 4 The warning from the Bank of Spain so that the Treasury... 5 Rakuten challenges Amazon and launches a 30% cash... 6 Lagarde points to July for the first rate hike and... 7 Two out of three self-employed plan to raise their... 8 1,000 waiters and cooks are sought for the summer... 9 Brussels warns Spain of the end of the free spending... 10 The challenge of harnessing the sustainable seam of... 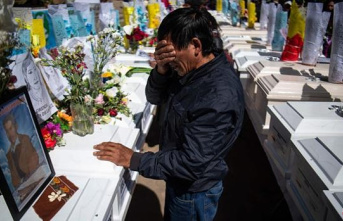 The Government of Peru apologizes for the 1985 Accomarca...