Don Juan Carlos leaves the door open "to reside in Spain in the future", as reported by the House of S. 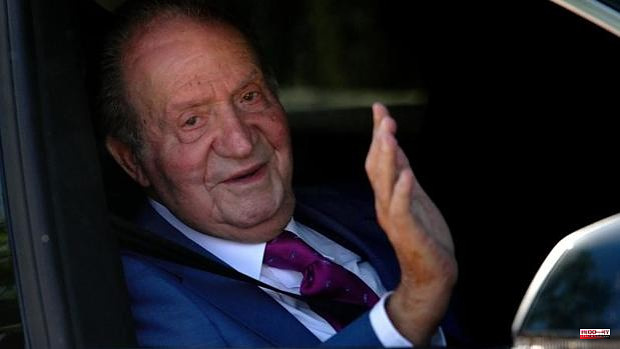 Don Juan Carlos leaves the door open "to reside in Spain in the future", as reported by the House of S. M. the King in a statement after the reunion in Zarzuela with his son, the King, 658 days after he established his residence in Abu Dabi.

After an eleven-hour day in what was their home and of which no image was provided, Felipe VI and Don Juan Carlos talked "about different events and their consequences in Spanish society since the King's father decided to move to Abu Dabi on August 3, 2020", was indicated in the statement distributed at 9:20 p.m., once the King's father left the Zarzuela.

This "conversation on family matters" between Felipe VI and Don Juan Carlos lasted "a long time." It was around four hours, as Zarzuela reported to ABC.

The need for prudence in the future is the main key in the messages that the King conveyed to his father. In addition, for future visits, an excessive exposure of Don Juan Carlos will be avoided.

It so happens that the King's mother could not share lunch "having tested positive for Covida on her return from Miami, although she has remained with the rest of the family in the lunch room provided with the mandatory mask and safety measures." corresponding ventilation”, reported Zarzuela.

From the House of His Majesty the King, no image was provided, as is usual in the activities and audiences of the Royal Family. “It is a private act”, it was indicated as an explanation prior to sending the statement, which was sent at 9:20 p.m.:

“As indicated in the statement made public by the House of S.M. the King last May 18, H.M. King Juan Carlos has been today with his family at the Palacio de la Zarzuela.

YE. The King and Don Juan Carlos have had a long conversation about family issues as well as about different events and their consequences in Spanish society since the King's father decided to move to Abu Dhabi on August 3, 2020.

Late in the afternoon, Don Juan Carlos has embarked on his return trip to Abu Dhabi. As was made public, in his letter to S.M. the King of March 5, Mr. Juan Carlos first stated his will to establish his permanent and stable place of residence in Abu Dhabi for personal reasons; and secondly, his decision to organize his personal life and his place of residence in areas of a private nature, both during his visits and if in the future he were to reside in Spain again, to continue enjoying the as much privacy as possible.

All this, together with the other points that appear in said letter, constitute the reference framework for the activities of H.M. King Don Juan Carlos".

As stated in his letter addressed to Felipe VI on March 5, Don Juan Carlos returns to Abu Dhabi, which is now his permanent residence without less than that his visits to Spain may be frequent and temporary and always staying in private homes. : "It is my purpose to organize my personal life and my place of residence in areas of a private nature to continue enjoying the greatest possible privacy," he said in that letter.

The reunion in Zarzuela was "family", "exceptional", typical of the "private sphere", according to sources consulted.

After the initial meeting with Felipe VI, Don Juan Carlos had lunch with the rest of the family with whom he was until his departure at 9:00 p.m. This day ended a four-day visit by the King's father after 21 uninterrupted months in the United Arab Emirates.

The stay - "discreet, low profile and confined to the private sphere", according to sources familiar with its ins and outs - was a pilot test for future trips by Don Juan Carlos to Spain.

He is expected to return by June 10 and stay here for more than ten days, circumstances permitting. The trip will begin, once again, in Sanxenxo, where he will spend two weekends in a row to sail aboard the Bribón500, which will once again compete in regattas in the 6 Meter category.

For this second trip, the father of Felipe VI will have more flexibility. Hence, between one weekend of regattas and the next, he plans to travel to other cities in Spain. Among them Madrid, where he will spend a few days -predictably at his daughter's house, the Infanta Elena-, to continue seeing relatives and, above all, spending time with friends. He will finish his second stay in Spain in Sanxenxo, which has become the point of arrival or departure of Don Juan Carlos.

In August 2020, when he headed to Abu Dhabi, he left from the Peinador international airport, in Vigo (Pontevedra). There he himself landed last Thursday for his first visit after almost two years in the capital of the United Arab Emirates. A few days that at first were marked by the expectation of his return and warm welcomes, by the almost 200 accredited journalists and members of the Real Club Náutico de Sanxenjo, as well as residents of the area.

Aware that his return was going to be very mediatic, Don Juan Carlos kept a low profile. As he expressed to those closest to him in Sanxenxo, with his visit he had only one objective: to normalize his situation. Show that he is a citizen like any other, that he is already retired and that he intends to spend time in his country.

Another of his intentions was not to make any statements that in the Zarzuela could reproach him yesterday, during the meeting with his son and subsequent family lunch. Hence, upon his arrival on Thursday and throughout the day on Friday, he greeted and made all kinds of gestures to return all the affection received, but at no time did he make any statements, beyond "I am very happy."

On Saturday he extended something more when saying «my return to Spain is being very good, you see». Already the Sunday responded with a "of what?" when he was questioned by a journalist about whether he was going to give explanations, as requested by the Government.

1 They spread the photograph of six of the murderers... 2 The weather in Valencia: the heat wave gives way this... 3 Up to 21 years in prison for the crime of the disappeared... 4 Iñaki Arteta, after the call to boycott: "Independence... 5 A chair brings together all the universities of Madrid... 6 The church of San Miguel de Talavera enters the Red... 7 The university will offer a master's degree in... 8 Prado, on the appointment of Feijóo: "You can... 9 Sangenjo breaks hotel occupancy records on the weekend... 10 ABC editor Montse Serrador will perform the Exaltation... 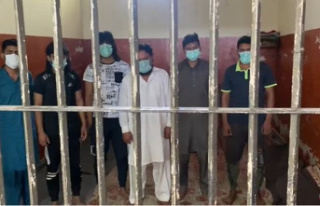 They spread the photograph of six of the murderers...