It was eleven o'clock in the morning when Felipe VI's crimson script was waving again next to the Spanish flag. 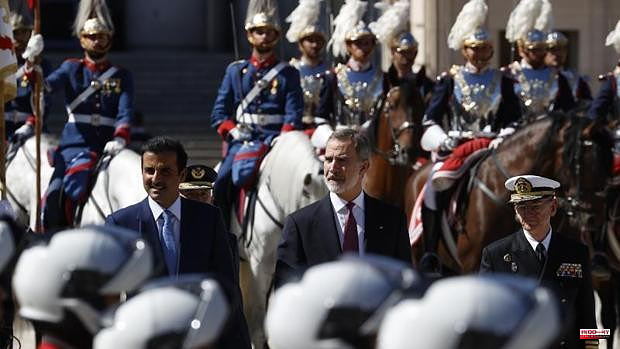 It was eleven o'clock in the morning when Felipe VI's crimson script was waving again next to the Spanish flag. The definitive sign that the King was already inside the Royal Palace of Madrid. The King and Queen arrived at their official residence to receive with Military Honors the emir of Qatar, Tamim bin Hamad al Thani, who is making a state visit to Spain this Tuesday and tomorrow, Wednesday, the first since he assumed his duties as president of Qatar in 2013 .

The Royal Guard interpreted the anthems of Spain and Qatar in the presence of the King and the emir, who was accompanied by his wife, Sheikha Jawaher.

After the welcome, which was also attended by the President of the Government, Pedro Sánchez, the President of the Congress of Deputies, Meritxell Batet, and the Minister of Foreign Affairs, EU and Cooperation, José Manuel Albares, among other authorities, the Emir of Qatar visited the Madrid City Hall, where it was received by Mayor José Luis Martínez-Almeida. He then he will move to the Senate and the Congress of Deputies.

At the end of the three visits, the emir will go to the Palacio de la Zarzuela where he will hold a meeting with Felipe VI. Next, the Kings will offer a lunch to the emir of Qatar and his wife.

This afternoon the Sheikh is scheduled to travel to the La Zarzuela Racecourse, where he will attend an exhibition on the grass track. He will also attend a video on the 81 years of racing and also the presentation of the proposed agreement between Hipodromo de la Zarzuela and Qatar.

In the evening, at half past eight, the King and Queen and the sheikh and his wife will return to the Royal Palace, where a gala dinner will be offered by Don Felipe and Doña Letizia in honor of the guests.

Tomorrow, Felipe VI and Pedro Sánchez will accompany the emir of Qatar to the Business Meeting organized by the CEOE. In addition to strengthening bilateral relations between Spain and Qatar, this state visit will serve to strengthen collaboration between the two countries.

1 Iturgaiz asks to inject one billion in aid to alleviate... 2 The Generalitat wants to make tobacco packages more... 3 The spokesman of the PP of Leganés, Miguel Ángel... 4 Spanish researchers create 3D printed acoustic holograms... 5 Russia expels two employees of the Finnish Embassy... 6 The University of Alicante renounces the Futsal Division... 7 The Tagus Festival will be held the first weekend... 8 Men from 25 to 34 years old and women, from 45 to... 9 The sale of registered housing increased by 14.1%... 10 Dismantled a gang that sold cocaine next to a school 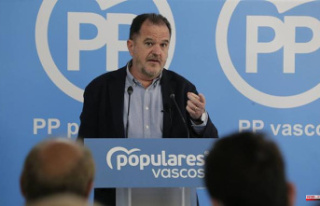 Iturgaiz asks to inject one billion in aid to alleviate...