First it was the entelechy of the non-existent «Catalan countries» coined by Joan Fuster and later came the false «national day» of June 24. 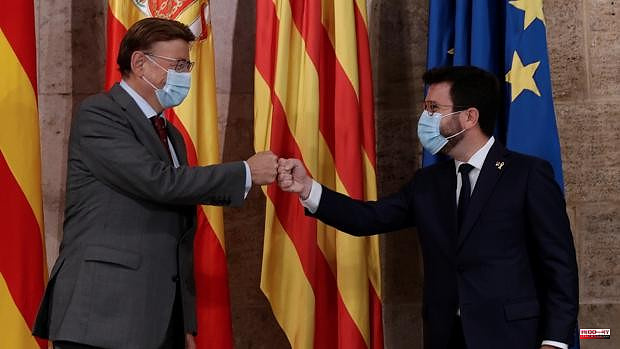 First it was the entelechy of the non-existent «Catalan countries» coined by Joan Fuster and later came the false «national day» of June 24. The Catalan independence movement and its satellites have tried in recent years to link the celebrations on the occasion of San Juan in the Spanish Mediterranean with a kind of "festival of the Catalan countries" in which they group the Valencian Community and the Balearic Islands.

The commemoration of a "national day of the Catalan countries" has neither tradition, nor social roots nor historical basis. In fact, contrary to the theses defended by the separatists, the "Catalan countries" have never existed as a political subject.

From a geopolitical point of view, the term "Catalan countries" aspires to group together a fictitious reality according to which Catalonia, the Valencian Community, the Balearic Islands, the eastern fringe of Aragon, Andorra, the French Roussillon, the Italian Alghero (in Sardinia) and El Carche (in the northeast corner of Murcia) should form a distinct and independent country.

The pretext for giving birth to this entelechy is that, from the standpoint of the separatists, the Catalan language is used in all these territories. In addition, in the case of San Juan, the excuse to propagate the idea of ​​a "national day of the Catalan countries" is the proliferation of celebrations around the date of June 24 in Catalonia, the Balearic Islands and the Valencian Community.

In this regard, the separatist entity Òmnuim Cultural has promoted in recent years the so-called "Flama del Canigó", which it defines as "the festival of lighting the fires of San Juan, a symbol of our identity" and which it considers "a popular festival rooted in throughout the Catalan countries». Among the routes planned this year, beyond Catalonia, there are planned in the towns of Vinaroz, in the province of Castellón, Guardamar del Segura, in Alicante, and in Mallorca.

The Generalitat de Catalunya has made this terminology its own and in official documents it mentions the festival of San Juan, of special relevance in the city of Alicante where the Bonfires are celebrated, in the section dedicated to the cultural heritage of the "Catalan countries".

In addition, publications that have the collaboration of the Department of the Presidency of Pere Aragonès directly include festivals such as the one in the city of Alicante or the festivals of the Night of San Juan in the Valencian town of Gandía in the catalog of popular festivals of the «Catalan countries ».

The idea of ​​a "national holiday of the Catalan countries" is as false as the fact that in the Balearic Islands, one of the autonomies included by the separatists in a fictitious "diada", this year's work calendar does not include June 24 as a holiday. Only in some municipalities, such as Palma de Mallorca, the day is established among the local festivities.

June 24 is a holiday throughout Catalonia and in the Valencian Community. In the latter case, the Generalitat, chaired by the socialist Ximo Puig, chose to add this date to the regional festival calendar due to the important tradition of the Bonfires of San Juan that exists in Alicante, where June 23 is also a local festival.

1 Winona Ryder goes grunge in Marc Jacobs Campaign Launching... 2 Chris Paul Throws a Sneaker-Themed 13-Year Old Son... 3 N.C. Man who won $10 million lottery sentenced to... 4 Biden sets New Zealand as an example to limit guns 5 Intercepted Recording Shows Russian Soldiers Almost... 6 Gazprom announces that it has already "completely"... 7 The trial for the Alvia accident will be held in the... 8 Mazón asks the European Commissioner for Food Safety... 9 This is how the Rolling Stones party was in Madrid:... 10 Alonso de Santos: «I have always looked for a joy...