Within the framework of the official program of Valencia World Design Capital 2022 and thanks to the support of the Hortensia Herrero Foundation, the Ron Arad 720° immersive art installation will open its doors next Saturday, June 4, at La Marina de Valencia. 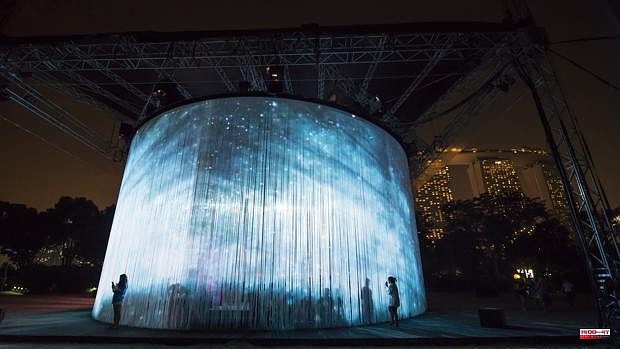 Within the framework of the official program of Valencia World Design Capital 2022 and thanks to the support of the Hortensia Herrero Foundation, the Ron Arad 720° immersive art installation will open its doors next Saturday, June 4, at La Marina de Valencia.

The proposal of the unclassifiable Israeli designer and architect unites art and technology through a monumental structure, called Curtain Call, which will house projections by outstanding artists such as Mat Collishaw or Greenaway

The project, conceived by Ron Arad, is in the form of a circular curtain eight meters high. Composed of 5,600 silicone rods suspended from a ring eighteen meters in diameter, it allows images to be projected to be viewed from both inside and outside.

The result is a multisensory and immersive 360-degree experience where the public becomes the creator and spectator of the artistic work.

Originally created for the London Roundhouse -an old railway depot converted into a performing arts venue- and after passing through Jerusalem and Singapore, the Hortensia Herrero Foundation brings this installation to La Marina, which will remain open to the public until August 28.

Hortensia Herrero, promoter of this immersive art exhibition in Valencia, intends with this installation «to bring art closer to Valencians and visitors to the city, as we have always tried. This time, with this structure by Ron Arad, we go further with a purely beautiful audiovisual experience that will envelop the viewer and make them part of the work itself. We trust that you will enjoy it and the surroundings of La Marina will be a point of pilgrimage and a cultural reference in the city of Valencia during the months that it is in progress».

For Xavi Calvo, director of Valencia World Design Capital 2022, "being able to host this great facility with an international reputation in our program of official events is a source of great pride that only strengthens our city as a world epicenter of talent, design, art and culture. And the Marina de Valencia is the most emblematic and special place to do it, on summer nights where you can sit and enjoy the sea and video art », he explained.

Access to the Ron Arad 720º exhibition will be free and the screening hours will be from Monday to Sunday from 9:30 p.m. to 1:00 a.m. (seven showings, every half hour).

He is a renowned designer and architect born in Tel Aviv in 1951. After studying at the Jerusalem Academy of Fine Arts, he moved to England where he enrolled in architecture. He became known in the eighties when, looking for iron for a sculpture, he discovered the seats of a Rover car and turned them into the first recycled armchair, the iconic Rover chair. That chance was the beginning of a career that has made him one of the most famous designers on the planet.

In 1989 he founded his own studio together with Caroline Thorman and, a few years later, he presented the Bookworm flexible bookcase, one of his best-known pieces produced on an industrial scale by Kartell. He has been head of the Department of Design at the prestigious Royal College of Art in London and a professor at the Hochschule in Vienna. In 2011 he received the Medal for Excellence in Design at London Design Week and in 2013 he was elected Honorary Academician at the Royal Academy of Arts in London.

Arad has exhibited in museums such as the MOMA in New York or the Center Pompidou in Paris, in addition to designing pieces for firms such as Vitra, Kartell, Moroso, Driade, Fiam, Alessi, Cappellini, WMF, Magis and Cassina.

The Hortensia Herrero Foundation was created in 2012 with the aim of promoting interest, knowledge and sensitivity for art and culture through projects created in the Valencian Community by artists from all over the world. The Foundation's work focuses on three areas: heritage restoration, dance and contemporary art.

Hortensia Herrero is president of the foundation that bears her name and vice president and majority shareholder of Mercadona, the first supermarket chain in Spain. Her philanthropic work is motivated by her desire to give back to the land where she was born and that she has given her so much.

1 Hablamos Español wins the support of the PP, Ciudadanos... 2 The left asks the PSOE for "transparency"... 3 Rafel Chirivella: «We work to have a regatta of prestige... 4 What is the injury that Rafa Nadal has? 5 The Government irrigates Andalusia with almost 80... 6 The promoter of the CGPJ closes the investigation... 7 The University of Alicante and Hidraqua will organize... 8 Weekly balance of covid in Castilla-La Mancha: more... 9 Suma lowers the cost of its management and generates... 10 Taxi protest this Wednesday between Neptuno and Colón... 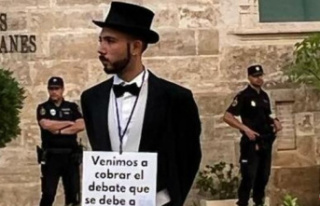 Hablamos Español wins the support of the PP, Ciudadanos...