In his assessment of the G7 summit in Elmau, the host Olaf Scholz has emphasized the "determination and unity" of the group's countries to continue supporting Ukraine and has once again condemned Russia's "brutal and ruthless" war of aggression . 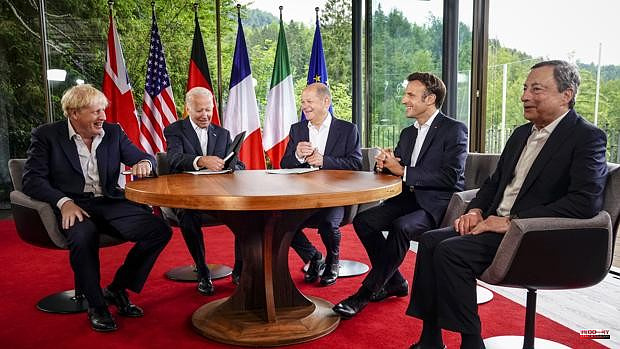 In his assessment of the G7 summit in Elmau, the host Olaf Scholz has emphasized the "determination and unity" of the group's countries to continue supporting Ukraine and has once again condemned Russia's "brutal and ruthless" war of aggression .

New sanctions against Russia emerged from this meeting, such as the interruption of the supply chains of military material to Moscow and the embargo on Russian gold, in addition to the determination that "the sanctions will continue until Putin signs peace with Ukraine" and not when the first ceasefire comes into force.

While posing for the family photo, Boris Johnson joked about taking off their shirts and "showing pecs" to show they are not afraid of Putin. The opportunity to tell the Russian president face to face could come at the next G20 meeting, to be held in Bali in November and which they have promised to attend even if Putin goes. However, the organization of that meeting has ruled out the physical presence of the Russian president for now.

In the final document, they undertake to study a price cap on gas and oil imports from Russia, although both Germany and the EU see its application as problematic. "Now it is even more important to have close friends and allies around the world," said the German chancellor, who has promised to organize a donors' conference before the end of the year to make possible the rapid reconstruction of Ukraine as soon as the war ends. war.

The G7 says goodbye with a work schedule adjusted to the declarations of the Ukrainian president Zelenski, who in a videoconference connection has described his intentions to end the war before winter. "But now it is still too early to negotiate with Russia, because we still need to strengthen our positions," he added, while calling for "unlimited" support until the time comes. And he got it. The G7 has added financial aid to Ukraine worth 29,000 million and external support "for as long as necessary".

In his conclusions, Scholz has also highlighted "the great power of democratic alliances", to which he has added India, Indonesia, Argentina, Senegal and South Africa, countries invited to the summit and entertained by the G7 with a great investment plan in infrastructure with which they hope to win the loyalty of large emerging economies in the south.

“It is clear that the weight and relative influence of the economies of the South will have grown significantly in the near future, say in 2050, and we hope that this new influence will be for the good of the world, for a multipolar global society that works multilaterally, together for the good of all”, has described the paradise that the G7 would like to design, an Eden in which the new economies feel closer to what is now the West than to Russia and China.

The summit document includes, by the way, accusations against China of "practices that distort the global economy" and the G7 countries have promised to share information on this type of action in the future, in addition to affirming that they will seek to "reduce the strategic dependency" on China.

"With regard to China's role in the global economy, we are consulting on collective strategies, beyond the G7, in the face of the challenges represented by policies and practices that distort the global economy," says the paragraph, "we are going to build shared knowledge on China's non-transparent practices and market-distorting interventions'.

The chancellor also announced a joint action against hunger in the world. The G7 countries will invest 5,000 million in this section, an amount less than those destined for other purposes and justified by Scholz as "an important brick in a wall that we all have to build together, not only in this forum."

Ensures that the G7 does not lose sight of long-term tasks such as climate protection and reaffirms the clear goals of the G7 to reduce dependence on oil and gas from Russia, as well as promote the expansion of renewable energy, welcoming the agreement for his proposal, the foundation of the so-called 'Climate Club' at the end of the year. But the fact is that they watered down a key promise to end the financing of fossil fuels.

As rotating president of the G7, the chancellor has emphasized the need for "these direct bilateral conversations, which go far beyond reading reports or sharing declarations, and the importance of the summits". "A lot of relaxed trust has developed between us and it will help us a lot in the near future," he said.

1 Escrivá's assignments to save the self-employed... 2 This is the judicial “ordeal” to enter the National... 3 Delgado faces his first Fiscal Council after the punishment... 4 The Bildu-Sánchez pact in the Democratic Memory Law... 5 Carmen de Rivera: «The best thing about Ciudadanos... 6 Spain and the US resume dialogue after an agreement... 7 The murderer of the Lardero boy, transferred to Logroño... 8 There is a message for you: celebrities learn to monetize... 9 30 percent more lifeguards and surveillance even by... 10 Lasso retains the presidency and defeats the opposition... 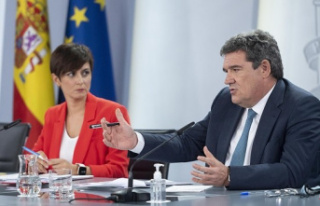 Escrivá's assignments to save the self-employed...