The families of Villa de Pitanxo will sue the boss, his nephew and the shipowner

The families of the 21 victims of the Villa de Pitanxo shipwreck - at least "a large block of them" - will file a "criminal complaint" against the ship's skipper, Juan Padín, his nephew, Eduardo Rial, and the shipowner, Grupo Nores . 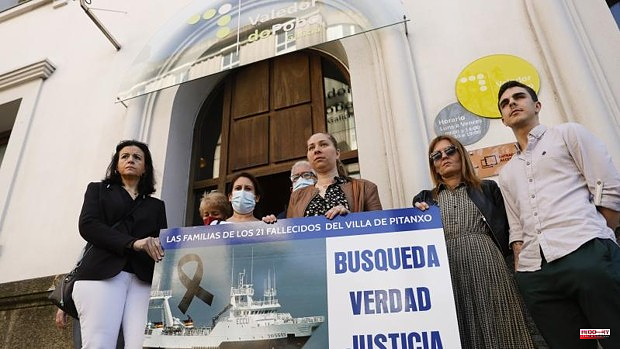 The families of the 21 victims of the Villa de Pitanxo shipwreck - at least "a large block of them" - will file a "criminal complaint" against the ship's skipper, Juan Padín, his nephew, Eduardo Rial, and the shipowner, Grupo Nores . It was announced this Saturday by the spokeswoman for the relatives, María José de Pazo, daughter of the machinist sunk in NAFO waters, 450 kilometers from Newfoundland, Canada, on February 15, after meeting in the Presidency of the Xunta with the head of the Galician government, Alfonso Rueda.

The complaint covers the alleged crimes of recklessness, serious crimes against the health of workers, false documents and cover-up. De Pazo explained to the media that they are now taking this step, after just over 100 days, because they have the support of the conclusions reached by "highly qualified technical experts, collaborators and people who altruistically they have collaborated from the first moment", who agree that "here is a case of criminal responsibility".

Padín, one of the three survivors of the shipwreck, along with his nephew and the Ghanaian crew member Samuel Kwesi, will have to testify as the only one investigated before the National High Court finally on June 6, after the initial date of May 31 was postponed. Rial and Kwesi will also have to testify, but as witnesses. The version of the facts offered by the latter after the arrival of the three in Spain has put Padín in the pillory, who will now have to face the lawsuit. The spokeswoman for the families has also explained that the central court of the National High Court has informed them that the expansion of the Civil Guard report has been incorporated into the preliminary proceedings.

The relatives have been received in San Caetano, headquarters of the Xunta, for an hour, by President Alfonso Rueda and his Minister of the Sea, Rosa Quintana. In statements before participating in a subsequent act, also in Santiago, Rueda explained that he has promised to the families - five representatives have attended, including De Pazo - to transfer their demands to the President of the Government, Pedro Sánchez, when he grants you the hearing you recently requested by letter. In any case, before he will seek to agree on a common position of the autonomous community in other meetings, also pending, with the opposition spokesmen (BNG and PSOE). Families value it positively, since they do not seek "partisan" support.

Rueda has assured that not only do they support his "claim" that an underwater robot access the wreck to carry out "inspections and checks", but that he considers that it is a "logical request" and a "matter of humanity and reasonable". The president, as the spokeswoman has also said, has recalled that the families are not asking for a refloating of the fishing boat or a rescue of the 21 bodies, but rather to transfer technology to, as the representative of the families has underlined, to obtain "evidence » that serve to « clarify » what happened on that unfortunate day in February.

Beyond the words of support, the president of the Xunta has offered the collaboration of the Galician government to charter the robot and the side-scan sonar that a Norwegian company would provide "free of charge", both Rueda and the spokesman. However, the president recalled, "the bulk of the operation depends on the availability" of a ship provided by the Government to take said technology to the area of ​​the shipwreck. De Pazo has asked Sánchez, in this sense, to pick up the "glove" and to do so as soon as possible, to undertake the operation in the summer months, taking advantage of the good weather.

The families, who have appreciated the support provided by the Xunta, have insisted at this Saturday's meeting that they have reports that "prove" that the Government has "several oceanographic research vessels", which could transfer the technology to reach the wreck and gather evidence. In their race against time for the Government to listen to their claims, the families receive a new accolade. Last Tuesday the spokeswoman was already received in Vigo by the King, during the inauguration of a naval fair. Don Felipe wanted to spend a few minutes asking about the families, who in turn stressed that the Royal House periodically checks to see how they are doing. For them, as well as for all those institutions and personalities that support them, the relatives have returned to have words of thanks, after a hundred days of anguish.

1 Spain will send 100 more soldiers to Latvia with the... 2 Streets closed and EMT lines diverted in Valencia... 3 Champions League: Liverpool – Real Madrid, an ever-enduring... 4 Dordogne: A singing workshop around "My Fair... 5 Saint-Porchaire is always available for the Food Bank... 6 Puente believes that García-Gallardo can come out... 7 The referee of the Champions League final will be... 8 Zelensky predicts a world food crisis: Why the invasion... 9 Legislative in the Pyrenees-Atlantiques: the RN Francois... 10 Roland-Garros: Iga Swaitek moves up to eighth place,... 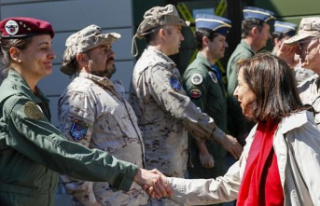 Spain will send 100 more soldiers to Latvia with the...