At a quarter to twelve this Thursday, the Custody of Arfe made its exit, through the Llana door of the Cathedral, thus marking the reunion of Toledo with its Corpus Christi -declared of International Tourist Interest-, a celebration that this year has been marked by high temperatures and suffocating heat, it has not prevented thousands of people from occupying the main streets and squares of the historic center so as not to miss any moment of this festivity. 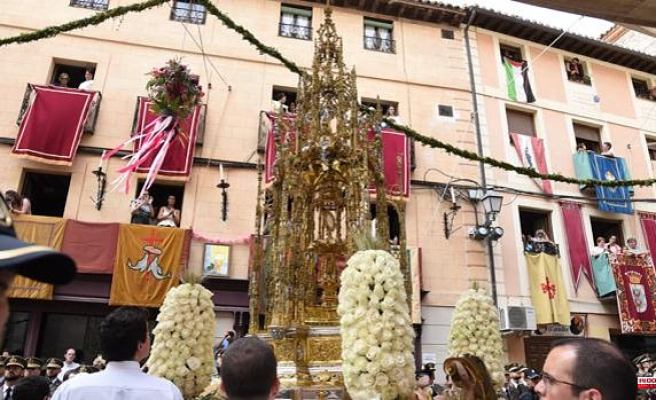 At a quarter to twelve this Thursday, the Custody of Arfe made its exit, through the Llana door of the Cathedral, thus marking the reunion of Toledo with its Corpus Christi -declared of International Tourist Interest-, a celebration that this year has been marked by high temperatures and suffocating heat, it has not prevented thousands of people from occupying the main streets and squares of the historic center so as not to miss any moment of this festivity.

With temperatures that reached close to 40 degrees, the regional capital has looked brighter during the tour, and as tradition marks, it has passed under the awnings -four kilometers long- that have been installed and from which the garlands of boxwood.

Flowers are the main protagonists in this Corpus which is attended by florists from all over the country, who have decorated the streets with more than 14,000 stems of carnations, geraniums or daisies installed in pots and flower arrangements that are highly appreciated.

In this ancestral decoration, the elements that have remained under closure during the two years of the pandemic have not been lacking: the 346 flower and plant cabinets, the 100 wrought-iron lanterns, the candles, the paintings, the 48 historical tapestries, the flags , manila shawls, the 330 banners with Eucharistic motifs and the aromatic plants that have enveloped the city since the early hours of the morning, to remind those nostalgic for the festival that this Thursday the Blessed Sacrament has once again paraded through the streets.

To alleviate the high temperatures that have shaken Spain in recent days and that have been evident in the regional capital this Thursday, the City Council has distributed 10,000 bottles of water and 8,000 fans that have not avoided serving more than sixty people for part of the Red Cross and Civil Protection troops.

The celebration of the Corpus of the reunion began at 8:00 in the morning with the firing of the royal bombs and the parade of 'Gigantones and the Tarasca', giving way at 10:00, and with the presence of both the regional authorities, Provincials of the Mass in the Hispano-Mozarabic rite, which the Archbishop and Primate of Spain, Francisco Cerro, has presided over for the first time since his arrival in Toledo.

During his homily, the prelate encouraged to look at Christ as a "remedy to loneliness" and to recover "hope" in a world that has lost it. "We have almost no hope at all," he assured. Faced with the feeling of leading "a languid, sad or discouraged life", one must ask oneself "if we have contact with Christ", said Cerro Chaves, who has been convinced that hope is not achieved "with substitutes".

Francisco Cerro, in the first blessing that he offered in the central Plaza de Zocodovar, recalled that "after this experience that we have had over these years (of the pandemic) we are rediscovering our roots, our happiness, our joy" and has asked for "so many people that we would like to be with us", for peace and for those who suffer.

His speech ended with a round of applause from the hundreds of attendees who, sitting in their chairs, have patiently awaited the arrival of the custody. After the blessing, Franco Cerro has once again set out on the road to the cathedral.

For her part, the mayor of Toledo, Milagros Tolón, welcomed the fact that Toledo residents can experience “the Corpus of reunion” without restrictions. An important day full of feelings, she has said. "Today is the Corpus of the reunion where we can finally live and feel this experience as beautiful as the Corpus in a world heritage city such as Toledo," he said in statements to the media before attending the holy mass in the temple primate.

After wishing a happy Corpus Christi to Toledo, he hoped that residents and tourists can enjoy this "so special" festivity, declared of international tourist interest.

Likewise, the president of Castilla-La Mancha, Emiliano García-Page, has wished all Toledo a happy Corpus Christi and has been confident that "people are going to celebrate" this year -after the parenthesis of the pandemic- " like three corpora in one”.

Speaking to the media at the gates of the Cathedral, before participating in the holy mass, García-Page wished that the Corpus Christi, declared of international tourist interest, would take place without incident and thus be able to celebrate "such a centennial party" , which is liked -he has said- «regardless of religious beliefs».

For her part, the Government spokesperson and Minister of Territorial Policy, Isabel Rodríguez, did not want to miss the Corpus Christi festivity in Toledo this Thursday, “an explosion of joy and citizenship.” "It is a festival that unites the people of Toledo and that unites the Castilian-La Mancha people", said the minister in statements to the media from the balconies of the Government Delegation, where she witnessed the arrival of the Custody of Arfe to the square of Zocodover.

As Isabel Rodríguez explained, Corpus Christi is "a big party" that implies "an explosion of citizenship and sharing", which in this case, moreover, is celebrated after two years of pandemic where "we have been repressing that need to be together, to party and celebrate", he repeated to emphasize that despite the high temperatures experienced this Thursday in Toledo, "we can enjoy the aromas that this festivity brings us".

Finally, the president of the Popular Party of Castilla-La Mancha, Paco Núñez, has highlighted that the Corpus is a "sensational showcase" for Toledo and for our land, and has appealed to the deep feeling of faith and love that this religious celebration entails. for the region. that religious sentiment to do it around their faith”, he said.

As usual, numerous authorities have covered the Blessed Sacrament upon his arrival from the procession to the Plaza de Zocodover and the Archbishop's address from the windows of the Government Delegation has been heard, among other personalities such as the ambassadors of Tunisia and France, Fatma Omrani and Jean Michel Casa, the former Minister of Defense, José Bono, and the designers Ulises Mérida and Félix Ramiro.

The procession has also followed, from a balcony on Calle Ancha, the former president of Castilla-La Mancha and former Minister of Defense María Dolores de Cospedal.

One more year, those attending this new procession have applauded the security forces, the civil guard and the cadets of the Infantry Academy who have paraded down the Cuesta de Carlos V amid cheers and who have been in charge to end this religious ceremony. The great festival of Toledo.

1 Noel dies, the boy who managed to raise more than... 2 The Diputación de Alicante allocates 120,000 euros... 3 Puig asks for "respect" for Justice after... 4 The Gil-Albert awards Martínez Nadal and premieres... 5 Neighbors denounce the Barcelona City Council for... 6 "I knew the facts from the beginning": the... 7 Historical record of forced displacement: 100 million... 8 Ukraine registers between 200 and 500 daily casualties... 9 Tension increases in Argentina due to the arrival... 10 France, Germany, Italy and Romania support the "immediate"... 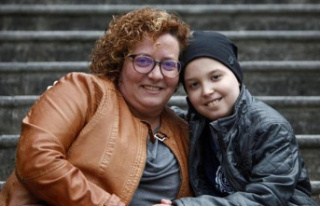 Noel dies, the boy who managed to raise more than...