León has released this Sunday the recognition of Good of Tourist Interest of the Community for the Corpus Chico festivity, an achievement promoted by the Royal Brotherhood of the Santísimo Sacramento de Minerva and Santa Vera Cruz. 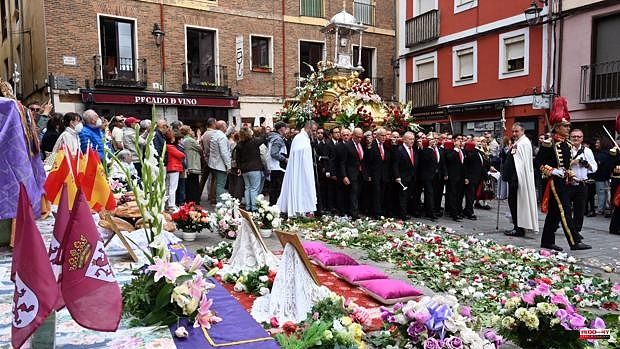 León has released this Sunday the recognition of Good of Tourist Interest of the Community for the Corpus Chico festivity, an achievement promoted by the Royal Brotherhood of the Santísimo Sacramento de Minerva and Santa Vera Cruz. Founded in 1612, in the 16th century the bull of Pope Paul III gave this brotherhood the task of dignifying the veneration of the Blessed Sacrament.

The party got lost, was recovered in 1937 and promoted since then. The placing on the shoulders of the Paso del Santísimo, which started with 23 braceros and is now around 150, the extension of the route to the Mercado neighborhood (on the 400th anniversary of the founding of the brotherhood), the transfer on two occasions of the custody of Enrique de Arfe, owned by the Sahagún City Council, or the recovery of the Pendoneta del Santísimo are examples of this growth.

Citizens are involved with the placement of the altars in the Plaza de San Martín, Calle Herreros, Santa Cruz and Plaza Mayor; The Conceptionist Mothers and the Carbajalas Mothers pray and sing to the Blessed Sacrament during the procession and the municipal corporation attends accompanied by the maceros.

The uniqueness of the processional act for the most typical Lion led the Junta de Seises to dream of an official declaration that recognizes its importance, highlighting the task of the brotherhood, the San Martín neighborhood and the city, and that would have a social impact. , tourist and economic, as recalled in the program of the festivals of San Juan and San Pedro that the city experiences these days.

The steps began with the presentation of a first dossier in 2005 by the Governing Board, but recognition was not achieved. The brotherhood resumed the efforts in 2017, with the creation of a commission in charge of preparing a dossier justifying the petition. In addition, the municipal plenary session, in March 2019, approved a petition for the Corpus Chico festival to be declared an Asset of Regional Tourist Interest by the Board.

On June 15, 2021, the Culture and Tourism Commission, unanimously, approved the No Law proposal, which urged the streamlining of procedures and the consequent recognition, published in the Official Gazette of the Courts of Castilla y León. in May 2021 and officially communicated on February 24, 2022 to the abbot of the Brotherhood.

1 Palomeque celebrates its patron saint festivities... 2 The fire of the stacked chairs of a bar in Valladolid... 3 Eight floats parade in the Cavalcade of the Festivities... 4 Agreements with 11 municipalities to open school canteens... 5 The mayor of a town in Barcelona dies after two straw... 6 The unknown Zelenski is resolved at the Madrid Summit:... 7 The Urbania, fifth after the long regatta of the ORC... 8 Javier Gayo's "Yamamay" confirms the... 9 Gunnar Biniasch makes history by winning the first... 10 Alfredo González and Cristian Sánchez, winners of... 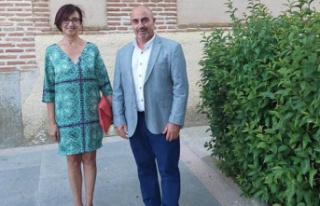