The Catalan Government spent 3,250 euros on a luminous advertisement in Times Square that was displayed for only 24 hours

The Catalan Government has spent 3,500 dollars (about 3,250 euros) for a luminous advertisement in Times Square in New York (United States) that was visible 24 hours on April 26. The Catalan Government has spent 3,500 dollars (about 3,250 euros) for a luminous advertisement in Times Square in New York (United States) that was visible 24 hours on April 26. To 'inaugurate' the advertisement, which promoted the use of the Catalan language on the Internet, the Vice President of the Generalitat, Jordi Puigneró, traveled to the United States with an entourage whose overall cost was 38,720.22 euros.

According to three separate responses to the PSC, Vox and Cs, published today by the Official Gazette of the Parliament of Catalonia, Puigneró himself has reported the amount of a trip that took place between April 25 and 28 of this year and in which the regional vice president was accompanied by at least seven people to participate in the High Level meetings of UN Habitat, including the presentation of a collaboration agreement between the UN and the Generalitat on the Lands of the Ebro.

Taking advantage of the trip, Puigneró indicated in the answers consulted by ABC, the department that the highest representative of Junts in the Government presented the Aina project (a 'software' for technology to use the Catalan language) to the Catalan-speaking community in the United States , in particular, and America, in general, through an act that was broadcast live by Ràdio Amèrica BCN.

«Within the framework of this act, the Government projected an advertisement on one of the screens in Times Square in which the need for Catalan to be present on the internet and in the digital age was claimed, promoting the participation and dissemination of the language Catalan and the Aina project", stated the Vice President of the Generalitat, who added that during the 24 hours that the advertisement was shown, it was screened 480 times.

Puigneró and his entourage also met with "entities for the defense of fundamental digital rights", moments in which the Catalan Government took the opportunity to "denounce the acts of espionage by Pegasus and the case of the 'Catalan Gate' and claimed the need to a joint international offensive and action to clarify the facts and start the task of creating and approving a charter of fundamental digital rights at European and global level.

In addition to Puigneró, the director general of Digital Nation and Urban Agenda, Maria Galindo, also traveled to New York; the director of the Office of the Vice President, Xavier Catarineu; the head of the Communication Office, Vanesa Hernández; the head of the Cabinet of External Relations and Protocol, Francesc Xavier Miret; the director of the Catalan Soil Institute (Incasol), Mercè Conesa; another unidentified member of Incasol and the escort of the vice-president of the Generalitat.

1 Poland changes its judiciary law and demands that... 2 An Irish driver arrested for traveling at 285 kilometers... 3 The TC says that the sanction for obstructing the... 4 Calculate how much your electricity bill is left with... 5 What you should know and what rights you have if your... 6 Research should not cause harm: New guidance addresses... 7 Nyheim Hines - Matt Ryan doesn't miss the layups... 8 Little Casesars replaces Pizza Hut as NFL's official... 9 Bruce Smith: Tony Boselli's Hall of Fame campaign... 10 Commanders sign Justin Hamilton, Willie Beavers 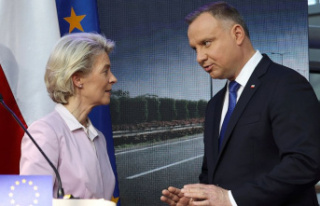 Poland changes its judiciary law and demands that...