A bull with caste, a bullfighter with relaños and a coat. 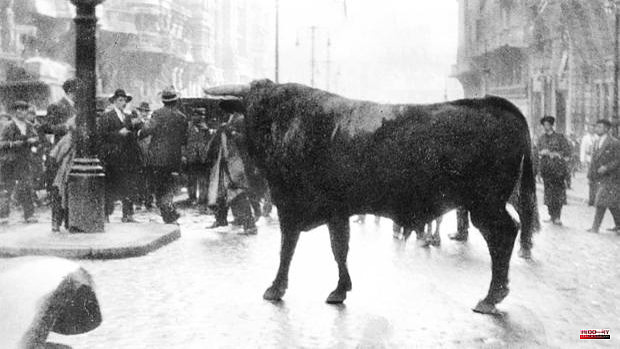 A bull with caste, a bullfighter with relaños and a coat. It doesn't take much more to write a story. Let them tell Diego Mazquiarán, 'Fortuna', and the thousands of people from Madrid who saw him make several passes and end up stabbing an imposing bull in the middle of Gran Vía, at the height of the San Luis Network, as if that were the Sales Square.

On top of that, it was a cold day in Madrid in inclement January of the year 1928, at eight in the morning. The bull, it seems, was being driven along the Extremadura highway when it got out of hand and, in the company of a cow, began to roll along the Madrid asphalt: first it climbed the Segovia bridge, then it entered the Paseo de la Virgen del Port, and ended up going up the Cuesta de San Vicente and reaching the Plaza de España, despite the strenuous efforts of the cowboy who tried to redirect him.

With the consequent fright of passers-by.

The ABC chronicler recounts how at this point several spontaneous people emerged, fans of the art of Cúchares, who tried to deal with the little animal. But it was a lot of bull for simple dilettantes. So the bull and the cow continued on their way, causing enormous alarm in the streets, where the shops and the portals were closed in their path.

Up Leganitos, the bull was running rampant, and took a 66-year-old woman, Juana López López, who did not have enough agility to get out by legs. She was flipped over and was left with multiple concussions and seriously injured. She was not the only one: Anastasio Martín, an orderly from the Hospice Police Station, was also hit with a blow to the buttock. And Andrés Domínguez, a 67-year-old citizen, after his encounter with the bull, had to be assisted at the Casa de Socorro in the Palacio neighborhood.

Between charges and races, the bull reached the market square, where "the many buyers ran in all directions," says the chronicle. The baskets flew, dropping the food on the ground. The animals bumped into some stalls and knocked down their contents. Thus, his walk reached the Gran Vía, already at eleven in the morning.

As luck would have it, the bullfighter Diego Mazquiarán, 'Fortuna', who was going with his wife to visit her parents, passed by at that moment. Seeing what was happening, he pushed his wife aside, took off his coat to use as a crutch, and began giving her bug passes. From the Military Casino, where they were observing the scene, they sent the bullfighter a saber to use as a sword; something that did not work, so the right-hander sent a boy to his house to give him the rapier.

The kid took fifteen minutes to return, and that's the same time that 'Fortuna' made the task last. Already armed with the rapier, he made a first incursion, observing that it was not enough, and used the pithing to finish off the animal, to applause from the improvised audience.

The beef was left lying on the cobblestones, the public applauded and among them a group stood out that lifted the right-hander on their shoulders and took him to a cafe on Calle de Alcalá.

1 This is how you buy a dream villa for 300,000 euros 2 Buying houses with cryptocurrencies is still a plot 3 Shared cars just for them 4 'Vtubers', the new phenomena of social networks... 5 I have a connected tractor: innovation leaves its... 6 The new brilliance of self-consumption dazzles foreign... 7 A key trident in the new economy is threatened by... 8 Technological endpoint of radiation at Chernobyl amid... 9 The bank squeezes the vein of commissions with its... 10 Vaison-la-Romaine. The girl is out of danger after... 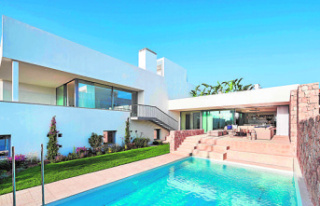